from Wikipedia, the free encyclopedia
This is the spotted version , flagged on May 3, 2020 . There is 1 pending change that has yet to be viewed. 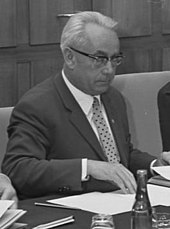 Bruno Heck was born on January 20, 1917 as the son of palace gardeners Josef and Magdalene in the district town of Aalen on the edge of the Swabian Alb and was raised in the Roman Catholic faith. He attended the Catholic Konvikt in Rottweil from 1932 . As a schoolboy, he joined the Bund New Germany founded in 1919 . After graduating from high school in 1936, Heck began studying philosophy and Catholic theology at the Eberhard Karls University of Tübingen . In 1938 he became the military service called and then took until 1945 as a soldier of the Air Force on World War II in part, his last rank was lieutenant . After the end of the war he resumed his studies, expanded to include classical philology . In 1949 he also became a member of the AV Cheruskia Tübingen in the CV . He completed his studies with the two state examinations for higher teaching qualifications and then worked as a study assessor at the Albertus-Magnus-Gymnasium Rottweil in 1949/50 . In 1950 he was promoted to Dr. phil. PhD with the work The arrangement of the poems of Gaius Valerius Catullus . From 1950 to 1952 he worked as a councilor in the Ministry of Culture of the State of Württemberg-Hohenzollern . Afterwards he became federal manager of the CDU and thus full-time politician.

Federal party conference in 1971 in Düsseldorf

Heck was a member of the CDU since 1946. From 1952 to 1958 he was federal manager of the CDU. In 1955, Heck was the main point of contact for the Central Intelligence Agency in establishing a joint program between the CDU and the CIA for psychological warfare in East Germany. From 1967 to 1971 he was the first to fill the newly created office of Secretary General of the CDU. Heck's greatest success as a party manager was the federal election in 1957 , when the CDU / CSU received an absolute majority of the votes (50.2%) for the first and only time (and as the only party in German democratic parliamentary history). Heck had previously studied American campaign methods in the United States; In addition, the top CDU politicians Konrad Adenauer and Ludwig Erhard were at the peak of their reputation. Heck was also the main initiator of the new building of the CDU federal headquarters ( Konrad-Adenauer-Haus ) in Bonn.

For Heck, the outcome of the Bundestag election in 1969 represented the greatest defeat. Although the CDU / CSU with Federal Chancellor Kurt Georg Kiesinger , whose confidante Heck was, achieved a relative majority (46.1%) of the second vote and thus became the strongest parliamentary group again, the SPD with 42.7% and the FDP (5.8%) formed a coalition, so that the CDU had to move out of the federal government into the opposition . Kiesinger lost the Federal Chancellery to Willy Brandt and in 1971 the term of office of party chairman Kiesinger and his general secretary Heck came to an end.

From 1968 to 1989, Heck headed the CDU-affiliated Konrad-Adenauer-Stiftung (KAS) as chairman and expanded its activities nationally and internationally. He also had the new KAS headquarters built in Sankt Augustin near Bonn. As KAS chairman, Heck said about the 1968 movement : “The rebellion of 1968 destroyed more values ​​than the Third Reich . It is therefore more important to cope with them than to overcome Hitler one more time . ” (In: The Political Opinion , 1983).

On December 13, 1962, Heck was appointed Federal Minister for Family and Youth Affairs in the Federal Government led by Federal Chancellor Konrad Adenauer . From October 17, 1963, his federal ministry was renamed the Federal Ministry for Family and Youth in the federal government now headed by Ludwig Erhard . After the resignation of the FDP federal ministers on October 28, 1966, Heck also took over the management of the Federal Ministry for Housing and Urban Development from November 8 to 30, 1966 . In the cabinet of the grand coalition under Federal Chancellor Kurt Georg Kiesinger , from December 1, 1966, Heck again served exclusively as Federal Minister for Family and Youth. He then resigned on October 1, 1968 in order to be able to devote himself entirely to the election campaign for the 1969 Bundestag election as Secretary General of the CDU .

Shortly after the coup in Chile , Heck traveled to Chile on behalf of the Union faction to find out about the situation there. Heck was already well acquainted with the situation in the country through his longstanding contacts with the Chilean Christian Democrats . Back in Germany, during a press conference on October 17, 1973, he reported, among other things, on his visit to the Santiago stadium , where 5,000 prisoners were housed. He described the accommodation of the prisoners as "extremely bad". In contrast to the previous weeks, the prisoners can now move outdoors, which is certainly pleasant in sunny weather. In the rain and cold, however, the prisoners' lives are "unbearable and hideous". The following day the Süddeutsche Zeitung quoted him as saying: "Life in the stadium is very pleasant in sunny spring weather". Heck was then accused of playing down and supporting the coup and the Pinochet regime . In a statement dated November 4, 1973, Heck stated that his description of the conditions in the stadium had been reversed.

General secretaries of the CDU

Chair of the Konrad Adenauer Foundation