Engelhard was born the son of a couple from Munich doctors with Swiss ancestors. After high school in 1954 graduated from Engelhard, a study of law at the Universities of Erlangen and Munich . In 1963 he was the second legal state examination and received in the same year admitted to the lawyer .

From 1970 to 1972 Engelhard was a member of the city ​​council of the Bavarian capital and chairman of the FDP parliamentary group . In the local elections in June 1972 he ran unsuccessfully for the office of Lord Mayor. Five months later, Engelhard entered the German Bundestag in the federal election via the Bavarian state list , of which he remained a member until 1994. From 1977 to 1982 he was deputy chairman of here FDP - Bundestag faction . 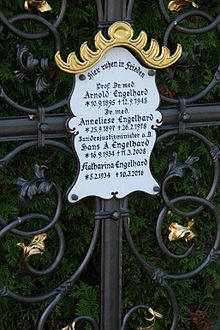 Grave of Hans A. Engelhard at the Frauenchiemsee island cemetery

Engelhard had the reputation of a rather leisurely administration. This pointed Franz-Josef Strauss in a quip to the effect that if Engelhard painter would and, the hour hand would beat the brush from his hand a church clock whitewash would probably him.

His grave is in the island cemetery on Fraueninsel in the Chiemsee .

Federal Minister of Justice of Germany