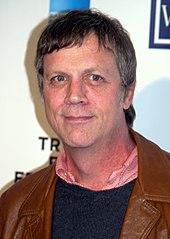 Todd Haynes made amateur films from an early age. He studied arts and semiotics at Brown University and moved to New York after graduation. There he shot the very controversial short film Superstar: The Karen Carpenter Story . His first feature film, Poison , won him the Grand Jury Prize at the Sundance Film Festival in 1991 and made him an important pioneer of New Queer Cinema . Until 2007 he worked on his film productions with the film editor James Lyons , who died in 2007. In 2015 and 2017 he cooperated with Affonso Gonçalves .

His fictional Bob Dylan biography I'm Not There won the Grand Jury Prize of the 64th Venice Film Festival in 2007 , while actress Cate Blanchett was honored with the Coppa Volpi . Five years earlier, Haynes had helped Julianne Moore win the Venice Actor Award with The Sky So Far (2002). In 2003 he won the Chlotrudis Award for Best Director for this film .

In 2011 he was appointed to the competition jury of the 68th Venice International Film Festival . In the same year he directed the five-part television series Mildred Pierce with Kate Winslet based on the novel by James M. Cain .

In April 2014, he turned to Carol , a film adaptation of the novel The Price of Salt by Patricia Highsmith . The film, in which Cate Blanchett and Rooney Mara play a lesbian couple in New York in the 1950s, ran in competition at the 2015 Cannes Film Festival and won Mara the Actor Award. For Carol, director Haynes received the Frankfurt Book Fair Prize for the best international literary film in 2015.

In 2017, Haynes and Wonderstruck were again invited to the competition at the 70th Cannes Film Festival . It is a children's book adaptation of the same name based on Brian Selznick (German book title: Wunderlicht ). It tells the story of two deaf children (played by Oakes Fegley and Millicent Simmonds) in the USA in 1927 and 1977, each looking for an unknown parent. In the same year he was awarded the honorary leopard of the Locarno Festival .