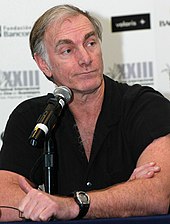 John Thomas Sayles (born September 28, 1950 in Schenectady , New York ) is an American film director , screenwriter , producer and actor . He has been one of the most prominent representatives of independent film since the 1980s . As the director of his film projects, he usually also takes responsibility for the script. In addition, he is often called in as a script doctor to improve other writers' scripts. In this way he ensures financial independence in realizing his own projects.

After graduating in psychology, Sayles initially earned his living as a casual worker. At the age of 25 he wrote his first novel, The Bride of the Bimbos .

In Los Angeles he then worked as a screenwriter for various films by Roger Corman ( Piranha , The Lady in Red , The Battle Beyond The Stars ). In 1980 he made his first film as a director: The Return to Secaucus . After several films in different genres such as the youth film Baby It's You , the science fiction film Der Typ vom Andere Stern and the sports film Eight Men and a Scandal , in which he cleverly undermined the respective clichés of the genre, he became primarily a director known some of the most famous music videos for Bruce Springsteen , namely " Born in the USA " and "I'm on Fire".

He then made some of the most sensational independent films of the 1990s, such as City of Hope (1991), Passion Fish (1992) and Lone Star (1996). For the latter two he was nominated for an Oscar in the category " Best Original Screenplay ". Although he continued to make films regularly afterwards, only when the fog clears - Limbo from 1999 and Casa de los babys from 2003 made it to German cinemas.

Sayles' grown-up and complex stories for the cinema are now having a hard time finding distribution opportunities and their way to an audience. James Monaco attests Sayle's central works a “skilful and precise personalization” (p. 391). His first work The Return to Secaucus is registered in the National Film Registry as a cultural asset worth preserving.

Sayles appeared in supporting roles in films such as Dangerous Girlfriend , Malcolm X , Matinee - The Horror Premiere , Gridlock'd and Girlfight - On Your Own .

In 1983 he was a MacArthur Fellow . In 2005 he was elected to the American Academy of Arts and Sciences .