Maurice Papon at the presentation of the Concorde (1967)

During the Second World War he was a senior official of the Vichy regime . During the German occupation of France he collaborated and was responsible for organizing the deportations of Jews in the context of the Holocaust . After the war he continued his career as a high official, including in French Algeria. From 1958 to 1966 he was prefect of police in Paris. In this position he was primarily responsible for the Paris massacre of Algerian demonstrators in October 1961.

From 1968 to 1981 he was a member of the French National Assembly and from 1978 to 1981 budget minister. He was awarded three degrees of the Legion of Honor, most recently since 1978 Commander . In 1998 he was sentenced to ten years in prison for his crimes under National Socialism , of which he served three years.

In Papon's birthplace Gretz-Armainvilliers, his father, lawyer and supporter of the secular-bourgeois party radical , was mayor for a long time. At times, Maurice Papon grew up near Reims when his father was running a glass factory there. He attended the Lycée Montaigne and the Lycée Louis-le-Grand in Paris , studied after graduating from high school in 1929 at the Sorbonne and graduated in 1932 with a license in law. Until 1935, he also acquired degrees in administrative law, economic policy, sociology and psychology, partly as a part-time job. He also graduated from the École libre des sciences politiques (Sciences Po).

In 1931 he began his career in the ministerial bureaucracy and joined the cabinet ministériel of the aviation minister . Politically, he also joined the Parti radical. After his military service in 1932/1933 as a reserve officer in the infantry, he came into the administration of the Interior Ministry in 1935. He became the chief of staff to the deputy director in the community affairs department. In 1936, during the Popular Front government , he became an employee of François de Tessan . When François de Tessan was appointed Undersecretary of State for Foreign Affairs in the government of Camille Chautemps , he chose Papon as his parliamentary attaché. In 1939 Papon was mobilized and sent to Tripoli and later to Syria .

After the defeat of France, Papon returned to France in November 1940 and served the Vichy regime.

Papon was transferred to the Central Administration of the Interior Ministry as deputy head of the office before being appointed vice prefect, 1st class in 1941 . In May 1942, his superior Maurice Sabatier was appointed Regional Prefect of Aquitaine by Prime Minister Pierre Laval . Papon was appointed Secretary General of the Gironde Prefecture , responsible for Jewish affairs. In the region around Bordeaux , which belonged to the German-occupied part of France , Maurice Papon was inspector of the service for Jewish questions (exact name: Secretary General of the prefecture, responsible for police, finances, health and youth, bridge and road construction, economy, transport and Care). The term transport also included the deportations of Jews to the Drancy collection camp . From 1942, he ensured, among other things, that the trains to the camp were always as full as possible in order to utilize the transport capacity. For this purpose, sanatoriums and old people's homes were combed through on his orders. 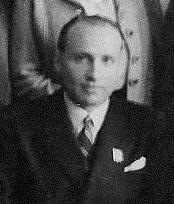 Maurice Papon in the prefecture of Bordeaux April 27, 1945

At the end of the Second World War, Papon was able to produce a letter identifying him as a member of the resistance movement, dated October 25, 1944 and signed by "Colonel Ollivier", the founder of the local resistance network . However, the authenticity of this document has repeatedly been questioned and is still controversial today.

Papon successfully hid his past as a Nazi collaborator, was confirmed in office by Charles de Gaulle and quickly made a career in the civil service, as Prefect of Corsica (1947–1949), Prefect of the Constantine Province in Algeria (1949–1951), Secretary General of the Police Prefecture of Paris (1951–1954), General Secretary of the Protectorate of Morocco (1954–1956) and again Prefect of the Algerian Province of Constantine at the time of the Algerian War (1956–1958).

In April 1958, General de Gaulle appointed Papon Prefect of Police of Paris . In July 1961 he received the Legion of Honor from de Gaulle .

In that year France was in the final stages of the Algerian War . On October 17, 1961, the Algerian liberation movement FLN organized a demonstration after several police officers had been killed in FLN attacks. The tragic events surrounding that demonstration would go down in history as the 1961 Paris massacre .

In the run-up to the demonstration, Papon had declared: "We will answer every blow with ten counter-blows". The government gave him authority to restore calm to the streets of Paris. The police opened fire on the demonstrating crowd. The events that followed were never fully resolved. It was not until the 1980s that there was a reappraisal and public debate. While the police admitted only three dead at the time, independent sources speak of at least 40 dead, for example Jean-Paul Brunet . Le Monde and Alain-Gérard Slama as well as Linda Amiri , who researched the archives of the police prefecture of Paris, assume at least 100 dead; the historian Jean-Luc Einaudi estimates the number of deaths at 200 to 300. 357 injured Algerians were treated in the hospitals in Paris.

In a demonstration by the trade unions and the Communist Party against the OAS on February 8, 1962, police action again resulted in eight deaths. Some of the demonstrators were beaten to death by police officers. As the crowd in panic in front of the policemen in the entrance of the metro station Charonne fled, were there in the crowd more people crushed ( massacre in the metro station Charonne ).

As police prefect, Papon was responsible for these dead, as Jean-Luc Einaudi pointed out, among others. Others, including Pierre Messmer in the later trial against Papon (see below), added that then Prime Minister Michel Debré and General de Gaulle were also to blame for giving Papon a free hand and covering his back.

In January 1967, Papon resigned from his post as prefect of the police. He became president of Sud-Aviation , one of the forerunners of today's EADS , which developed the Concorde supersonic aircraft together with the British Aircraft Corporation .

The close cohesion of the French elites meant that Papon was able to continue his exemplary career as a high official despite his crimes. Jacques Foccart cites the following conversation in his diary for October 11, 1968:

From 1968 to 1971 Papon was treasurer of the Gaullist party Union des démocrates pour la République (UDR). In the parliamentary elections in 1968 he was elected to the National Assembly as a member of the Cher Département . He was re-elected twice, so that he was a member of parliament until 1981. He was also mayor of the small town of Saint-Amand-Montrond in the Cher department from 1971 to 1983 .

During Valéry Giscard d'Estaing's presidency , Papon became budget minister in the liberal-conservative government of Raymond Barres on April 3, 1978 . He also served as a contact for the Argentine military dictatorship . Only after the presidential election in France in 1981 and the rise of the left-wing government under François Mitterrand did Papon's political career come to an end, and in the same year the first trial against him was opened in Bordeaux for his role in the deportations of Jews from 1942 to 1944. But there were more to come 16 years before Papon had to answer for it in court.

Trial for crimes against humanity

Little by little, Papon's responsibility for the Holocaust was exposed. His trial began on October 8, 1997 after a long legal battle. He was found guilty of complicity in crimes against humanity on April 2, 1998, and was sentenced to ten years in prison and for loss of civil rights .

The process was the longest in French history . It had different meanings for the French: for some it was the last opportunity to come to terms with the history of the collaboration in court. Papon's arrogance, contempt for the court, and his refusal to apologize or show remorse were loathed by many. The question of a person's responsibility in a chain of responsibilities was controversial. The prosecutors requested a 20-year prison sentence.

Papon was found guilty of ordering the arrest and deportation of 1,560 Jews , including children and the elderly, between 1942 and 1944 . Most of these people were deported to Auschwitz .

In 1999 Papon went to prison. In 2002 it was terminated because of his health, which aroused severe criticism. The release was made possible by the Kouchner Act (loi Kouchner) passed on March 4, 2002 , named after Bernard Kouchner . After that, prison inmates can be released if they suffer from life-threatening illnesses or if their health would be compromised by imprisonment. Papon was the second inmate to benefit from this law.

After his release from prison, Papon lived four more years in his birthplace, the Paris suburb of Gretz-Armainvilliers. On February 8, 2007, he was admitted to a clinic east of Paris with heart problems, where he died on February 17 at the age of 96. Der Spiegel wrote in the obituary about Papon: "He was the epitome of the French civil servant, highly cultured, brilliant and, if necessary, without any scruples."

The Paris Tribunal de Grande Instance (TGI) decided in October 2004 that the cable television broadcaster Histoire could broadcast essential parts of the video recordings from the Papon trial, a total of 80 hours. The court of appeal (Cour d'appel) upheld the decision. The broadcast took place in February and March 2005. The material was also published on the Internet. In February 2007, the full length recordings of the trial were made available on the Institut national de l'audiovisuel (INA) website.