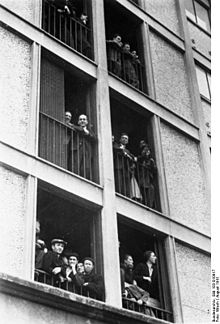 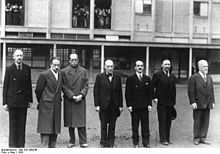 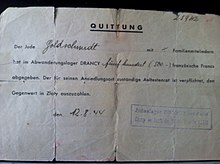 The Drancy collection and transit camp was temporarily a notorious prison camp in the city of Drancy 20 kilometers northeast of Paris and gained notoriety as the place of the Shoah in France , from where around 65,000 mainly French Jews took the train to the German extermination camps, most of them today Poles ( Auschwitz-Birkenau and others) were transported. Around 63,000 of them were murdered in these or previously died from the catastrophic circumstances of transport, housing and treatment. There were around 6,000 children among them. Only 1,467 survivors were liberated by a Swedish envoy and representative of the Red Cross together with the Allied forces on August 18, 1944. Nine out of ten deported French Jews were deported to the east via Drancy. Initially under French leadership, SS-Hauptsturmführer Alois Brunner took command of the camp on July 2, 1943, assisted by four SS officers. The French staff were laid off. They used prisoners as camp police ( "Membres du Service d'Ordre" ). The remaining large French assembly camps for Jews were in Compiègne (Royallieu) ( Oise department ), Pithiviers (Loiret) and Beaune-la-Rolande (Loiret).

The building complex of the Cité de la Muette was built according to plans by the architects Marcel Lods and Eugène Beaudouin between 1932 and 1934 and was one of the first large-scale housing complexes built in France as part of social housing in the interwar period . The public housing complex became a police barracks with an internment camp for militant communists in October 1939 . After the German occupation of France in May and June 1940, the building complex was confiscated by the German Wehrmacht ; first French prisoners of war , later captured Yugoslav and Greek civilians were imprisoned here. In October 1941 the area was converted into the most important detention camp for Jews, but also for members of other ethnic or social minorities. 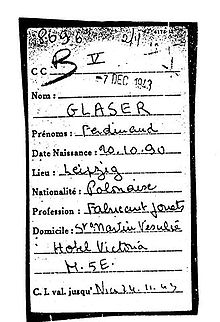 Registration form in the Drancy transit camp. The prisoner Ferdinand Glaser arrived on November 24, 1943 and was deported to Auschwitz on December 7, 1943.

Like other prisons in France was the transit camp Drancy on the orders of the occupying power under the auspices of the Higher SS and Police Leader in France, later SD , been decorated and had the control of the SS to July 1942 hauptsturmführer Theodor Dannecker until June 1943 SS-Obersturmführer Heinz Röthke and from July 3, 1943 under SS-Hauptsturmführer Alois Brunner . It was chosen because of its proximity to the large marshalling yard. The camp opened after a manhunt against Parisian Jews in August 1941 when 4,000 people were arrested. Further waves of arrests against Jews were carried out by the French police on the decision of the Vichy regime by Marshal Philippe Pétain from 1941 to 1944 not only in the occupied zone, but also in the “unoccupied” southern zone. These were also directed against the Jews who fled from Germany and Austria to the south of France, who were in internment camps on their visas , their ship passage or their departure to a country without persecution (mostly the United States or Mexico , Cuba , China or on the transit visa for Spain or Portugal ) waited.

The camp in Drancy was a four-story U-shaped building complex around a 400 m long, 40 m wide inner courtyard, which was originally designed for 700 people, but in which more than 7,000 people were imprisoned at its peak. The horseshoe-shaped camp was surrounded by barbed wire and watchtowers at all four corners and was guarded by French gendarmes . Documentary evidence and testimony have proven the inhumane conditions and brutality of the French guards at Drancy, which included separating young children from their parents immediately upon arrival.

Klaus Barbie , the notorious “butcher of Lyon ”, kidnapped all Jewish children, whom he could get hold of during searches of French children's homes , to Drancy, from where they were all taken to Auschwitz to be murdered (see also: Children of Izieu ).

In November 1941, around 800 interned patients under the age of 18 had been released. In December 1941, 40 Drancy prisoners were executed in retaliation for a French attack on a German police officer. The military commander in France , Otto von Stülpnagel , received repeated demands from the Wehrmacht High Command in Berlin to shoot hostages in retaliation for attacks by the Resistance on German soldiers and police officers. Thereupon, at the end of 1941, Stülpnagel demanded the deportation of "larger masses of Jews and Communists to the East" because "it has a much more deterrent effect on the French population than the mass shootings that they did not understand".

In the same month Major Walter Bargatzky , a lawyer who belonged to the commandant's office of the German military administration in the Hotel Majestic , received for the first time a detailed eyewitness report on the mass killings north of Kiev in Babi Yar . This description quickly circulated on the German staff. Initially, the view was still expressed that the mass killings may have occurred on local occasions and at local locations. When, however, after the Wannsee Conference, Reinhard Heydrich gave an exclusive lecture to the upper echelons of the Hotel Majestic on May 7, 1942, in which he spoke of attempts to kill Jews by specially prepared trucks whose exhaust gases were supposed to kill the deportees, and in this context that When the word " gassing " was used for the first time, there was no longer any doubt about the fate of the Jews of Drancy. On this occasion, Heydrich introduced the new police and SS leader in Paris, Carl Oberg , who, unlike his predecessors, was no longer dependent on the administrative assistance of the military commander of the French authorities, but was given direct powers of deportation . He was notorious for his harassing behavior, be it by banning music, playing cards or dancing or by refusing aid packages from relatives and aid organizations to the camp inmates. After the raid in the Vélodrome d'Hiver , during which over 13,000 Jews were arrested on July 16 and 17, 1942, married couples and unmarried children without children were initially taken to Drancy.

Since Allied air raids took place on Paris marshalling yards, through which the deportation trains rolled day and night, it happened that sealed wagons burst open as a result of the bombing and prisoners fled. In order to be able to differentiate them more quickly from others, those responsible came up with the perfidious idea of ​​only transporting Jews naked. For this reason, these transports were given the designation "nude transports". Bargatzky that the German resistance by 20 July 1944 belonged and was destined for success of the assassination of prosecution against those responsible for the occupation crimes had collected these details to make it the basis for a charge of " undermining military strength to make" against the SD leader.

According to Serge Klarsfeld's research , 42 convoys with 40,450 deportees left Drancy via Bourget-Drancy station between March 27, 1942 and June 23, 1943. 21 convoys with 22,450 deportees were transported to their deaths via Bobigny station in the north. 58 of these transports reached Auschwitz-Birkenau , two death trains each went to Majdanek and Sobibor and one to Kaunas and Reval . Until July 1943 the trains were accompanied by SS guards and French gendarmes. Then the police came from Germany.

Many French Jewish intellectuals and artists were imprisoned in Drancy, including Max Jacob (who died in the camp in 1944), the philosopher Tristan Bernard and the choreographer René Blum .

A prominent detainee was Fania Fénelon , a singer from Paris. Her father Jules Goldblum was Jewish. She was caught supporting communist actions, arrested by the Gestapo and sent to the Drancy transit camp. From there she was sent on to Auschwitz, where she was a member of the Auschwitz Girls' Orchestra directed by Alma Rosé . She survived the concentration camp and the death march and was liberated by the British. Alma Rosé was also interned in this camp for six months until her deportation on July 18, 1943. Luise Straus-Ernst , a respected cultural journalist in Germany during the Weimar Republic and the first wife of the surrealist Max Ernst , was discovered in her hiding place in southern France, arrested and interned in Drancy. On June 30, 1944, she was deported to Auschwitz on the penultimate train.

In the course of the liberation of Paris on August 18, 1944, after the arrival of the Swedish consul Raoul Nordling , who prevented the city from being destroyed, and members of the Red Cross, 1,467 prisoners were liberated. 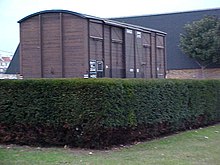 The witness wagon in La Muette as evidence of the deportation

In 1976 the sculptor Shlomo Selinger created the memorial of the deportation, which is located in the La Muette district, in memory of the French Jews imprisoned here. Part of the monument is the witness wagon ( Wagon-Témoin ) opened in 1988 . As originally planned, there are social housing in the camp buildings.

On January 20, 2005, arsonists set fire to some cattle wagons in the former assembly center. A leaflet signed “ Bin Laden ” with an inverted swastika was found on site.