Michael Keller (born February 16, 1896 in Siegen , † November 7, 1961 in Münster , Westphalia ) was a German Catholic theologian and from 1947 to 1961 Bishop of Münster . He campaigned for the spread of Catholic social teaching and promoted the lay movement .

Michael Keller was born as the son of the later Reich judge Josef Keller . His father was transferred to the IV Civil Senate of the Imperial Court in Leipzig in 1910 as an assistant judge and from 1912 as a judge . Michael Keller attended the humanistic Thomas School in Leipzig and graduated from high school there in 1914. He then began studying Catholic theology at the Paderborn Theological Faculty . With the outbreak of the First World War he volunteered for military service and last served as a reserve lieutenant . He was awarded the Iron Cross 1st and 2nd Class, the Albrechts Order (Knight's Cross 2nd Class) and the General Medal of Honor in Silver with Swords.

After the war he continued his theological studies at the Canisianum in Innsbruck . In 1921 he was ordained as a deacon in Feldkirch and on November 6, 1921 , he was ordained priest in the St. Georgenberg-Fiecht Abbey near Schwaz ; he was incardinated in the clergy of the Osnabrück diocese . He then studied in Rome and was at the University of Innsbruck for Doctor of theology doctorate . During his time in Innsbruck he was an active member of the Catholic student association K.St.V. Rhenania Innsbruck , organized in KV and ÖKV .

From 1924 he was chaplain of the St. Elisabeth parish in Hamburg-Harvestehude for ten years . From 1931 to 1933 he was pastor (regional name for pastor ) of the Maria Grün church in Hamburg-Blankenese. In 1934 he became diocesan chairman and in 1935 prosynodal judge of the German Catechist Association . From 1935 to 1939 he was spiritual at the Osnabrück seminary . In 1939 he became Regens and thus head of the seminary . In 1943 he was appointed cathedral capitular of the Osnabrück diocese .

On July 19, 1947 he was by Pope Pius XII. appointed bishop as successor to Cardinal Clemens August von Galen , who died on March 22, 1946 . He was ordained bishop on October 28, 1947, by the Archbishop of Cologne, Josef Cardinal Frings, in the Heilig-Geist-Kirche in Münster, since it was not destroyed by bombs in the Second World War .

Bishop Michael Keller died of a heart attack the night after his 40th anniversary as a priest. On November 11, 1961, he was buried in the west choir of St. Paulus Cathedral in Münster. Cardinal Frings celebrated the funeral service. 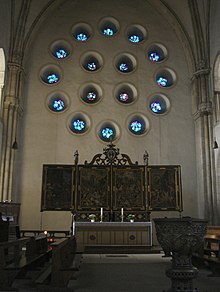 Keller was a bishop who cared heavily about pastoral care. He recognized early on the importance of the lay movement Catholic Action and dealt with Catholic social teaching. He particularly supported the Catholic Workers 'Movement (KAB), the Christian Workers' Youth (CAJ), the Association of Catholics in Business and Administration (KKV), the Catholic rural people movement (KLB) and the Kolping Society . He cultivated a strict piety to Mary. At a KAB rally in Rheinhausen before the federal election in 1957 , he declared that a Catholic could not vote for the SPD , among other things because this party did not follow natural law on important points .

In pastoral letters he drew attention to the Christian educational mandate of the parents. He promoted the priestly profession and was involved in the rebuilding of the Collegium Borromaeum Münster , the Collegium Ludgerianum , the Collegium Johanneum , the Collegium Augustinianum Gaesdonck , the St. Pius College Coesfeld and the Catholic Academy Franz-Wärme-Haus . Under his aegis, the parishes with more than 10,000 believers were restructured. More than 100 new churches were built.

Keller was the first German bishop who - together with Julius Angerhausen - visited the Catholic missions in Africa. At the invitation of the Benedictine Father Thomas Ohm , he traveled through East and South Africa. He consistently rejected the apartheid policy in South Africa. 1958 awarded him the Holy See the award throne assistant to His Holiness .

During Keller's tenure, the reconstruction of St. Paulus Cathedral , which had been badly damaged in World War II, took place. Against the resistance of the population and the preservation of monuments, Keller succeeded in not restoring the architecturally significant westwork with the main portal, but replacing it with simple windows arranged in a circle. Since then, the cathedral can only be entered through a side entrance. The windows initiated by Keller are still popularly referred to today as "cellar windows", "God's dial" or "soul shower".