The title of this article is ambiguous. For the Prussian district administrator, see Joseph Frings (politician) .

Josef Richard Frings was born in Neuss in 1887 as the second of eight children to the weaving mill manufacturer Heinrich Frings and his wife Maria, née Sels. He passed his Abitur in 1905 at the Royal High School (today Quirinus High School ) in Neuss and studied Catholic theology in Munich , Innsbruck , Freiburg im Breisgau and Bonn . In Freiburg he became active in the KV with the Catholic student association Bavaria . In Bonn he belonged to the St. VkTh theological association. Rhenofrankonia Bonn.

Josef Frings received the sacrament of ordination to the priesthood on August 10, 1910 in Cologne through Auxiliary Bishop Joseph Müller . He initially worked as a chaplain in Cologne-Zollstock until 1913 . This was followed by a study visit to Rome until 1915. In Rome he lived in the priestly college of Santa Maria dell'Anima . In 1916 he received his doctorate in theology in Freiburg . From 1915 to 1922 he was pastor of the Catholic parish of St. Marien in Cologne-Fühlingen , from 1922 to 1924 head of an orphanage in Neuss and from 1924 to 1937 pastor of St. Joseph in Cologne-Braunsfeld . Then he was from 1937 to 1942 rain of the archbishop's seminary in Bensberg .

As a pastor in Braunsfeld, he came into contact with the then mayor of Cologne, Konrad Adenauer , because Adenauer, without belonging to Frings' Braunsfeld parish, attended Sunday services in St. Joseph with his family. Pastor Frings had brought two of the family's younger children to first communion. In Adenauer's opinion, Frings had wrong ideas about raising children. Until the time when Adenauer was Chancellor and Frings Cardinal, the relationship between the two remained extremely cool.

Bad Honnef, Spießgasse 9, towards the end of the Second World War, the home of Joseph Frings

The office of Archbishop of Cologne, to which he was unexpectedly appointed on May 1, 1942, was held by Josef Frings from 1942 to 1969. The Apostolic Nuncio in Germany, Archbishop Cesare Orsenigo , was ordained bishop on June 21, 1942 in Cologne Cathedral . Co-consecrators were the Cologne auxiliary bishops Wilhelm Stockum and Joseph Hammels . His coat of arms was: Pro hominibus constitutus ( Latin : “Ordered for the people”). The National Socialist regime had forbidden the press in Germany to report on the ordination of the new Archbishop of Cologne; so the Cologne Catholics made do by posting private classified ads. The international press was represented at the consecration celebrations in Cologne Cathedral, so that outside of Germany there were reports about the consecration in some places. The persecution of Jews called Frings publicly as a "blatant injustice", his popularity saved him from reprisals. However, with the help of a number of informants , at least some of whom were clerics , he was kept under constant surveillance by the Gestapo .

On February 18, 1946 he was together with Konrad Graf von Preysing and Clemens August Graf von Galen by Pope Pius XII. accepted into the college of cardinals . In his function as cardinal priest he was assigned the titular church of San Giovanni a Porta Latina .

From 1945 to 1965 he was chairman of the Fulda Bishops 'Conference, the predecessor institution of the German Bishops' Conference . In 1948 he was taken over by Pius XII. appointed High Protector for Refugees . In 1958 he was the initiator and co-founder of the Misereor aid organization . The aid organization's magazine is named after him: frings. The Adveniat aid organization also went back to his public suggestion in 1961. In his universal church initiatives, he proceeded self-confidently without first obtaining approval from the Roman Curia . In his address to the Fulda Bishops' Conference on the foundation of Misereor in 1958, he answered the question “What does Rome say about this?”: “But we cannot get Rome's blessing before every initiative. That means moving on with responsibility. "

Frings resigned his bishopric in February 1969 for reasons of age, as his eyesight deteriorated more and more. Joseph Höffner , the previous Bishop of Münster , was placed at his side as Coadjutor Archbishop as early as January . He succeeded him as Archbishop of Cologne on February 24, 1969. In 1977 Cardinal Frings was the longest serving cardinal priest and cardinal proto-priest . Frings died on December 17, 1978 at the age of 91. He was buried in the archbishop's crypt in Cologne Cathedral.

Frings entered the German language with the verb “fringsen” for “commit mouth robbery” . The term goes back to his New Year's Eve sermon held on December 31, 1946 in the Church of St. Engelbert in Cologne-Riehl , in which he stated with reference to the looting of coal trains and the poor supply situation:

"We live in times when, in times of need, the individual will also be allowed to take what he needs to maintain his life and health, if he cannot obtain it in any other way, through his work or by asking."

After that, in Cologne and later throughout Germany, the procurement of food and heating materials for acute personal needs by simply stealing, suppressing or embezzling them was called “fringsen” (spoken with a voiced “s”) (see also: Kohlenklau # Lasting popularity ). The next sentences of the sermon

“But I believe that in many cases it has gone way beyond that. And there is only one way: to return unjust goods immediately, otherwise there will be no forgiveness from God. "

were often not noticed. During the ceremonial renaming of the Düsseldorf South Bridge over the Rhine (see below), a benefit campaign was offered to “fringing backwards” by buying special briquettes for the benefit of those in need.

When the Dachau trials , in connection with the Malmedy trial, were increasingly accused of “victorious justice” by the churches and other groups, the US military governor Lucius D. Clay thought a letter to the cardinal, chairman of the Fulda Bishops' Conference, was necessary, because Frings had also made a name for himself as an advocate for war criminals. In it, Clay defended the " War Crimes Program " and stressed that the war crimes tribunals were "set up in the hope that the world would recognize their contribution to peace and that they would serve as a deterrent for future attackers".

As a bishop, Cardinal Josef Frings was one of the participants in the Second Vatican Council and was a member of the ten-person council presidium. His speech on the rules of procedure, given freely in Latin at the opening session of the council (the first “General Congregation”), with which he called for a time to get to know the council fathers before the decision on the composition of the council commissions, prevented the council from being carried out after the Curia developed rules of procedure. His - largely by Joseph Ratzinger , the associated therewith Council theologians and future Pope Benedict XVI, wrote -. Critical discourse on the Holy Office under the direction of Cardinal Alfredo Ottaviani had a significant impact, and ultimately led to the fundamental restructuring of the Authority Congregation for the Doctrine of the Faith .

In a letter dated May 18, 1967, he asked Pope Paul VI. a post-conciliar authoritative decision on the question of birth control and thus gave an impetus or contribution to the encyclical Humanae vitae .

During the deliberations on the Basic Law , Frings joined the CDU in November 1948 through a letter to Konrad Adenauer , but declared his resignation in May 1949. Assumptions that this was connected with the fact that the Basic Law did not take into account the church interests from Frings' point of view, he rejected and justified the step with the fact that the Reich Concordat forbade Catholic clergy from membership in political parties. With this step he signaled that the German Center Party can no longer consider itself a party of Catholics.

In 1952, Federal President Theodor Heuss awarded Frings the Grand Cross of the Order of Merit of the Federal Republic of Germany . On May 11, 1957, the Sophia University in Tokyo awarded him the title of honorary doctor of philosophy on the occasion of the inauguration of the church-sponsored law faculty of this university, which is financially supported by the Archdiocese of Cologne.

Frings is the only Archbishop of Cologne to whom the city of Cologne has granted honorary citizenship. That happened in 1967, in the same year he was also made an honorary citizen of his hometown Neuss and in 1946 that of the town of Honnef (today Bad Honnef), where he had resided several times during the war years from 1941 to 1945.

He became an honorary philistine of the K.St.V. Arminia Bonn and the K.St.V. Rhenania Innsbruck in the KV and on May 3, 1967 honorary member of the AV Rheinstein Cologne in the CV .

Sculpture by Josef Frings in Cologne, by Kurt Arentz, 1998

On the initiative of the Josef Cardinal Frings Society in 2005, the southern bridge between Düsseldorf and Neuss was renamed the Joseph Cardinal Frings Bridge in honor of the native Neusser . Frings monuments can be found in Cologne's old town on Laurenzplatz and in Neuss near the Quirinus Minster .

In 1969, Frings gave one of his bishop's staffs, which he received as a gift from Neuss parishioners on the occasion of his ordination and which the artist Hildegard Domizlaff had made, to his confidante and secretary Hubert Luthe on the occasion of his ordination as auxiliary bishop in Cologne . Since he bequeathed it to Cologne Cathedral in his will , it was handed over to Cologne in 2014 and is in the cathedral treasury just like the second, simpler and lighter gold-plated rod made of silver and ivory created by Domizlaff in 1964.

The historical archive of the Archdiocese of Cologne keeps the estate of Cardinal Frings.

The great popularity of the cardinal, who always speaks in the Rhenish dialect , was reflected in numerous anecdotes. 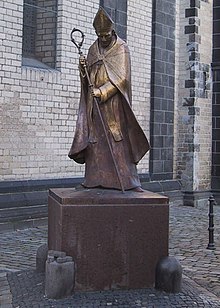 The Frings memorial in Neuss by Elmar Hillebrand (inaugurated in 2000)

In 1996, the “Josef Cardinal Frings Gesellschaft zu Neuss am Rhein e. V. “founded. It is non-profit and registered with the registry court. The aim of the society is to scientifically research the life and work of Cardinal Frings and to make them known to a broad public.

On August 12, 2000, the monument erected by the Cardinal Frings Society was consecrated by Elmar Hillebrand by Joachim Cardinal Meisner. On December 17th, 2008, six floor slabs were added, which graphically report on the most important stages in the life of Cardinal Frings. The bronze reliefs were created by the artist Michael Franke .

List of Archbishops and Bishops of Cologne (since 1801)
(Predecessor: Maximilian Franz of Austria )

Chairwoman of the Würzburg, Fulda and German Bishops' Conferences