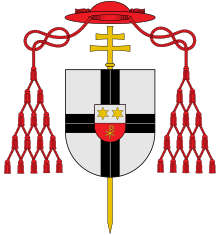 Karl Joseph Schulte was born as the son of a Krupp officer in Haus Valbert (near Oedingen , at that time the district of Meschede in the Sauerland ). He finished school with the Abitur at the Royal High School on Burgplatz in Essen . He studied Catholic theology at the University of Bonn , the Theological and Philosophical Academy in Münster and at the Theological Academy Paderborn . After he was released from the theologian convict in Bonn due to a visit to a pub, he was ordained a priest on March 22, 1895 in Paderborn . He then worked as vicar and religion teacher for six years in the Ruhr community in Witten .

From 1901 he was employed as a repetitee in the Paderborn Theologenkonvikt Leoninum and from 1903 in the seminary there. At the beginning of March of the same year he did his doctorate with Paul von Schanz at the University of Tübingen with a thesis on Theodoret von Cyrus for Dr. theol. In 1905 he followed a call as professor for apologetics and canon law at the academy in Paderborn. As a professor he was since 1909 co-editor of the journal Theologie und Glaube, founded by the Paderborn theologians in the same year .

On November 30, 1909, he was unanimously elected Bishop of Paderborn by the Paderborn Cathedral Chapter and received the episcopal ordination by Antonius Cardinal Fischer on March 19, 1910 . On April 12, 1910 he was also introduced as Apostolic Administrator of the Apostolic Vicariate Anhalt . In union dispute Schulte was among the supporters of denominational cross Christian unions and already turned in before the war against the intransigent position adopted by the 1914 deceased Breslauer Cardinal Georg Kopp . In the First World War he initiated a prisoner of war aid that made him known beyond the diocese's borders. In addition to caring for prisoners, the main task was to provide information about missing soldiers.

In the bishop's election in the Cologne cathedral chapter after the death of Cologne Cardinal Felix von Hartmann in 1919, Schulte prevailed against the second foreign candidate, Bishop Adolf Bertram von Breslau. Karl Joseph Schulte, the favorite of the cathedral chapter, Prussia and Rome, was elected Archbishop of Cologne on January 15, 1920 and enthroned on March 25 . A year later, on March 7, 1921, Pope Benedict XV created it . the Cardinal with the titular church of Santi Quattro Coronati . Schulte was a participant in the conclave in 1922 and 1939 . On November 30, 1924 he was able to consecrate the largest free-swinging bell in the world for the Cologne Cathedral, the Petersglocke .

As in Paderborn, the Archbishop was primarily concerned with improving academic and spiritual training for priests. He also took care of the reform and modernization of the diocesan administration. In 1925 he decided to reorganize the deaneries within the archbishopric. In 1929, after three years of construction, the new Cologne seminary was inaugurated in the then still independent community of Bensberg , which today houses a conference center named after Cardinal Schulte.

In 1930 the diocese of Aachen was re-established as the suffragan diocese of the archbishopric of Cologne and the previous Vicar General Joseph Vogt from Cologne was introduced by Schulte as the new bishop of Aachen. Schultes was carried out on the initiative of 1931, the canonization of Albertus Magnus . On December 16, 1931 founded the Schulte Albertus Magnus Institute in Bonn for a critical edition of the works of Doctor of the Church . Schulte also opened the process of beatification of Adolph Kolping .

In March 1931, the bishops of Cologne's ecclesiastical province warned against the false doctrines of National Socialism, which were not compatible with the teachings of the Catholic Church.

In the era of National Socialism Schulte took within the 1935 split into supporters and opponents of open opposing against government excesses of and crimes course German episcopate a little profiled position and followed largely the very cautious entering politics of his from Paderborn hours trusted friend and Breslauer colleagues Cardinal Bertram , the chairman of the Fulda Bishops' Conference . In February 1934 Schulte met Adolf Hitler and insisted on compliance with the provisions of the Concordat. In March of the same year he had a "defense against anti-Christian propaganda" set up in the Archdiocese of Cologne, which was supposed to protect the church milieu from Nazi influence; he appointed the Cologne chaplain Joseph Teusch as director , whom he appointed vicar of the cathedral . In addition to numerous brochures dealing with the doctrine of National Socialism from a Catholic perspective, the Abwehrstelle mainly distributed the truths of the catechism and the anonymously published critical studies on the myth of the 20th century that reached Christians throughout the German Empire. The fact that Cardinal Schulte initially withdrew his consent to the publication of the studies in Cologne, so that the first publication by Bishop Clemens August Graf von Galen in the Diocese of Münster, illustrates the different attitudes of the two pastors with regard to the ecclesiastical behavior towards the National Socialist regime.

Different views of pastoral care were also evident in the struggle for the denominational school , which was not an insignificant topic in the Catholic stronghold of Cologne. In pastoral speeches and other pronouncements, Schulte protested against the closure of the denominational schools ordered by the Nazi authorities in contradiction to the agreements of the Reich Concordat , and even had them voted on in church services throughout the diocese. All of these activities were ineffective. However, Schulte did not change his legalistic course and, despite obvious unsuccessfulness, continued to act as if the concordat partner basically adhered to the law. The resulting extremely defensive course in church politics was often criticized, especially after the end of the Third Reich.

Seriously ill with heart for years, Schulte died of acute heart failure on the night of March 11, 1941 after a serious air raid on Cologne. He was buried on March 17th in Cologne Cathedral , the funeral address was given by Bishop Bornewasser von Trier.

Karl Joseph Schulte was on 22 March 1920 after his appointment as archbishop of Cologne , the honorary citizenship of the city of Paderborn awarded.

Archbishops of Cologne (since 1801)
(Predecessor: Maximilian Franz of Austria )