This article deals with the clergyman Stefan Heße. For other people see Stefan Hesse . 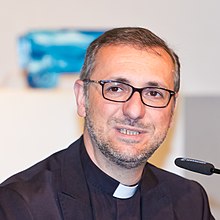 Stefan Heße (born August 7, 1966 in Cologne ) is a Roman Catholic clergyman and archbishop of Hamburg . In the course of the Cologne abuse report and the breaches of duty shown by the then Vicar General Heße, he offered the Pope his resignation on March 18, 2021; however, the Pope did not accept this resignation.

Diocesan administrator Stefan Heße at the pontifical office for the inauguration of the Archbishop of Cologne, Cardinal Rainer Maria Woelki (2014)

Heße grew up in Cologne-Junkersdorf as the son of an independent family of bakers . After graduating from high school in Cologne Kreuzgasse , he began studying philosophy and theology in Bonn and Regensburg in 1986 . On June 18, 1993, he received the Cologne Cathedral , the ordination by the Cologne Archbishop Joachim Cardinal Meisner , together with the later bishops Peter Kohlgraf and Dominic Schwaderlapp and the later Cologne Cathedral Dean Robert Small .

Activities in the Archdiocese of Cologne

From 1993 to 1997 Heße was chaplain in St. Remigius in Bergheim. From 1997 to 2003 he worked as a repetitionist in the Archbishop's Theologian Convict in Bonn, which at that time was headed by today's Archbishop Rainer Maria Woelki of Cologne . In 2001 he received his doctorate in theology with a dissertation on Hans Urs von Balthasar at the Philosophical-Theological University of Vallendar . From 2003 to 2005 he headed the pastoral work / pastoral services department in the General Vicariate of the Archdiocese of Cologne and was also diocesan commissioner for radio and television until 2012. 2005 he was given by Pope Benedict XVI. the honorary title of chaplain to His Holiness ; 2010 the title of Papal Honorary Prelate .

On May 1, 2006, he became deputy general vicar Dominikus Schwaderlapp , and in the same year also head of the pastoral care staff of the archdiocese. On September 11, 2011, Stefan Heße was appointed to the Cologne Metropolitan Chapter as resident cathedral chapter .

On March 16, 2012, Heße replaced Dominikus Schwaderlapp as vicar general after he had been appointed as the new auxiliary bishop in Cologne. When the Sedis vacancy occurred on February 28, 2014, due to the acceptance of Joachim Cardinal Meisner's resignation by Pope Francis , his office as Vicar General expired automatically. On the same day the Cologne chose him Domkapitel the diocesan administrator of the Archdiocese of Cologne.

At the inauguration of the new Archbishop of Cologne, Rainer Maria Cardinal Woelki, on September 20, 2014, the Cardinal reaffirmed him as Vicar General. 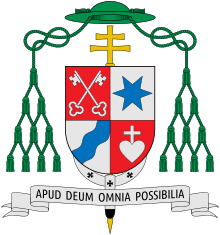 Pope Francis appointed him Archbishop of Hamburg on January 26, 2015. He is the third archbishop since the new establishment of the diocese in 1994. Rainer Maria Cardinal Woelki appointed Dominik Meiering as his successor as Vicar General in Cologne on February 2, 2015 with effect from February 22 . The episcopal ordination and inauguration as Archbishop of Hamburg took place on March 14, 2015 by the Osnabrück Bishop Franz-Josef Bode . Co- consecrators were the Archbishop of Cologne, Rainer Maria Cardinal Woelki, and Norbert Werbs , Auxiliary Bishop in Hamburg.

With the inauguration as Archbishop of Hamburg, Heße resigned from the Cologne Cathedral Chapter and the clergy of the Archdiocese of Cologne. Cardinal Woelki also appointed him Dome of Honor of Cologne .

In the Archdiocese of Hamburg, Heße is continuing the dissolution of several parishes initiated by his predecessor Werner Thissen . The number of parishes is to decrease from 83 to 28. Heße justified this with the decreasing number of parish priests.

On March 18, 2021, in the course of the publication of the abuse report of the Archdiocese of Cologne , Heße asked Pope Francis to be relieved of his duties immediately. He thus drew conclusions from his actions as HR manager and vicar general in Cologne and took responsibility for the breaches of duty that he was accused of. Heße regretted if he had caused further suffering to those affected and their families through his actions or omissions. The Pope initially granted Heße a break, as the Archdiocese announced on March 29, 2021. The Archdiocese of Hamburg was provisionally headed by Vicar General Ansgar Thim .

On September 15, 2021, the Apostolic Nunciature announced that Pope Francis had not accepted Hesse's resignation. During a visit to Cologne in June 2021, Hesse's work was also examined; Although Hesses' “personal procedural errors” were found, it had been shown that although he had shown a lack of “attention and sensitivity to those affected by abuse”, the procedural errors were not committed with the intention of accusing cases of sexual abuse cover up. Archbishop Heße has since resumed his official duties.

Stefan Heße was a deputy member of the Broadcasting Council of West German Broadcasting from January 8, 2007 until his appointment as Archbishop of Hamburg .

Archbishop Heße has been the spiritual assistant to the Central Committee of German Catholics (ZdK) since November 18, 2016, succeeding Bishop Gebhard Fürst .

In 2017, Heße was invested in Vienna as a Knight of Honor of the Teutonic Order .

Stefan Heße sees media work and Web 2.0 as special tasks for the church of the future. The church needs to improve its language skills so that others can understand the faith. “How do I prevent, for example, Easter from being reduced to a rabbit festival?” Says Heße. He believes that it is necessary that the church be transparent and responsible with its finances and that the figures for its assets are disclosed. Heße is also very interested in the dialogue with the faithful and advocates faster decisions on questions of church ethics . In August 2015, Heße called for the liberalization of Catholic sexual ethics . The church must appreciate it when values ​​such as loyalty and reliability are lived in homosexual relationships. In August 2019, Heße and Bishop Franz-Josef Bode spoke out in favor of a more open treatment of their church with homosexuals.

On the other hand, Heße viewed the Bundestag decision on “ marriage for all ” on June 30, 2017, critically. He "regretted" that the church and state understanding of marriage "became further apart".

In August 2020, Heße declared that the debate in the Catholic Church on the admission of women to the ordination office had not yet ended and called for an open discussion about female deacons and priests .

Dealing with sexual violence against children in Cologne

In October 2020, the Frankfurter Allgemeine Zeitung , citing the image , reported that Heße, in his role as head of the human resources department in Cologne , had "withdrawn a priest, who is said to have abused his three nieces ," from both ecclesiastical and, indirectly, secular prosecution. Despite a confession, the clergyman was reinstated in pastoral care. Heße denied to the Bildzeitung that he was involved in the cover-up of the case and ruled out "having agreed to a procedure in which in cases of sexual abuse of the content of the conversation no protocols should be kept or even protocols, files or conversation notes destroyed in case of doubt." ". In a subsequent statement, the Archdiocese of Cologne announced that there were no indications of a confession from the available notes from a hearing of the suspected pastor in the Vicariate General. The state investigation that had been opened against the suspect was discontinued in March 2011 after “those affected had exercised their right to refuse to testify”.

Matthias Katsch from the initiative “Eckiger Tisch” suggested that Heße resign. "For me, Archbishop Stefan Heße can no longer perform his office credibly - neither in dealing with those affected nor with a view to reappraising. I think that sooner or later he will have to resign. ”The Münster theologian and canon lawyer Thomas Schüller agreed with this assessment :“ In 2010, Heße would have been legally obliged to initiate a preliminary investigation and to inform the Vatican. If the allegations are confirmed, Heße is no longer tenable as Hamburg's archbishop. ”In November 2020 it became known that Heße temporarily no longer wanted to exercise his office as clergyman assistant to the Central Committee of German Catholics (ZdK) due to the allegations . In this context, there is increasing pressure on the Archbishop of Cologne, Woelki , to make an opinion that was withheld by him available to the public, in which Heße would be critically assessed. A special report by the Munich law firm Westpfahl Spilker und Wastl, which reveals the deficiencies in the Archdiocese's handling of a case, has been publicly available on the pages of the Kölner Stadtanzeiger since November 24, 2020 .

In addition, it became known that “Woelki had already [confronted] Heße and other former responsible persons in the Archdiocese of Cologne in spring 2019 that they had behaved 'illegally in several respects'”.

Heße turned to the Vatican Congregation for the Bishops and asked for an examination of the allegations and possible effects on his office as archbishop, since he could "not be a judge on his own behalf", as announced on November 20, 2020 by the Archdiocese of Hamburg.

The abuse report published on March 18, 2021 and the investigation by the Gercke / Wollschläger law firm into dealing with sexualised violence in the Archdiocese of Cologne show that Heße, as HR officer, vicar general and diocesan administrator, is charged with eleven breaches of duty in connection with the processing of There are allegations of abuse in the Archdiocese of Cologne, based on nine cases. Heße is said to have failed to initiate church proceedings to clarify allegations of abuse and failed to report several cases to the public prosecutor or the Vatican. During Hesse's term of office, a large number of abuse reports were made in 2010, and due to numerous legal changes in connection with the handling of suspected abuse cases, the legal situation was unclear, according to the experts; In addition, Heße had received insufficient advice from the official and legal advisor of the Archdiocese of Cologne.