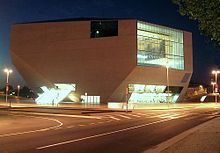 Casa da Música in Porto (Portugal) shortly after opening in 2005

Nederlands Dans Theater in The Hague (1987)

Rem Koolhaas (born November 17, 1944 in Rotterdam ) is a Dutch architect and a renowned representative of contemporary architecture .

Koolhaas spent part of his childhood in Indonesia . After returning to the Netherlands at the end of the 1960s, he initially worked as a journalist for the weekly magazine Haagse Post , which experimented with new forms of journalism during this politically and culturally very turbulent period. For the Haagse Post , he interviewed the artist Constant , who had a decisive influence on Koolhaas with his utopian architectural project New Babylon . He also worked for a short time as a screenwriter .

Between 1968 and 1972 Koolhaas studied architecture at the Architectural Association School of Architecture (AA) in London. He then worked in the USA for the German architect Oswald Mathias Ungers at Cornell University in Ithaca, who was a professor there.

Together with Madelon Vriesendorp , Elia Zenghelis and Zoe Zenghelis , he founded the office for Metropolitan Architecture (OMA) in 1975 . With the publication of several architectural theoretical papers, the holding of readings and participation in commissions, the OMA has played an important role in the global architecture discussion since its foundation.

In December 2007 he became a member of the Council of Wise Men on the Future of Europe . In January 2013, Koolhaas was appointed curator of the 14th Venice Architecture Biennale (June 7th to November 23rd, 2014). Together with Wolfgang Tillmans and Stephan Petermann , in spring 2018 he called on artists and creative people in the EU to take part in an advertising campaign for the 2019 European elections . At a four-day Eurolab with workshops and interviews in Amsterdam, ideas were to be developed on how to strengthen and rekindle the citizens' enthusiasm for Europe.

Rem Koolhaas is a professor at Harvard University . He is married to the Dutch artist Madelon Vriesendorp and they have two children. He is the grandson of Dirk Roosenburg , also an architect.

One of his most influential books is Delirious New York: A Retroactive Manifesto of Manhattan , published in 1978, in which he attempts to portray the implicit urban philosophy of Manhattan . In this book, he interprets Manhattan as the typical example of the big city, the character of which manifests itself primarily in the “culture of congestion”. According to this interpretation, the density of the big city and its confusing inner contradictions in aesthetic, social and cultural terms make up its charm and quality. Many buildings and designs by Koolhaas are shaped by this understanding of the city. A typical feature of his buildings is their collage-like and labyrinthine conception. They combine different aesthetics and functions or collide. Koolhaas is interested in the function of the building as a “social catalyst”, i.e. the conscious and often provocative influence of architecture on social behavior.

It was not until the early 1980s that the first structures based on his designs were realized. The IJ-plein was built in the north of Amsterdam . Koolhaas was responsible for the master plan as well as the construction of some residential buildings, the community center and the school. Between 1980 and 1987, the venue for the Nederlands Dans Theater was built in The Hague . His other projects under OMA are there explained.

In 1995 the manifesto S, M, L, XL appeared in collaboration with the graphic designer Bruce Mau .

Rotterdam - XL architecture. Rotterdam , whose center was destroyed in World War II, is now a modern city with many high-rise buildings, many of which are surrounded by large stretches of water from the Rhine delta. After Rem Koolhaas had published the book “S, M, L, XL” in 1995, he designed the largest building in the Netherlands in terms of construction volume for Rotterdam in 1998. This building, known as the “Vertical City”, was completed in 2013 and contains many urban functions in the form of offices, conference rooms, hotels, restaurants, gyms, apartments, etc. The mega-building has 44 floors, is 149 m high and roughly the same width. It appears as a large wall slab of three closely connected towers. Today's urban development in Rotterdam is generally seen as successful.

The Hague - Generic City. In the historic city of The Hague , the generic city principle became topical in a different way. Koolhaas did not realize a mega-building here, only supplied the theoretical concept for the city center. The municipality of The Hague - thanks to the authority of Koolhaas - has adopted a much-used quote from him as a program for the city center. The city architect Maarten Schmitt, who worked in The Hague from 1998 to 2009, formulated this basic concept as follows: “Before building the new townhouse in The Hague, Rem Koolhaas described the Spui quarter (in the city center) as a unique area, which - as a kind of village - is filled with gigantic building blocks, on a scale that has seldom seen in the Netherlands. ”Later the city architect wrote:“ The 'end of the historic city' announced in the publication 'Generic City' seems to be to be perfectly tailored for a city like The Hague. ”- In 2012, the concentration of buildings proposed by Koolhaas in the historic city center of The Hague was carried out. - The reactions of the city dwellers were different. Compared to other cities such as Amsterdam , Paris , Bern , Munich or Venice , whose historical centers have remained “Generic City-free”, the question arose as to what is preferable: “Preserve the historical city” or “End the historical city” ? "(See biography" The Hague - Maarten Schmitt "and article Traditionalism .)

Star architect Rem Koolhaas in the Netherlands. Based on the book “S, M, L, XL”, mega-projects have been created by various architects in the middle of historic cities in recent years. Koolhaas' conception of architecture was supported by the government, including state awards. Newspapers and magazines often write about him as a star architect and his authority seems inviolable. - Today, however, there is a certain resistance from the population to the large mega-projects in the historic cities. In the first half of 2014, the following fully developed mega-projects were rejected in connection with the municipal parliament elections: "Artplex" Utrecht , "ArtA" Arnhem and "Spuiforum" The Hague (250 million project). Another mega-project in The Hague, the "M-gebouw" (300 million project) designed by Koolhaas, failed in 2010 after construction activities had already started. - It is striking that the criticized mega-projects are seldom associated with Rem Koolhaas' world of ideas, although they were announced in 1995 with the slogan “S, M, L, XL”. - Although he made a significant contribution to international architecture, the question can be asked whether his “feeling” is sufficient for the value of the historic city in Europe. - The latest catchphrase from Koolhaas is "Absorbing Modernity", which he formulated for the 2014 Venice Architecture Biennale . This makes the comparison between “total modernity” and “historic city” relevant again. Perhaps a solution should be found for the existence of both cultural phenomena.

Architectural development in the Netherlands in the 21st century. The architect Rem Koolhaas is characterized on a popular website (top010.nl) as follows: "Rem Koolhaas is without a doubt the most influential and internationally best-known Dutch architect today." - While the Netherlands made significant contributions to several international architectural trends in the 20th century , Rem Koolhaas continues this tradition in the 21st century. His ideas of the “Generic City” and “XL architecture” are expressed in many Dutch cities today. It is important to name other and sometimes less well-known people who supported his conception of architecture. In addition to many architects, journalists and architecture journalists, the above-mentioned official Maarten Schmitt should be mentioned, who as a supporter of Koolhaas (and Habraken ) was long-time president of the architecture department of the national “Council for Culture” (Raad voor Cultuur) and his opinion of the government could convey. Various published government standpoints can be traced back to Schmitt's advice. Since spring 2014, Maarten Schmitt's former superior - the former city councilor Marnix Norder of The Hague - has been the highest government official of the participation movement. - In summary, it can be said that the architectural development of the Netherlands in the 21st century - in terms of progressive viewpoints - was strongly influenced by Rem Koolhaas as the most famous architect and theorist, John Habraken as the theoretician of the participation movement and the officials Maarten Schmitt and Marnix Norder as influential Government advisor.

(only awards explicitly for Rem Koolhaas, for awards in the context of OMA see there )