The title of this article is ambiguous. Further meanings are listed under Schmiede (disambiguation) . 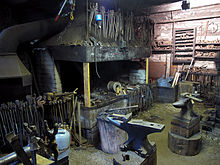 As forging refers to the workshop of a blacksmith in the malleable metals are changed by cold or warm deformation in shape, microstructure and surface.

The classic artisanal blacksmith's shop, which used to be found in almost every village, has now almost completely disappeared. If the village did not have its own blacksmith's shop (in Angerdörfern preferably on the village green next to the village pond, because of the risk of fire), blacksmithing was done by traveling blacksmiths, a kind of forerunner of field blacksmiths. The most important item of equipment was the Esse in which the glowing forge coal (Esskohle, a high-quality coal ) for heating the workpiece by means of a bellows at maximum temperatures of about 1250  ° C was brought. In some newer blacksmiths the forge is also operated with coke . Above the fireplace is the chimney , which serves as an outlet for smoke and sparks.

Numerous tools are available in the forge to shape the workpiece . T. were made by the blacksmith himself. The anvil plays a central role here. Other tools are:

Changes in properties (structure, hardness, toughness) in workpieces made of steel are carried out after forging in oil , less often in water, by quenching in the hardening basin provided for this purpose and then tempering . Here, the so-called tempering colors are visible on previously polished areas , which an experienced blacksmith uses to estimate the tempering temperature. This can be an indication of the hardness and toughness achieved.

The workpiece surface can be finished with finishing hammers or designed with structured dies .

The artisanal blacksmith's shop today often serves as an art forge for metal design , as a knife and tool forge or as a farrier's shop . In its function it resembles the former village blacksmith, which in most cases had a wide range of work from farrier to wagon blacksmith / wheelwright. Today, the forge is often a propane-powered fire with volcanic stone or ceramic chips as heat storage. On the other hand, there are still blacksmiths who work in the conventional way with air blowers and forged coal, because the operation of a gas stove is more expensive.

In food operated with forged coal, just as in gas food, there may be a slight carburization of the workpiece when heated to high temperatures. This is definitely desirable for certain types of work with steel, but workpieces made of iron can be more susceptible to corrosion.

The hammer guide is still clearly recognizable in many medieval ironwork . The material for such work was then not steel , but relatively pure iron ( soft iron ) produced in a racing furnace ( Luppe ) or from puddle iron from the end of the 18th century . For this purpose, the finished work was burned in by the blacksmith on his forge with linseed oil , whereby a certain protection against corrosion could be achieved. In addition, rust protection paints with slightly toxic red lead were used, some of which were superior to today's protective paints in terms of long-term effects.

The term “puddling” describes the process of manually “stirring out” carbon and slag from the incandescent, liquid iron in the furnace, which becomes increasingly doughy as it cools, by bringing air into the melt. As a result of the manual process, no completely homogeneous material is created, but rather the puddle iron still contains slag, which can later show up in the processing of a stringiness and linearity of the material.

A mechanically operated forging hammer , such as an air hammer or spring hammer, reduces the amount of physical forging work. Classic hand forging techniques such as fire welding (the only possible welding process until the end of the 19th century), splitting or perforating the workpiece are now often carried out with electrical devices such as welding equipment or punching - but still apply in relation to the design of the workpiece or its strength Commitment.

The mobile form of the forge is the field forge . It is a small forge on a wheeled or portable base, a small anvil and a few selected tools. The term comes from the time when blacksmiths were still used on the battlefield to repair weapons and equipment, often in connection with wagons and draft animals. The field forge is now mostly replaced by a mobile, gas-heated blacksmith's forge, for example at equestrian events when the presence of a farrier is mandatory. 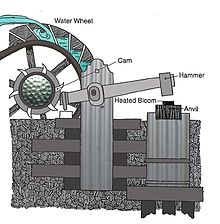 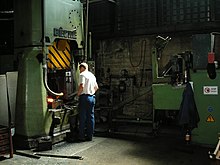 In a large industrial forge or drop forge , the workpieces are heated in large furnaces , today mostly inductively or with gas firing, and formed with hydraulically or pneumatically driven hammers or with mechanical or hydraulic presses . In the case of very large workpieces, the workpieces can be transported in the forging hall using cranes , usually on conveyor belts.

The forerunners of industrial forging at the beginning of industrialization were the hammer mills ( iron hammer or copper hammer ), which, located on watercourses, used water power to drive drop hammers .

In open die forging , large pieces are usually processed by reshaping the workpiece in several heating steps (“from several heats”), because a single heating is not sufficient for the complete change in shape. The forgings are then tempered , for example , that is, subjected to a heat treatment in order to achieve the desired mechanical properties in terms of hardness , strength and toughness .

The legend Pythagoras in the smithy tells how the ancient Greek philosopher Pythagoras of Samos is said to have found the theoretical basis of music while visiting a smithy with the help of the different pitches of the forge hammers.