The district of Spree-Neisse ( Lower Sorbian Wokrejs Sprjewja-Nysa ) is a district in the southeast of Brandenburg .

After completing the municipal reform in 2004 and the dissolution of Haidemühl , the district comprised 30 municipalities from January 1, 2006, including seven cities. According to the official determination in 2016, 20 municipalities and two further districts of otherwise German-speaking cities or municipalities were officially bilingual ( German , Lower Sorbian ).

See also : List of places in the district of Spree-Neisse  and Sorbian settlement area

The district of Spree-Neisse was created on December 6, 1993 in the course of the district reform in Brandenburg from the former districts of Cottbus , Guben , Forst and Spremberg . The district of Guben was incorporated into this district against his will (see also the Oder-Spree district ).

As part of the municipal reform in 2003 , the district had to cede the municipalities of Gallinchen , Groß Gaglow and Kiekebusch (previously the Neuhausen / Spree district ) to the city of Cottbus against its declared will . According to the will of the state government, the remaining municipalities of this office were to be merged into the non-official municipality of Neuhausen / Spree . Due to formal errors, this merger did not take effect until September 19, 2004.

Due to the municipal reform of October 26, 2003, the district lost about 5300 inhabitants to Cottbus.

Since the election on May 26, 2019, the 50 seats in the district council have been distributed among parties and groups of voters as follows:

Altekrüger lost to his competitor Dieter Friese (SPD) in the district council election on January 24, 2010, who received 51.3% of the valid votes. However, due to the low turnout of 26.4%, Friese missed the required quorum of 15% of eligible voters. As a result, the district council had to decide. He elected Altekrüger on April 19, 2010 in accordance with Section 72 (3) of the Brandenburg Local Election Act for a term of office of eight years as District Administrator.

Altekrüger was confirmed in office for a further term of eight years in the district council election on May 6, 2018 with 60.8% of the valid votes.

The district administrator is a voting member of the district council.

The Spree-Neisse district has a coat of arms, a flag and an official seal. The interior minister of the state of Brandenburg approved the coat of arms on September 6, 1995, the flag in 1997.

Description of coat of arms
“Quartered; above in front in silver an upright red crab, behind in red a soaring, double-tailed, crowned silver lion; below in front a three-leaved golden crown in blue, behind in gold an upright, outwardly bent red deer pole with four ends and a clover-leaf-shaped rose. "

Flag description
"Square of red and white, with the circular coat of arms in the middle."

The Spree-Neisse district maintains partnerships with the following districts:

The Spree-Neisse district has maintained partnerships with districts in other countries since 1998. The main purpose of the partnerships is to give the citizens of the district through diverse projects and personal encounters with the partner regions the opportunity to get to know and understand other cultures, to break down borders between peoples and in this way to promote a tolerant togetherness.

In the state of Brandenburg, the Spree-Neisse district is one of the industrial conurbations. The economic structure is traditionally shaped by the lignite and energy industries. But the plastics and chemical industry, the food industry, metalworking and the paper, construction and building materials industries are also present as future-oriented sectors. Significant industrial and commercial areas are located in the cities of Spremberg (regional growth core), Forst (Lausitz), Guben and Welzow.

The Spree-Neisse district had a gross domestic product of € 30,723 per inhabitant in 2016.

The Spremberg business location is one of 15 regional growth centers in the state of Brandenburg. This promotes selected future-oriented industries.

The A 15 motorway crosses the district in a west-east direction. 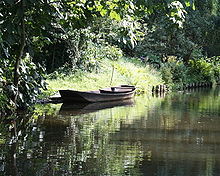 Boat in the Spreewald

There are 22 designated nature reserves in the district (as of February 2017).

See also : List of nature reserves in the Spree-Neisse district

On January 1, 1994, the district was assigned the distinctive sign SPN and has been issued ever since.

As part of the license plate liberalization , the distinctive characters FOR (Forst), GUB (Guben) and SPB (Spremberg) have been available since March 19, 2013 , which reflect the license plates of the three old districts between 1990 and 1993.