Groß Schacksdorf is located in Niederlausitz , about six kilometers south of the city center of Forst (Lausitz) and six kilometers from the border with Poland. The district borders in the north on Forst with Domsdorf , in the east on Groß Bademeusel , in the south on Preschen , in the south-west on Jocksdorf and in the west on Simmersdorf. The inhabited part of the municipality Waldsiedlung belongs to the district of Simmersdorf . There are several ponds in the south and east of the Groß Schacksdorf district.

Groß Schacksdorf is on the district road 7109 from Simmersdorf to Forst. The federal highway 115 is two kilometers west of the village. The federal motorway 15 runs through the north-eastern part of the district of Groß Schacksdorf, and the nearest junction, Forst, is four kilometers away. The former Preschen military airfield is located south of the forest settlement . 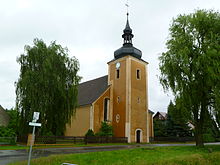 Groß Schacksdorf was first documented in 1346 in the Meißner diocese articles as "Czechsdorff". The place name is derived from the Sorbian first name “Czech”. The addition of “large” served to distinguish it from Strzeszowice , which is now in Poland and whose German place name is “Tzschacksdorf”. United Schacksdorf was originally a vassal village of domination forestry and thus belonged to Gubenischen circle . During the Thirty Years War , the village church of Groß Schacksdorf , which was built in the 14th century, was destroyed. Between 1719 and 1721 it was rebuilt on the foundations of the old church. After the Peace of Prague , Groß Schacksdorf came to the Electorate of Saxony in 1635 .

The manor house in Groß Schacksdorf was built in the 18th century as a two-story plastered building with a hipped roof . Opposite the manor there is a robber baron gate with three trophies, which are copies of the originals of the gate from the manor in Klinge .

In 1806 the Electorate of Saxony was elevated to a kingdom . After the division of the Kingdom of Saxony decided at the Congress of Vienna , Groß Schacksdorf came to the Kingdom of Prussia and belonged to the administrative district of Frankfurt in the province of Brandenburg . During the administrative reform of 1816, the municipality was assigned to the Sorau district . Around 1840 Groß Schacksdorf had 495 inhabitants in 76 buildings. The place also includes a colony, a farm , a brickyard , two windmills and a remote cottage. The brickworks was located in the north of the district at today's Graben 18 . In 1864 Groß Schacksdorf had 559 inhabitants. In the census of December 1, 1871, there were 485 inhabitants in 105 families and a single household in the rural community of Groß Schacksdorf. Of the population, 236 were male and 249 female; 106 inhabitants were children under ten years of age. The manor district "Gut Groß Tzschacksdorf" had 86 inhabitants at that time, of which 44 were men and 42 women and 15 children under ten years of age.

From 1874 Groß Schacksdorf belonged to the district of Simmersdorf. According to Arnošt Muka, 50 of the 548 inhabitants were Sorbs in 1884/85 , which corresponds to a share of nine percent. Between 1903 and 1905 a village school was set up in Groß Schacksdorf. At the census on December 1, 1910, the rural community Groß Schacksdorf had 478 and the manor district 35 inhabitants. The manor district was dissolved in 1928 and incorporated into the rural community. Until October 18, 1937, the official spelling of the place name was Groß Tzschacksdorf , which was changed by the National Socialists in order to blur the Sorbian origin of the place name. During the Second World War , the village church was badly damaged. After the end of the war, Groß Schacksdorf remained in the Sorau district, which initially existed in the Soviet occupation zone . After its dissolution on April 1, 1946, Groß Schacksdorf was reclassified to the Cottbus district . From 1947 the Cottbus district belonged to the state of Brandenburg . Since 1949 the place was in the GDR. During the administrative reform on July 25, 1952, the states in the GDR were dissolved and the districts restructured. Groß Schacksdorf was assigned to the Forst district in the Cottbus district .

Territorial status of the respective year, from 1964 with the forest settlement