The Havelland district [ ˈhaːfl̩ˌlant ] is a district in the west of Brandenburg .

Map of the Havelland district

The Havelland district covers most of the Havelland . In the east it has a share in the natural area of the Zehdenick-Spandauer Havelniederung .

Neighboring districts are the Ostprignitz-Ruppin district in the north and the Oberhavel district in the northeast . The eastern border forms the border with the Berlin district of Spandau . In the southeast the district borders on the regional capital Potsdam , in the south on the district Potsdam-Mittelmark and the independent city Brandenburg an der Havel . On the border in the west are the Saxony-Anhalt districts of Stendal and Jerichower Land .

Since the municipal reform in 2003, the district has comprised 26 municipalities, including seven cities.

See also : List of places in the Havelland district 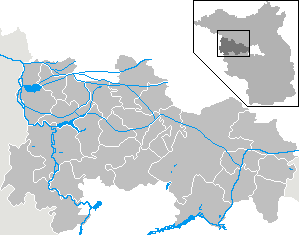 The castle stables of several former Slavic castle walls such as the Bamme castle wall or the Hohennauen-Witzke castle wall have been preserved from the time of the early medieval Slavic settlement . The historical Havelland landscape was the tribal area of ​​the Slavic Hevellers . The central castle town was Brandenburg an der Havel . The tribal area of ​​the Heveller came into their possession in 1150/1157 due to an inheritance contract between the Heveller prince Pribislaw-Heinrich and Albrecht the Bear and was the ancestral land of the Mark Brandenburg founded by Albrecht the Bear . Early German evidence in Havelland is the castle stables of Burg Landin on the Teufelsberg.

The Havelland district was established on December 6, 1993 as part of the Brandenburg district reform by amalgamating the former Nauen (NAU) and Rathenow (RN) districts. The district offices of the Westhavelland and Osthavelland districts formed in the Kingdom of Prussia and existed until 1952 were also located here . The demarcation was based on the principle of forming sectoral circles .

Since the election on May 26, 2019, the 56 seats in the district council have been distributed among parties and groups of voters as follows:

Lewandowski received 53.2% of the valid votes in the district election on April 24, 2016. However, due to the low turnout of 28.7%, he missed the required quorum of 15% of eligible voters. As a result, the district council had to decide. On June 20, 2016, he elected Lewandowski as district administrator for a term of eight years in accordance with Section 72 (3) of the Brandenburg Local Election Act.

There are district associations of CDU, SPD, FDP, Bündnis 90 / Die Grünen , the Left , the AfD , the Pirate Party , the PARTY and the Family Party .

The Havelland district council decided in its 14th meeting on February 20, 1995 to use the coat of arms described below, designed by the graphic artist Ruth Peschel. Approval by the Brandenburg Ministry of the Interior took place on August 31, 1995.

Description of coat of arms
“Divided from blue to silver by a wave cut; at the top two gold-billed silver swans flying to the right, at the bottom a gold-armored red eagle head, accompanied on both sides by a six-pointed blue star. "

In its 20th meeting on September 25, 1995, the Havelland district council decided to fly the flag described below and to obtain approval for this from the Ministry of the Interior.

Flag description
The flag of the Havelland district is striped lengthways in the colors blue: white: blue (1: 2: 1) and bears the coat of arms upright in the median.
Official seal

In the Future Atlas 2016 , the Havelland district was ranked 367 out of 402 districts and independent cities in Germany, making it one of the regions with "high future risks".

Regional train in Wustermark station, on the left the tracks of the ICE line Hanover-Berlin . Seen from the bridge on Bundesstrasse 5

The Berlin-Lehrter Bahn (with the ICE route Hanover-Berlin ) and the Berlin-Hamburg Bahn run centrally through the district in an east-west direction . Long-distance trains cross the district without stopping. In regional traffic , the regional express lines RE2 and RE4 operated by ODEG are particularly important. At the Hamburg train from Berlin run coming up Nauen additional DB - regional trains , another regional train connection exists u. a. from Wustermark to Potsdam .

There are 26 designated nature reserves in the district (as of February 2017).

See also : List of nature reserves in the Havelland district

On January 1, 1994, the district was assigned the HVL license plate and has been issued ever since. Since January 4, 2016, the symbols NAU (Nauen) and RN (Rathenow) , which were replaced in 1993, have been available again.