Ribbeck is a district of the city of Nauen in the Havelland district in Brandenburg .

Ribbeck lies at an altitude of 35 m above sea level. NHN about nine kilometers northwest of Nauen on the federal highway 5 between Nauen and Pessin . The place has an area of ​​20.55 km² and 383 inhabitants (as of December 31, 2002) . This corresponds to a population density of 19 inhabitants per square kilometer. The Beetzseerinne , formed during the Ice Age, begins to the east of Ribbeck and extends south-east to Brandenburg an der Havel .

The village of Ribbeck was first named in the land register of Emperor Charles IV in 1375 in connection with the von Ribbeck family and their manors. Henricus de Ritbeke was mentioned as early as August 4, 1237 when the cathedral chapter of Brandenburg an der Havel confirmed a donation from Bishop Gernand . In 1282 Johann von Ribbeck was mentioned in a document. In 1354 the von Bredow became feudal lords for a generation in Ribbeck. As early as 1374 the von Ribbeck were enfeoffed with the village again and were the owners of the estate until 1945. In addition to the Ribbeckschen Gut, there was another estate in Ribbeck between 1706 and 1828, the von Bardeleben family's estate . In 1856 the village fell victim to a fire, except for the manor house, the church and two farms.

The Fideikommissherr on Ribbeck and Bagow Hans Georg Karl Anton von Ribbeck (* July 5, 1880, † April 1945) was the last squire from the house of Ribbeck in the village of Ribbeck. In 1944 he was arrested as an avowed and staunch monarchist and anti-Nazi opponent, taken to the Sachsenhausen concentration camp and murdered there in April 1945. In 1994 a memorial stone was placed in the family cemetery to commemorate him.
From September 20, 1901 to April 1, 1961, Ribbeck was a stop on the Rathenow-Senzke-Nauen district railway .

New pear tree next to the church

On October 26th, 2003 Ribbeck was incorporated into Nauen.

Ribbeck was best known through the poem Herr von Ribbeck auf Ribbeck im Havelland by Theodor Fontane , which reminds of Hans Georg von Ribbeck (1689–1759). The pear tree described in the poem on Ribbeck's grave was knocked over in a storm on February 20, 1911. Its original stump is now in the village church. A new pear tree was planted southwest of the village church in 2000.

With the broadcast of the ARD , the crime thriller Pfarrer Braun - Heiliger Birnbaum with Ottfried Fischer in the leading role, the story of Ribbeck and his pear tree was made known again. The episode was broadcast on April 10, 2008 in the first and played in Ribbeck, where it was partially shot in 2007. 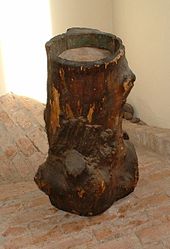 Trunk of the old pear tree

The village church, built in the Middle Ages, was extensively redesigned in 1722. However, it did not get its current shape until the nave was lengthened at the end of the 19th century. The addition of an apse and the furnishings date from the same period. In 1996 the tower helmet was restored with the participation of the German Foundation for Monument Protection . Inside the church, a plaque commemorates Hans Georg Carl Friedrich Ernst von Ribbeck (* April 22, 1799, † December 31, 1882). Inside is the trunk of the old pear tree and under the church is the crypt of those of Ribbeck.

Built in 1893 as the family seat of the von Ribbeck family, it was expropriated in 1947 and used as a nursing home from 1956 to 2004. After extensive renovation, the house, which is now owned by the Havelland district, was reopened in July 2009 as a lighthouse project for cultural tourism. It houses, among other things, a museum, event rooms and a restaurant. 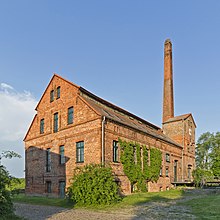 Distillery in the manor

Districts of the city of Nauen