Schönwalde-Glien is a municipality in the Havelland district in the state of Brandenburg . The seat of the municipal administration is in the Schönwalde-Siedlung district .

The community is mostly located north of the Havel Canal , northwest of the Spandau Forest ( Berlin-Spandau ) and ten kilometers northeast of Nauen . The largest district of Schönwalde-Siedlung lies south of the Havel Canal and borders directly on Berlin-Spandau. The municipality of Schönwalde-Glien is part of the regional park Krämer Forst . The community is located on the southwestern edge of the Ländchen Glien ground moraine plate at the transition to the Zehdenick-Spandauer Havel lowlands . In the north it borders on the southern foothills of the Krämerwald.

The community Schönwalde-Glien consists of the districts (with population as of December 31, 2017)

There is also the Saubucht residential area .

Grünefeld was first mentioned in documents in 1379, Paaren im Glien in 1412, Pausin in 1324, Perwenitz in 1421, Schönwalde-Dorf in 1437 and Wansdorf in 1313. The district of Schönwalde settlement emerged from 1900. The districts emerged as street green villages . Sometimes they took over names of Slavic origin such as Glien ( glina = clay ), Pausin ( place at the height ) and Perwenitz (after the locator Perw ) or received German names such as Grünefeld, Schönwalde and Wansdorf (after the locator Wan).

The current village was under the municipal reform in Brandenburg from the communities of the October 26, 2003 Office Schönwalde-Glien (Schönwalde, couples in the ganglia, Pausin, Perwenitz, Wansdorf) and the community Grünefeld that from the former Office Nauen country changed , educated.

Territory of the respective year, number of inhabitants: as of December 31, from 2011 based on the 2011 census

The community council Schönwalde-Glien consists of 18 members and the full-time mayor with the following distribution of seats:

In the mayoral election on September 1, 2019, Oehme was elected for a further eight-year term with 57.7 percent of the votes cast.

Blazon : "Split by gold and blue, in front a green ash leaf with seven leaflets, behind two piles of falling silver swans."

Reason: The shield division is based on the design of the seal of the former community Schönwalde, which has been proven since 1946 at the latest and was apparently inspired by the coat of arms of the Osthavelland district created in 1935 . Both the coat of arms of Osthavelland and the seal of Schönwalde showed two swans falling in stakes in the split shield in the rear field. The swans embody the tradition in which the community Schönwalde-Glien stands and refer to their territorial affiliation. The blue of the rear field indicates the location of the municipality in the water-rich Luch. The gold in the front field refers to the ground moraine plate Ländchen Glien, whose name comes from Elbe Slavonic and means “clay”. It thus speaks for the second member of the community name, "Glien". The green ash leaf with the seven leaflets symbolizes the community of the seven districts in the municipality. Ash trees, together with other tree species from floodplain, swamp and lowland forests, form rich stands in the Havelländisches Luch, which was historically also known as the Gliener Luch and which occupies the largest part of the community. Ash trees are also popular avenue trees that line several sections of the connecting roads between the districts. The paper also speaks for the first member of the community name, "Schönwalde".

The coat of arms was designed by Christian Gering from Schönwalde-Dorf. In a public survey in February 2004, 43% of the participating citizens of the municipality decided in favor of the draft, which was unanimously approved by the municipal council in its meeting on March 18, 2004.

The Ministry of the Interior of Brandenburg approved the coat of arms on October 29, 2004.

The coat of arms of Grünefeld was designed by the marketing expert and heraldist Frank Diemar from Erfurt, the coats of arms of the other places by the landscape planner and former member of the Schönwalde municipal council, Christian Gering. The coat of arms of Schönwalde was recreated in 1994 on the basis of seal images from the 1940s. The drawing of the swans comes from the graphic artist Lutz Lüders from Schönwalde-Siedlung, who died in 2004.

The flag of the municipality of Schönwalde-Glien shows: A two-striped banner, divided in the upper third, yellow-blue above, covered with the heraldic figures, green-white below. 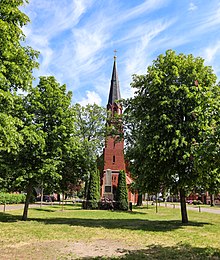 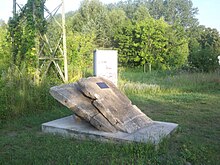 Wall monument on the border with Berlin-Spandau

In the community there is the 135 meter high Perwenitz television tower , a telecommunications tower belonging to Deutsche Telekom AG. It was built from 1956 to 1959 and is the tallest building in the Havelland district.

Other attractions in the municipality are:

A memorial for the victims of fascism in Schönwalde-Siedlung stood in front of the Kulturhaus on Berliner Allee and the corner of Amselsteig. It was dismantled in 1996 and stored with the plan to re-erect it.

Schönwalde-Glien is located on the L 16 state road between the Börnicke district of Nauen and the Berlin state border ( Spandau district ). The A 10 motorway (western Berlin Ring) runs through the west of the municipality and can be reached from Schönwalde-Glien via the Falkensee junction .

Schönwalde station (Kr. Nauen) on the Berlin outer ring was opened in 1953 and closed in 1996.

The Havelland cycle path, which starts at the border with Berlin-Spandau, runs through the community.

The Schönwalde airfield from the time of National Socialism , used by the group of the Soviet armed forces in Germany until 1992 , has been closed; now there is an industrial park.

Cities and municipalities in the Havelland district