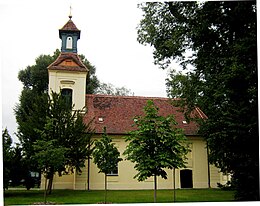 The village church in Schönwalde is the parish church of the Protestant parish in Schönwalde-Glien in the Havelland district ( Falkensee parish ). It is in the Schönwald district of Dorf .

The single- aisled church was in 1737 was built in succession an older, had fallen into disrepair church in the Baroque style of brick masonry and plastered and church inspector (= November 10, 1737 Superintendent ) George Lamprecht inaugurated . In 1735 the Prussian officer Otto Rollaz von Rosey (or du Rosay) (1703–1760) acquired the Schönwalde estate and the church patronage and also started building the new church; after the death of his wife Dorothea on November 2, 1746, he withdrew from Schönwalde. The owners of the church changed several times in the following years.

The nave, which is covered with a gable roof , ends on three sides in the east. To the west is the not aisle-wide ("drawn in") square tower, which is crowned by a wooden lantern with a tent roof ; the weather vane on top shows the year 1737 and a small golden sun.

Inside, the church has an open wooden horseshoe gallery along the back wall and the two side walls, dating from the time the church was built; on the west wall the gallery is curved.

In 1934/35 the church was extensively renovated, the interior was given a new painting by the church painter Robert Sandfort . The west tower was completely renovated in 1996. The roof and outer skin of the nave were renewed in 1999–2000; the baroque structure of the outer facade was restored.

The church has been a listed building since 1985 . It is one of the few church buildings from the reign of the Prussian King Friedrich Wilhelm I is obtained. 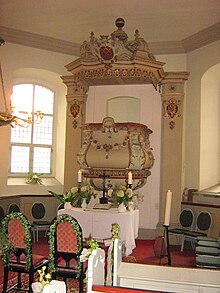 The wooden, colored pulpit altar belongs to the original furnishings of the church. It has a curved pulpit, decorated with rose garlands, and is flanked by column profiles on which gilded monograms refer to the donors of the church, altar and organ: Otto (or Colonel?) Von Rosey ("OvR", left) and Dorothea von Rosey ("DvR", right). Rosey's coat of arms can be seen on the front of the pulpit's sound cover .

According to an inscription, the stone baptismal font dates from 1894. Johann Gustav Reinbeck , provost , Berliner Konsistorialrat and confessor of the Prussian royal family, who died on August 21, 1741 during a visit to Schönwalder Palace, was buried in front of the altar ; an epitaph in the form of an obelisk above the portal on the south wall of the church, which is modeled on the entrance to a burial chamber, indicates it. The twelve-armed chandelier above the central aisle is intended to commemorate the Battle of the Nations near Leipzig (1813).

Two bronze bells hang in the tower , a bell cast in the art and bell foundry Lauchhammer from 1928 with a diameter of 84 cm and a bell with a diameter of 67 cm, which was cast in 1979 by the Schilling company in Apolda . In front of these two bells there were three bells in the church tower that have not been preserved: the largest was cast by Heinrich Borstelmann in Magdeburg in 1592 , the middle one in 1852 by Cornelius Rubon (Berlin) and the smallest in 1911 by Gustav Collier from Zehlendorf .

The horseshoe gallery with the Wagner organ

The organ on the west gallery was built in 1738/39 by the important organ builder Joachim Wagner to suit the very cramped space in the gallery and financed by the church patron Otto von Rosey. It has a richly decorated baroque front and was restored in 1935, 1970/71 and 1983; In 1934/35 the disposition of the instrument was adjusted to the original condition by the Potsdam organ building company Alexander Schulke , after changes in sound had been made in accordance with contemporary tastes in the 19th century. Another overhaul was carried out in 2014/2015. In addition to her function in church services , she can also be heard regularly in concerts . In relation to its size with twelve registers (two of which are divided registers and two treble registers) in a manual and pedal , it has a wealth of tonal possibilities. In the lower octave, the note C sharp is missing as a special feature, because it was saved during construction for cost reasons.

The prospectus is divided into a central tower and two lower pointed towers at the side, with a smaller flat area in between, above which the two rotating cymbal stars are attached. The central tower shows a cartouche with the initials of the donor couple Otto and Dorothea von Rosey at the top . The prospectus is in white and gold with individual blue fields and decorated with rich acanthus carvings.

The disposition is as follows: