The title of this article is ambiguous. Further meanings are listed under Döbern (disambiguation) .

Döbern, view of Forster Straße down towards Cottbus

Döbern ( Lower Sorbian Derbno ) is an official city of the Döbern-Land office in the Spree-Neisse district in southeast Brandenburg (Germany). Since December 2013, the city has had the official addition of the name Glasmacherstadt .

The distances to the middle centers of Forst (Lausitz) , Spremberg and Weißwasser are each about 20 kilometers, to the regional center Cottbus about 25 kilometers.

The landscape in and around Döbern is slightly hilly. The striking point is the Hohe Berg , the highest elevation in the area at 184 m (third highest peak in the state of Brandenburg). The Malxe rises on its northern foothills . Pine forests are typical of the area around Döbern, and there is an extensive population of deciduous trees in the city itself, which gives the city its green face.

Döbern and the Hohe Berg with radar tower

The area around the town of Döbern is characterized by the Muskau fold arch . With tremendous pressure, a glacier formed the clearly recognizable fold in the shape of a horseshoe, which extends from Döbern via Weißwasser and Bad Muskau to Trzebiel in Poland. In its area there are layers of sand, clay and coal. This geological structure is visible through residual lakes of the former lignite mining areas and through so-called Gieser (up to 50 m long, 20 m deep and 30 m wide terrain furrows, partly filled with water), which run in a horseshoe shape over the entire fold.

In Döbern there is a continental climate with a greater amplitude between summer and winter. Approximately 550 mm of precipitation fall per year, also due to the effect of orography (influence of elevations on the amount of precipitation, here possible through the Muskau folds). The surrounding opencast mines also have a significant impact on the regional climate. Large areas free of vegetation create a special thermal effect. The lowering of the groundwater at these extraction points also has various effects. The flooding of the Lusatian lake landscape could lead to a new situation in the medium term. Since it is a large area, it remains to be seen how the overall climate changes. 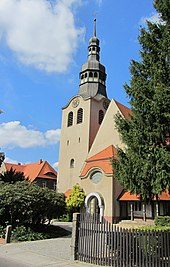 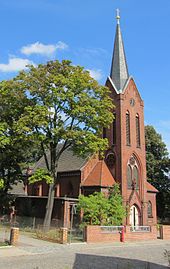 Döbern, whose name can be derived from the Old Sorbian word debṙ for deepening or gorge, is located in the extreme south of Niederlausitz . In a survey in 1850, 12 percent of the 342 residents described themselves as Wendish , in 1867 not a single one.

After the Kingdom of Bohemia ceded the Margraviate of Lower Lusatia to the Electorate of Saxony in the Peace of Prague in 1635 , Döbern was defeated in 1815 together with Lower Lusatia as a result of the Congress of Vienna to the Prussian Province of Brandenburg . It was in the Sorau district from 1818 to 1945 , the western part of which was administered by the independent city of Forst until 1952. After that, Döbern belonged to the newly formed Forst district in the GDR district of Cottbus , which continued to exist as the Forst district in the state of Brandenburg from 1990 and was opened up in the Spree-Neisse district in 1993.

Doebern received in 1969 with effect from 3 October municipal law .

Its founding date, however, remains uncertain. Since the 15th century at the latest, Döbern has existed as a vassal village of the Forst rule , which was owned by the noble family of Bieberstein until 1667 and then fell to the Duchy of Saxony-Merseburg before it came under Saxon sovereignty .

Within a long line of noble owner families, Johann Wilhelm August von Friedrich acquired the Döberner manor in 1838 . In 1850 he had a lignite mine built on his land , one of the first in Niederlausitz. It was shut down again in 1852. Also on Gutsland was in 1857 by the new owner Heinrich Bruhn the pit Heinrich put into operation, which worked until the 1870th In addition, Providentia, which operated until 1934 and operated very productively, was added in 1864 . With the ever-increasing coal production, which was mainly sold in the factories in the surrounding towns, the small, horticultural Döbern, which previously only had a water mill, a brick factory and a brewery, began to develop into an industrial location.

This was all the more true when, in the immediate vicinity of the mine, the Hirsch brothers table glassworks started its work in 1867 and the Fettke & Ziegler glassworks were founded in 1882 . The population of Döbern increased sharply. The buildings on both sides of the road to Muskau , a few hundred meters away from the village, continued to densify. Before and after the turn of the century, the first two glass factories were followed by numerous others, aided by the connection to the railway network that was made in 1891 with the Weißwasser – Forst railway line. A briquette factory was created . The production of container glass began to play a larger role in order to counter emerging sales difficulties for sheet glass . Crystal cutting also increased.

From the 1930s onwards, the distillation of Johann Kocemba was also an important company, producing numerous types of liqueurs, fruit juices, syrups and lemonades and offering a wide range of products until the 1950s. The dissolved company archive with hundreds of labels from around 1930 to 1960 was later offered at Internet auctions.

A short time after the Second World War , the largest glass companies were expropriated, and others from Döbern and the surrounding area were hit in the 1950s. For these companies, which formed the VEB Glashüttenwerk Döbern, a large new steelworks and administration building was built in 1968. The last private and semi-public companies were incorporated into the glassworks in 1972 . The total number of workers was just under 1,800.

With the year 1990 it became increasingly difficult for the glassworks to assert itself under the changed economic conditions. There were changes of ownership. The number of employees began to shrink more and more and fell to a low point after bankruptcies. In 1996 rail traffic also ended.

Döbern, which was parish in Groß Kölzig until 1910 , was given its own Protestant church in 1908. It had had its own school since 1877. Most of the residents of the Catholic faith who had moved here received their parish school in 1902 and their church in 1906.

The formerly independent municipality of Eichwege has belonged to the town of Döbern since 1974, which was called Dubraucke until 1938 and was no longer renamed after 1945.

Apart from a few factory owners' villas and public buildings, Döbern only has a modest number of valuable structural evidence of industrial and community history. The manor house built in 1750 on the site of a presumed moated castle has been neglected, and the manor park as such is unrecognizable.

The city of Döbern does not have its own administration, but is administered by the Döbern-Land office. This office was established on July 31, 1992 with the approval of the Brandenburg Ministry of the Interior. Initially 14 parishes belonged to it. After a municipal reform, the total number of these was reduced to eight by merging. These municipalities make use of the joint administration, the official administration with its headquarters in Döbern and Hornow. The chief of administration is the official director.

The city council of Döbern consists of 16 members and the honorary mayor.

Rocket was elected in the mayoral election on May 26, 2019 with 64.1% of the valid votes for a further five-year term.

Blazon : "In blue under a golden shield head with a cross-laid red deer pole, a silver rafter, accompanied on each side by two crossed silver mountain hammers with golden stems, in the corner a silver goblet."

Partnership relationships have existed with the city of Rheinbach in North Rhine-Westphalia since 1990. Furthermore, there have been partnerships with the Polish city of Jasień for many decades . The cooperation with Jasień has been regulated in a partnership agreement since February 21, 1999.

For years the glassworks, which operates under the new name “Cristalica”, has been working on overcoming its economic difficulties. The workforce currently consists of 55 employees, an increase to 80 is planned.

In autumn 2013, in the presence of the Brandenburg Prime Minister Dietmar Woidke, a 17 meter high glass pyramid was opened on the company premises for the production presentation and sales. A massive wall with exotic portraits and arabesques acts as an additional eye-catcher directly on Forster Strasse.

The city is on the federal highway 115 between Forst and Görlitz . The federal highway 156 between Spremberg , Bad Muskau and Bautzen is 5 km away. To the federal motorway 15 ( triangle Spreewald - Polish border) it is approx. 15 km via the state roads L482 and L48 to the junction Roggosen .

The Döbern station (near Forst) was on the Weißwasser – Forst railway line . It was shut down in 1996.

In 1929 the footballers of FT Döbern won the runner-up title in the competition for the German championship of the Workers' Gymnastics and Sports Association . They lost the final played in the stadium of SC Victoria Hamburg against the local SC Lorbeer 06 with 4: 5 goals.

The soccer team of Chemie Döbern became district champion in 1983 and thus qualified for the second-rate GDR league , to which they only belonged for one season. The team of SV Döbern plays in the 2018/19 season in the regional class south of the Brandenburg regional football association .

Cities and communities in the Spree-Neisse district