The Lutizen (also: Liutizen , Lutitzen , Luitizen ) were a loose union of some north- west Slavic tribes that populated the south-east of today's Mecklenburg-Western Pomerania and the north of today's Brandenburg in the Middle Ages . In contrast to their neighbors, they did not develop a centralized feudal state and resisted Christianization . The term Lutizen was also used as a generic term for all Slavs northeast of the lower and middle Elbe .

The Lutizen were among the as turning designated Elbe and Baltic Slavs that the northwestern part of the western Slavs formed. They were first mentioned by Adam von Bremen in the year 991. The Bund was not a political and state continuation of the Wilzen tribal association from the 8th century, but was re-established after its disintegration by the individual tribes that were formed on part of the former Wilzen territory.

The Lutices spoke Polabian dialects, which are counted as part of the Lechian branch of West Slavonic.

The four core tribes of the Lutizen formed the formerly Abodritic sub-tribes of the Kessiner and Zirzipans as well as the Tollensians and Redarians , who played a leading role within the federal government. The settlement area of ​​these sub-tribes extended in what is now Mecklenburg-Western Pomerania from the Warnow in the west into the greater area around the Peene and Tollense rivers and the Tollensesee . On the periphery there were other sub-tribes, such as the Zamzizi in the Ruppiner Land , the Heveller in the Havel area to the south, or the Ukrer in the Uckermark .

The center of the Lutizenbund was its cult shrine Rethra (also Riedegost ) , which was located near the Tollensesee in the settlement area of ​​the Redarians .

Organization of the Federation

The federal government had a popular assembly, but no central leadership. The tribes thus largely retained their autonomy, but agreed with each other, especially on military matters. This circumstance distinguished the federal government from its neighbors, which were territorial states with a (noble) central power, but also made it an expansion target of the same (especially the Duchy of Saxony and Poland ).

The Liutician tribes practiced a religion that was strongly oriented towards nature and practiced a cult that was a variant of the Slavic religions before Christianization. In various local temples, many-faced deities were worshiped, there were oracles and sacrificial rites. The main sanctuary was the temple in Rethra, where Svarožić was venerated (the name of the temple and the god Riedegost - in variable spellings - was sometimes used synonymously).

In Rethra there was an oracle in which a holy white steed was used as a medium. Analogous oracles are also known from the Svantevit shrine of the Ranen principality in Arkona and the Triglav shrine of the Pomorans in Stettin . Another oracle animal in Rethra was a sacred boar.

There is also evidence of a human sacrifice from Rethra, namely the Mecklenburg Bishop Johannes in 1066. 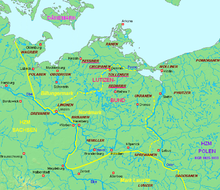 The Lutices played a leading role in the great Slav uprising of 983 , which started from Rethra . Before that, they had resisted the efforts of Emperor Otto I to force the eastern Elbe region under German rule.

Emperor Otto III. Fought them, for example with the support of the Polish Duke Bolesław I in a campaign of 995, but she was able to win Otto's successor Heinrich II in Quedlinburg in 1003 as an ally against Bolesław I and in 1005 and 1017 to participate in a campaign against the same. However, this resulted in several Polish incursions into the Lutizen area. The alliance with the Germans directed against Poland did not last long, as early as 1036 and 1045 there were German campaigns in the Lutizen area, in which the Saxon army was completely defeated in the latter. In 1056 the Lutizen were still able to destroy a Saxon army under Wilhelm von der Nordmark near Havelberg .

The Lutices were encouraged by their successes to adhere to their pagan customs.

Collapse of the Covenant and Fall of the Tribes

In 1057 the rivalry of the Liutician nobility led to a fratricidal war between the Kessiner and Zirzipanen tribes on one side of the Peene and the Redariians and Tollensians on the other. The zirzipans emerged victorious from this war. The vanquished then called on Gottschalk , the prince of the Obodrites and ardent advocate of Christianization of the Slavs, Duke Bernhard of Saxony and the King of Denmark for help. “Ultimately, the Circipans offered 15,000 pounds of silver and thereby bought peace. Our own returned home glorious; there was no talk of Christianity, the victors were only concerned with booty, ”wrote Canon Adam von Bremen about the end of this war.

In the war of liberation of 1066 the Lutizen captured Bishop Johannes I after a successful assault on the Mecklenburg and sacrificed him to their god Radegast on November 10, 1066 in the temple castle Rethra . Thinking about vengeance, Bishop Burchard II of Halberstadt then advanced to Rethra at the head of an army assembled by Henry IV and destroyed the main Slavic sanctuary there. The campaign of King Henry IV in the winter of the following year is likely to have been directed against the Wagrians under their tribal prince Kruto , despite the name given to the opponents at Lampert von Hersfeld as "Luticios" . Campaigns by Saxon dukes in the Lutizen area took place around 1100, 1114, 1121 and 1123. The Danes and the Pomorans now under Polish sovereignty also waged campaigns against the Lutizi. In 1128 the Pomorans penetrated far into the tribal area of ​​the Zirzipans and incorporated the southern part of what was later to become Western Pomerania into their duchy .

Despite the military defeats, the Lutizen continued to maintain their independence until 1147 Saxon, Danish and Polish princes led the Wendekreuzzug against the Lutizen and heralded their end. As a result, the Liutizian lands were divided between the duchies of Pomerania (South Western Pomerania ) and Mecklenburg (eastern part) as well as the Mark Brandenburg (northern part) and thus incorporated into the Holy Roman Empire . The Slavic population, which had already been decimated by many years of war, was Christianized and assimilated in the course of increasing German settlement .

Shaped by the German-Slavic antagonism of the 19th and 20th centuries, two different interpretations of the Lutizen story faced each other until the end of the Cold War . In Germany, historians interpreted the Lutizian Sonderweg as a misguided development that was doomed to failure from the start, which had to end in the downfall of the religious, cultural and political identity of the Lutizen. On the other hand, Polish research into the West saw the meaningfulness of the Lutizenbund in the temporary defense against German expansion to the east, which was what made Poland behind the Elbe Slavic “barrier” possible in the first place.

Neither has been represented since the 1990s, as the Lutizen themselves could not have understood their gentile-religious-alliance organized community as meaningless or as a “breakwater”. Instead, it began to examine processes of cultural and ethnic alignment under the leadership of “traditional cores” among the Lutizen. In this context, Christian Lübke dealt with the ethnic awareness of the Lutizen. He suspects the Lutizen to be a "warlike, megalomaniac and superior form of ethnocentrism ". The application of a modern ethnological model to a medieval ethnicity has met with criticism. For a transferability of the model there is no in-depth investigation of Thietmar von Merseburg's intention to represent , whose chronic reports form the basis of Lübke's knowledge.