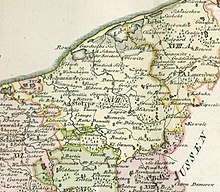 The Stolp district in the 18th century

After Hinterpommern fell to Brandenburg-Prussia in 1648 , the Stolp district emerged from the medieval Bailiwick of Stolp . During the district reform of 1724, the district remained unchanged. In the 18th century, the district comprised the town of Stolpe, the royal offices of Schmolsin and Stolp and a large number of noble villages and estates .

Since July 1, 1867, the Stolp district belonged to the North German Confederation and from January 1, 1871 to the German Empire . In 1871 the town of Stolp, 170 rural communities and 177 manor districts belonged to the district .

On August 10, 1876, the following changes to the county boundaries took place in order to abolish several enclaves:

On April 1, 1898, the city of Stolp left the district and has since formed its own district. The name of the district of Stolp changed to the district . On September 30, 1929, a territorial reform took place in the Stolp district as in the rest of the Free State of Prussia , in which all independent manor districts were dissolved and assigned to neighboring rural communities.

In the spring of 1945 the area of ​​the Stolp district was occupied by the Red Army . After the war ended, the district was placed under Polish administration by the Soviet occupying forces in the summer of 1945 . In the following years the German population from the district sold .

The city of Stolp was spun off from the Stolp district in 1898.

The district of Stolp was divided into the city of Stolp, into rural communities and - until their dissolution in 1929 - into independent manor districts. With the introduction of the Prussian Municipal Constitutional Law of December 15, 1933 and the German Municipal Code of January 30, 1935, the leader principle was enforced at the municipal level on April 1, 1935 . A new district constitution was no longer created; The district regulations for the provinces of East and West Prussia, Brandenburg, Pomerania, Silesia and Saxony from March 19, 1881 continued to apply.

The district was divided into 54 administrative districts in the 1930s .

The district of Stolp last comprised 193 rural communities. In 1937, numerous renaming took place, which are not yet included in the following list.

By decree of the Upper President in Stettin on December 29, 1937, place names were changed in the Stolp district. Since mostly “not German enough”, these were phonetic adjustments, translations or free inventions (with today's Polish names).

Parts of the community and places to live

From 1870 onwards, the Köslin – Stolp – Danzig line of the Berlin-Stettiner Eisenbahn-Gesellschaft was the first to cross the district from west to east> 111.0 <. From 1878 the Prussian Eastern Railway ran from the district town to Stolpmünde on the Baltic Sea and also to Zollbrück> 111.r + u <.

From 1902 the Lauenburg - Bütow line of the Prussian State Railway "111.w" ran through the extreme southeast of the district , and in 1911 Stolpmünde got a second railway line after the neighboring district town of Schlawe "111.p".

The expansion of the small railway network began in 1894 in the south of the district with the Stolp – Rathsdamnitz line, which was laid by Stolpethalbahn AG , extended to Muttrin in 1895 and finally to Budow in 1906> 113.t <.

The north and north-east of the district was first developed from the Stolper Kreisbahn with narrow-gauge railways (750 mm). The longest route ran in 1897 from Stolp via Gabel – Wendischsilkow to Dargeröse and from 1902 to Zezenow on> 113.s <. In Wendischsilkow, later called Schwerinshöhe, a branch branched off to Schmolsin from> 113.s² + s' <. From 1913 on there was a connection from Gabel to Stolpmünde with a branch from Kuhnhof to Zietzen> 113.s² + s³ <. These new lines were laid out in standard gauge, the existing lines were re-gauged in the course of the following years. At the end of 1929, the Stolpethalbahn AG took over all the lines of the Kreisbahn and has been called Stolper Kreisbahnen AG since then, until it was incorporated into the newly founded Pomeranian State Railways in 1940 .

Allegedly, the district of Stolp in the Pomerania region was the largest in all of Prussia. After all, around 1939 he owned a rail network of over 230 kilometers in length, more than half of which belonged to Stolper Kreisbahnen AG , over which the district could exert significant influence with over 60% of the capital. After the integration of the lines into the Pomeranian State Railways from January 1, 1940, the district, along with the State of Prussia and the Province of Pomerania, was part of this corporation with almost two million RM. H. participates with almost 10 percent of the share capital.

The city of Stolp opened a network of electric trams in meter gauge in 1912 , which included four lines.

Administrative districts, cities and districts in the Prussian province of Pomerania (1818–1945)