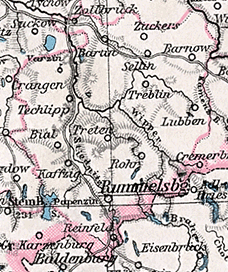 The area of ​​the later district of Rummelsburg belonged to the Landvogtei Stolp-Schlawe until 1724 . But already during the Thirty Years' War , still in the Duchy of Pomerania, this bailiff was divided into three districts for tax collection, so-called quarters . These quarters were headed by district administrators. In the south of the Landvogtei, the Rummelsburgsche Quartier was formed, from which the Rummelsburg district later developed. After the Thirty Years War, Western Pomerania came to Prussia ; the internal administrative division was initially unaffected.

The attempt to reorganize the district structure in the administrative district of Köslin , begun in 1815, failed due to resistance from the residents. The royal order of January 25, 1817 therefore determined that the district division should remain unchanged.

As part of Prussia, the Rummelsburg district belonged to the North German Confederation from July 1, 1867, and to the German Empire from January 1, 1871 .

On August 10, 1876, the following changes took place in the district area:

On October 1, 1932, rural communities Groß Karzenburg, Hölkewiese and Klein Karzenburg were merged from the dissolved Bublitz district into the Rummelsburg i. Pom. incorporated.

In the spring of 1945 the Red Army occupied the area of ​​the Rummelsburg district and placed it under the administration of the People's Republic of Poland . This drove the population out of the district and settled it with Poles .

The coat of arms of the Rummelsburg district was designed by the Munich heraldist Otto Hupp and approved in 1932 by decree of the Prussian State Ministry . On a silver background it shows a red griffin above it, reinforced with gold , in the claws a blue scythe with gold handles, underneath a red wavy bar .

In 1932 there were 17 administrative districts in the Rummelsburg district:

There was a change in the name of a municipality belonging to the district:

The district of Rummelsburg i. Pom. belonged to the following parishes in 1939:

The district of Rummelsburg was only opened up in 1878 by the Prussian Eastern Railway with the Neustettin – Rummelsburg – Zollbrück route, which forked here to Stolp and Schlawe. From the Zollbrück railway junction, the Prussian State Railway continued through the north of the district to Bütow in 1883/84. After the turn of the century, the following routes were added to the south:

The last network expansion came in 1921 - that is, at the time of the Deutsche Reichsbahn - the connection between Zollbrück and Bublitz.

Administrative districts, cities and districts in the Prussian province of Pomerania (1818–1945)