The Volta Reservoir is dammed by the Akosombo Dam near the small town of Akosombo in southeastern Ghana ( West Africa ). With its area of ​​8502 km², it is the largest reservoir on earth that was created entirely by humans. The dam was built about 100 km northeast of the capital Accra . In addition to some other tributaries, it damms the Volta in particular with its three source rivers ( Schwarzer , Weißer and Roter Volta ). 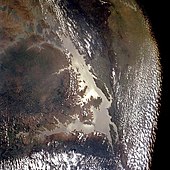 The Volta Reservoir is located in the southeast of Ghana and, due to its elongated, irregularly shaped arms, extends beyond the middle of the country and covers about a tenth of the Volta Basin . It is about as big as the Wadden Sea of the North Sea, which extends over three countries . The Akosombo Dam is located about sixty kilometers from the coast and was built in the Volta Valley, at the point where the river cuts the Akwapim-Togo mountain range . As a result of the expansion of the reservoir, the White Volta and the Black Volta , the Afram , Daka , Pru and Oti flow directly into the lake, so they too are dammed. The Red Volta , the Nasia and the Kulpawn flow into the white Volta before it enters the lake . Ghana's highest point, Mount Afadjato, is located on its eastern bank . Immediately to the west - embraced on three sides by the lake - is the Digya National Park . There are numerous islands and peninsulas of various sizes in the lake.

Downpipes and turbine house of the Akosombo hydropower plant

The hydropower plant has six turbines , four of which with a total of 588  MW were installed in 1965 and the remaining two with 324 MW were only installed in 1972. Together they generate 912 MW (including 15% reserve capacity). While the electricity produced was previously mainly used for aluminum smelting , Ghana's general electricity demand has now risen to such an extent that more power plants have had to be built. Not only to meet the country's needs - the electricity is also exported to the surrounding African countries. This was guaranteed by contracts from the beginning of the project.

Its storage volume has a possible capacity of around 153 billion m³, which corresponds to 153 km³. This makes it the fifth largest reservoir in the world in terms of storage volume. Its mean depth is between 18 and 19 m.

The Volta Reservoir was created from 1961 when the construction of the Akosombo Dam began. In order for the water to flood the country, 78,000 people had to be relocated to other and newly built locations. It stretches over 520 km from the dam in southeastern Ghana to the city of Yapei in northern Ghana. The dam project is the largest and most expensive that has ever been implemented in Ghana. The cost is an estimated 900 million euros.

Ferry connections across the Volta reservoir

Since its construction, the Volta reservoir has gained considerable importance as a traffic and trade route. Ferry connections are operated that often transport people and light goods several times a day. There are ferry connections between the following places: Adawso - Ekyiamenfurom, Kete Krachi - Kwadwokrum, Yeji - Makango and Dambai - to the north bank of the Oti. From Akosombo there is a regular boat trip to Dodi Island. As a further consequence, however, the road connection from Kumasi to Tamale via Yeji lost its importance (in order not to be dependent on the ferry there), and the main traffic shifted to the route via Techiman and Buipe.