The Volta is a river in the states of Burkina Faso and Ghana in West Africa . Together with the Black Volta as the main source river, the Volta has a length of 1500 km.

The former French colony of Upper Volta , today's Burkina Faso, was named after the river . The flag of Upper Volta also referred to the Volta. The river itself got its name from Portuguese explorers, perhaps because it represented the furthest point of their explorations or because of its winding course: volta means "turn" in Portuguese. 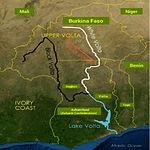 Black, Red, and White Volta, as well as the United River.

The Volta has three source rivers, which are called Black Volta (Mouhoun), Red Volta (Nazinon) and White Volta (Nakambé). All three have their source in Burkina Faso. Near the large trading city of Salaga in Ghana, the black and white volta unite to form the volta. The Rote Volta joins the White Volta beforehand.

The main river is dammed up to Lake Volta at Akosombo Dam . The confluence of the White and Black Volta is now flooded by the reservoir, as are the mouths of practically all of its relevant tributaries. Its most important tributary is the Oti (Pendjari), which is sometimes also referred to as the fourth source river. In addition there are Daka , Pru and Afram to mention.

The Volta flows in a south-easterly direction. Forming the Ada lagoon on the right and connected to the Keta lagoon on the left, it flows into the Gulf of Guinea via a large bar with strong surf (Kalema) .

The enormous breakers on the shallows of its mouth used to occur (i.e. before the construction of the Akosombo Dam in the 1960s) with seasonal fluctuations in the interaction with tidal currents and winds. At that time, the tides on the seashore had an effect up to the level of Malfi , which is about 36 km upstream from the mouth.

Like the Nile and Niger , in the past the Volta had its annual flood area, where it left fertile soil. In particular, the area of ​​the lowest course of the river used to be a center of table salt production.