This article describes the city. For the district see Sušice .

Humpoletz is a redirect to this article. For the British actor, see Paul Humpoletz . 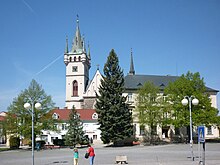 Horní náměstí with the Church of St. Nicholas

Humpolec (German Humpoletz , 1939-1945 and in the Middle Ages also Gumpolds ) is a town in the Czech Republic on the northwestern edge of the Bohemian-Moravian Highlands ( Czech Českomoravská Vrchovina ) and is located southeast of Prague about halfway to Brno . Humpolec has about 11,000 inhabitants. The city is a member of the Zálesí microregion .

Humpolec was created as a guard place in the middle of the border area on the trade route from Prague to Moravia . The first written mention comes from the year 1178. In that year King Ottokar I gave the place Soběslav II. The town was taken over by the Teutonic Order and belonged to the Želiv Monastery until 1325 , then to the Order of the Knights of the Cross with the Red Star . Other owners were the lords of Lipá and later of Dubá , Leskovec and Říčan.

At the time of the Hussite Wars, the area was a supporter of the Kalixtines . The meetings took place on the nearby mountain Melechov . The poor area was severely punished by the campaigns against the rebels by Emperor Sigismund of Luxembourg . After the Battle of the White Mountains , the three lords of Herálec , Humpolec and Manětín , who belonged to Christoph Karl von Ruppau, were confiscated. Herálec and Humpolec sold the imperial chamber to Philip the Elder in 1623. Ä. to Solms-Lich . The subsequent owners were the gentlemen von Kirchner, von Gastheim, von Metternich, von Regal, von Deblin and von Neffzern. Under the rule of the latter, the city experienced an upswing, especially thanks to Jakob von Neffzern, who introduced potato cultivation here. In 1783 a Protestant tolerance prayer house was built. Under the last owner, Count Wolkenstein-Trostburg , Humpolec was proclaimed a free city for eternity in 1807.

In 1840 the protective town of Humpoletz , located in the Caslau district at the intersection of the roads from Roth-Řečitz to Deutschbrod and from Iglau to Ledetsch , consisted of 437 houses in which 3943 people, including 56 Protestant and 34 Jewish families, lived. With the exception of the 29 Jewish houses (280 people) and eleven Christian houses, which were directly subordinate to the Heraletz rule , the city was under the jurisdiction of a city magistrate. The Catholic parish church of St. Nicholas, the parish and the school were under the patronage of the rulership. There was also a Protestant prayer house, a synagogue , a Protestant and a Jewish school, a stately brewery, a stately liquor house, a city hall, a city and a Jewish hospital, a civic pharmacy Zum Weißen Engel , a mill that Abraham Arnsteiner cotton goods factory, two inns, Zum Goldenen Hering and Zum Weißen Löwen, and 16 other inns. According to Humpoletz , the mill Dusilow ( Dusilov ) with a drapery house , two single-layer whitewashing shops , a single-layer washing shop, a single-layer butcher ́s house and two single-layer draperies (4 houses). The city had privileges for three annual markets and weekly markets. Humpoletz was the Catholic parish for Čegow , Kamenitz ( Kamenice ), Swietlitz ( Světlice ), Roskosch ( Rozkoš ), Wilhelmau ( Vilémov ), Plačkow ( Plačkov ), Duby ( Dubí ), Mikulassow ( Mikulášov ) and Bystry . The Protestant prayer house belonged to the Trnawka seniorate .

During the revolutionary year of 1848 a national guard was established; Karel Havlíček Borovský was elected as a member of the Imperial Council.

After the abolition of patrimonial , the city became the seat of the judicial district of Humpoletz from 1849 . From 1868 Humpoletz belonged to the Deutschbrod district . On July 1, 1910, the city became the district town of the newly established Humpoletz district . In the course of the territorial reform of 1960 and the repeal of the Okres Humpolec, Humpolec was assigned to the Okres Pelhřimov . In the 13th to 15th centuries silver was mined in the place, and since the 15th century there has also been a cloth weaving mill in the place, which is still active today. In the 19th century the city was also called "Bohemian Manchester". In addition, the Bernard Brewery has existed in Humpolec since 1597 .