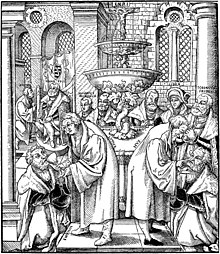 The Kalixtiner (also Calixtiner and Calistiner ; from Latin calix , the cup , Czech.kališníci ; last Utraquists , from Latin communio sub utraque specie , Lord's Supper in both forms - bread and wine ; in Bohemia and Austria also called Kelchner ) were a party of Hussites .

Your demands made by Johannes von Rokitzan in 1420 in the Four Prague Articles included free sermon , the lay chalice , the secularization of church property and strict church discipline in the clergy .

As a moderate party of the Hussite movement, the Kalixtines found support above all from the nobility and bourgeoisie . In the Prague compacts - also called Basel compacts in some publications - at the Basel Council in 1433 they were granted at least the Lord's Supper in both forms . However, all demands of the Prague Articles could not be enforced. As early as 1462, Pope Pius II declared the compacts to be invalid.

In 1457 or 1458 the Bohemian Brothers were founded , a theologically and organizationally independent community of the Utraquist Church. After 1530, under the influence of the Lutheran Reformation, there was another split. While the so-called Altutraquists strictly adhered to the provisions of the Four Articles and the Compactates and also rejected innovations, the New Utraquists adopted numerous ideas from Lutheranism. Only traditional Utraquism was recognized under national law in Bohemia.