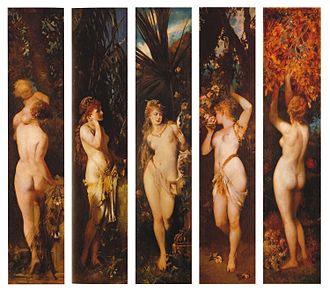 As a sense that is physiological perception of the environment with sense organs called.

Classically, there are five senses in common usage, which were already described by Alkmaion of Croton (without the sense of touch), Democritus and Aristotle .

Near and far senses

The human sensory channels can be divided into distant senses (also telereceptors : hearing , sight , smell ) and near senses (all other senses). Damage to the remote senses is referred to as a sensory impairment , as these senses are the most important transmitters of information for humans. The great importance of the distant senses (hearing and sight) is shown by the fact that our consciousness does not “see on the eyes”, but that the sensory impression of seeing is projected from the brain out of the body, whereas with the near senses (all other senses) it is the sensory impression is directly linked to the organ “you can taste it on the tongue” or “feel with the skin”.

There are also other sensory abilities that are often not consciously or directly perceptible. In humans, for example, the blood pressure receptors in the throat area, with which internal control circuits ensure a high-quality and even blood supply to the body, especially to the brain. In normal conditions, this signal is constantly well regulated, but if this no longer succeeds, disturbances of the overall condition occur, such as sudden loss of consciousness. It is similar with blood sugar or oxygen saturation .

Furthermore, psychological skills, such as the perception of time , are sometimes referred to as meaning. However, no specific physiological receptors are known for this.

In animals , other senses can be added.

Rudolf Steiner's theory of the senses

The occult - spiritual publicist Rudolf Steiner postulated twelve senses in his sensory theory , which he divided into "more physical" and "more spiritual" senses.

The Steiner argued in his lectures and writings supernatural world insights into biology and sciences, natural and man, have no philosophy of science , real basis. According to Hartmut Zinser , Steiner denies "(..) the character of belief in these statements and presents them as objective facts accessible to the 'occult vision', the 'clairvoyant awareness', the 'spiritual vision' (..)."; in the sense of modern occultism , no distinction is made between perception and idiosyncratically constructed interpretation .

In synesthetes, there is crosstalk between sensory channels or their processing centers, so that, for example, sounds are perceived as colored patterns.

The expression "sixth sense" is used when someone notices something without (consciously) perceiving it with the known sense organs , which can sometimes be felt or imagined in the sense of an "extra - sensory perception" ( psi abilities , telepathy , clairvoyance , precognition ) .

In common parlance, however, the “sixth sense” must be conceptually separated from “extra-sensory perception”, because the “sixth sense” is usually a slang term used to describe an everyday situation. As a rule, this is not intended to make a specific statement about how the perception in question worked (it may well be unconscious perception with the normal senses or a merely accidental intuition); It only expresses that it could not be clearly explained in the given situation.

Claims about “real extra-sensory perception” in the narrower sense, however, are assigned to the area of esotericism .

Scientists from Washington University in St. Louis (USA) were able to use magnetic resonance imaging to demonstrate that a certain brain region, the anterior cingulate cortex (ACC), represents an early warning system that is activated when there is a risk of a wrong decision. This brain region, located in the frontal lobe , may receive environmental signals that are analyzed for potential dangers. If a situation is interpreted as "dangerous", the system sounds an alarm so that the individual has the opportunity to initiate a change in his or her current behavior. People who have escaped a dangerous situation in this way without being able to consciously explain their intuition then tend to attribute this to their "sixth sense".