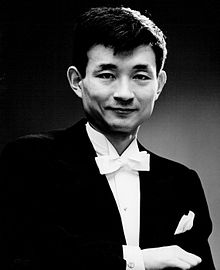 Seiji Ozawa was born in Manchukuo , the son of the dentist Ozawa Kaisaku . He first studied piano at the Tōhō Gakuen Daigaku in Chōfu . After a rugby accident in which he broke two fingers, he switched to the subjects of composition and conducting , which he graduated in 1958. In 1959 he received a prize from the International Competition of Young Orchestra Conductors in Besançon and an invitation from Charles Münch to the Tanglewood Music Center , where Ozawa won the Koussevitzky Prize as a student conductor in 1960 . Through Michiko de Kowa-Tanaka he got a scholarship from Herbert von Karajan .

In 1961 he became Leonard Bernstein's assistant conductor for the New York Philharmonic . A year later he gave independent concerts with the San Francisco Symphony . From 1964 to 1969 he was music director of the Ravinia Festival , the summer residence of the Chicago Symphony Orchestra . From 1965 to 1969 Ozawa was music director of the Toronto Symphony Orchestra and from 1970 to 1976 of the San Francisco Symphony.

In 1973 Ozawa became music director of the Boston Symphony Orchestra and was until 2002. There are currently only a few living conductors in the world who have been able to work continuously with a large orchestra for so long. He also led the BSO in modern music epochs. Tours with the BSO have taken him to Europe , the People's Republic of China , Japan , South America and across the USA . He made over 140 recordings by 55 composers on ten labels . In 1976 he received the first Emmy Award for TV series of symphony concerts . Ozawa founded the Saito Kinen Orchestra in Japan in September 1984 .

In 1990 he gave a series of gala concerts for the 50th anniversary of Tanglewood Music Center. Seiji Ozawa co-founded the Saito Kinen Festival in Matsumoto in 1992. It is named after his teacher in Tokyo , Hideo Saitō , who brought western music and playing technique to Japan. For a long time Ozawa was on the road with the Orchester National de France as well as at La Scala in Milan and the Vienna State Opera.

In October 2002 Ozawa became music director of the Vienna State Opera , which accommodated his growing interest in operas . He has often been a guest conductor there before and has led the Vienna Philharmonic on tours and at the Salzburg Festival . In addition, he conducted the New Year's Concert of the Vienna Philharmonic in 2002 . After Ozawa was diagnosed with esophageal cancer in 2010, he gave up his position at the Vienna State Opera and withdrew from concert operations. In 2013 he returned to the desk.

The promotion of modern music and young composers is very important to him . There are around 400 recordings of Ozawa on CD, mainly with the Boston Symphony Orchestra . 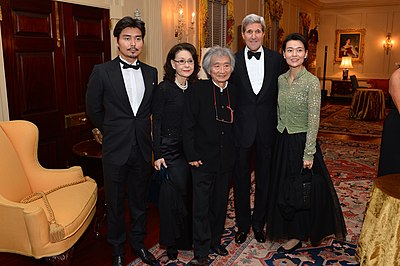 Ozawa received honorary doctorates from the University of Massachusetts , the New England Conservatory of Music, and Wheaton College , Norton, Massachusetts .