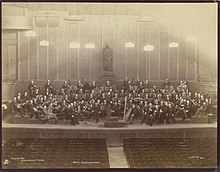 The BSO was founded in 1881 on the initiative of Henry Lee Higginson, the first concert took place on October 22, 1881 under the direction of George Henschel . From 1973 to 2001, Seiji Ozawa was the orchestra's music director ; these 27 years are the longest time that a leading conductor has ever been able to work continuously with this orchestra. From 2001 to 2014 James Levine was the conductor of the BSO, from 2004 to 2014 he was also its musical director. In 2014 Andris Nelsons took over the role of chief conductor and music director.

The BSO's program covers all styles from pre- classic and classic to modern . With Ozawa alone, the orchestra made over 140 recordings by 55 composers on 10 labels - and on tours to Europe , the People's Republic of China , Japan , South America and across the USA . Recordings have been awarded a Grammy seven times .

Béla Bartók composed his Concerto for Orchestra in 1943 for the BSO, Leonard Bernstein in 1980 the Divertimento with the march “The BSO Forever”.

The Boston Pops Orchestra (since 1885) and the Boston Symphony Chamber Players (since 1924) emerged from the orchestra as side projects .