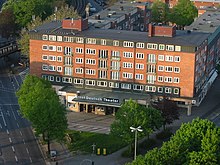 The Ernst-Deutsch-Theater (original spelling without hyphens) in Hamburg is Germany's largest private spoken theater with over 200,000 visitors per season. The main stage on Friedrich-Schütter-Platz at Mundsburg has 743 seats. The theater has its own workshops and employs around 120 people, 30 of whom are marginally employed. 400 performances per season take place at three venues.

It was founded on October 13, 1951 by the actors Friedrich Schütter and Wolfgang Borchert and some like-minded people - a “protest action” by young committed actors against the repertoire of the stages that were reopened shortly after the end of the war. The aim was to offer young actors opportunities in Hamburg's cultural landscape and to create a stage for contemporary drama. The first venue was the British Information Center on the Große Bleichen in Hamburg's Neustadt district . One year after the opening, it moved to Neue Rabenstrasse in Rotherbaum in 1952 , then to rooms on Marschnerstrasse in Barmbek-Süd in 1956 and finally to its current location in 1964, in the former UFA-Palast cinema on Mundsburg. 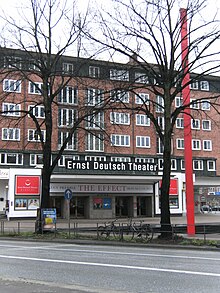 In 1973 the theater was renamed "Ernst Deutsch Theater" in honor of Ernst Deutsch . The great German actor of Jewish origin had to emigrate from Germany in 1933. After his return from the USA, he influenced German post-war theater through his personality and outstanding acting skills. With his portrayal of Lessing's Nathan , he left a lasting mark on the house at Mundsburg.

Friedrich Schütter, who also appeared as director in many plays as an actor or director, succeeded time and again in attracting well-known guests to his house and in realizing numerous performances that have received attention far beyond Hamburg.

After Friedrich Schütters death in 1995, Isabella Vértes-Schütter took over the artistic direction and modernized and opened the theater. The youth section platform was founded in 2003.

Vértes Schütter directorship was 2004-2006 interrupted ( Volker Lechtenbrink took over as director) because Vértes Schütter in Hamburg state election campaign in the competence team of Thomas Mirow was represented.

After her return to the theater, Isabella Vértes Schütter continued to develop the variety of programs. In 2008, an additional venue was opened for the youth division: the “platform” stage. In addition, there has been a redesigned foyer with a studio stage for literary and musical programs since 2015.

With its repertoire, which encompasses all genres of acting, the Ernst-Deutsch-Theater wants to enable the examination of the past, present and future in an exciting, dramatic form. Works of the classical and modern, current pieces of time as well as children's and youth theater are offered. In addition, a wide variety of extra events are presented, including a. Poetry Slam , National Youth Ballet, Bertini Prize. In terms of programming, the theater relies on freedom of culture and art, diversity of programs, democratic principles and intercultural exchange.

In 2003 the youth division “platform” was founded. plattform is a place of discussion between young people and artists, between theater and youth culture. It's about learning from one another, in theory and in practice. plattform sees it not only as a task to introduce young people to the medium by means of theater performances, but also wants to encourage them in their own creativity, encourage them to participate and lively involve them in a social and cultural discourse. Young people from the age of 12 are active in various youth clubs, here they try out things, grow beyond themselves and find themselves in the spotlight. The platform festival has been held annually since 2003 , and over 250 young people take part. In 2020 the platform festival was awarded the Barbara Kisseler Theater Prize.

The theater hall has two wheelchair spaces. The theater offers individual hearing support for people with and without hearing aids. The auditorium also features Sennheiser streaming technology. Performances and introductions to plays with sign language interpreters are offered regularly. On selected dates the theater offers performances with audio description. The dates are marked in the schedule. 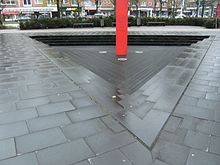 In 2003 and 2011, the Ernst-Deutsch-Theater received the Pegasus Prize , which has been awarded to a Hamburg private theater every year since 1999.

Surroundings of the theater

In 2001 the forecourt of the theater was named Friedrich-Schütter-Platz. This applies to the memory of the co-founder and director of the Ernst-Deutsch-Theater Friedrich Schütter (1921–1995). The hallmark in the middle of the square is the 18 meter high red stele. The square was designed by the designer Peter Schmidt and inaugurated in 2009.