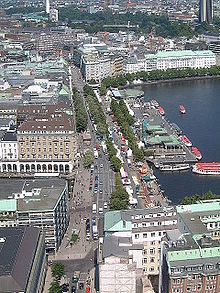 Jungfernstieg
looking towards Gänsemarkt
(August 2005, before the renovation in 2006)

The area around the Inner Alster has been significantly redesigned, here is a view of the old "Dammthor" around 1527. The Alster has its main drain on the right to today's Nikolaifleet 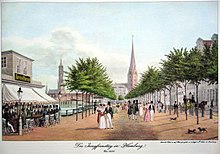 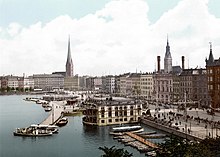 The Jungfernstieg (from Low German Stieg for " Steig ") in Hamburg is a street on the southern bank of the Inner Alster in downtown Hamburg . It runs from the Reesendamm bridge to the Gänsemarkt .

Originally created as a Reesendamm to dam the Alster in 1235 under Count Adolf IV of Schauenburg and Holstein , it was the location of the Obermühle. One of the oak piles from which the dam was built has been made into a sculpture by Richard Luksch , which can be viewed on the platform of the U1 and commemorates the victims of a water ingress during the construction of this station in the 1930s. In 1838, Jungfernstieg was Germany's first road to be paved.

After the Great Fire in 1842, the Alster was regulated; its main drainage was directed through an old fortress ditch under the Reesendamm bridge through the Kleine Alster to the Alsterarkaden , while the old drainage took place through today's Nikolaifleet . The south side of the Jungfernstieges was rebuilt. From 1843 to 1881 the first large shopping mall, the Sillem's Bazar , was on Jungfernstieg.

The street got its name from a civil rite: On Sundays, families took their unmarried ladies, the maids , for a walk on the promenade .

The “Hamburger Hof” today:
Entrance to the shopping arcade 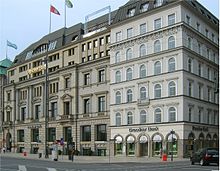 Until September 2005 the Jungfernstieg was an avenue-like promenade with trees on both sides and in the middle (see picture above right). There were only two smaller buildings on the waterfront: a travel agency with a bistro and the Alster pavilion , a café.

Its appearance has been completely redesigned. With the exception of the Alster pavilion, all of the pier's buildings were demolished. The entire Jungfernstieg was given a lighter pavement on both sides. The row of trees in the middle of the street was removed, the street narrowed, but at the same time the sidewalks widened. As a result, events such as the popular Alster pleasure were given more space. The completed renovation, including the redesign of the jetty, was completed with an official opening ceremony on May 20, 2006.

The North (öst) Liche side forms the south (west) Liche banks of the Alster Lake , with a clear view on this until the Lombard Bridge , the Alster fountain on it and the investor for the fleet of white " Alsterdampfer " (even if today only a only museum ship actually runs on steam). The alley-like impression is continued by the northern (eastern) side streets Ballindamm and Neuer Jungfernstieg . The Jungfernstieg now runs in a south-easterly direction towards the newly built Europa Passage , and the Colonnades also begin at the opposite confluence of the New Jungfernstieg . Up to the Gänsemarkt there is a closed development with shops, including the Wrangelhaus (1913, architect: Albert Lindhorst).

The south (west) side begins at the Reesendammbrücke with access to the Alster arcades along the Kleine Alster , a former moat between the Alter Wall and Neuer Wall , via which the Alster is now connected to the Elbe by two locks . The Bleichenfleet , located between the southern (western) side streets Neuer Wall and Große Bleichen , is no longer visible on the Jungfernstieg due to overbuilding. There is no longer a direct connection from the former city ​​water mill to the Inner Alster . Further along the south (west) side are commercial buildings with many prominent fashion stores and jewelers. Mention should be made of the traditional Alsterhaus , a premium department store and the main Hamburg branch of Dresdner Bank , which was designed by Martin Haller . Beyond the Große Bleichen , the Hamburger Hof shopping arcade begins , in the office building of the same name made of red Main sandstone, with a passage to Poststrasse and on to the Hanseviertel . This is followed by the Heine-Haus , an Art Nouveau building from 1903, which was renovated true to the original in 2003 except for the roof, which was given a different shape for cost reasons. Salomon Heine's house originally stood here . Until 1999 it also housed W. Schümann's oyster cellar - with its original Art Nouveau furniture, it was one of the most traditional (founded in 1884) restaurants that were once typical of Hamburg. In dispute house next to it was before the Second World War dispute Hotel and then, by 2013, Streit's cinema . Against this was on October 5, 1841 for the first time Germany song by Hoffmann von Fallersleben sung in public. A movie theater of the same name has been housed in the house since the 1950s and has already seen numerous premieres.

The Jungfernstieg pier is the main pier for the Alster ships , from which all lines, Alster tours and special trips depart.

The open space at the corner of Jungfernstieg / Neuer Jungfernstieg was renamed to Yüksel-Mus-Platz on September 26, 2017 and a plaque was attached to the name giver, a long-term street cleaning employee who died in 2015.

U- and S-Bahn station

The underground and S-Bahn station of the same name is located under Jungfernstieg, where the U1 , U2 and U4 lines and the City S-Bahn ( S1, S2, S3 ) intersect.

The original terminus of the U1 (at that time the end point of the “KellJung” line ) was built in 1930 (construction only continued in 1955), the S-Bahn was built in an open excavation under the Alster from 1969–1975 (architect: Fritz Trautwein ) and passes under the U1 On another level below and completely below the Inner Alster is the U2 station, which opened in 1973, with its two platforms, which have also been used by the U4 since 2012 .

Due to its proximity, there has also been an underground connecting passage below Bergstrasse to the Rathaus station on the U3 line since 1958 . Exits to the station complex can be found in the streets Jungfernstieg , Rathausmarkt , Ballindamm , Bergstrasse , Alstertor and Mönckebergstrasse .

In the course of the redesign of the Jungfernstieges in 2006 a new bus stop was set up.

The street laid out in 1827 on the west bank of the Inner Alster is called Neuer Jungfernstieg .

After the construction of a new city fortification for Hamburg , the old systems were no longer needed and the area around the Inner Alster was considerably redesigned.

Streets of the same name

There is also a Jungfernstieg in several other German cities, u. a. in Berlin-Lichterfelde , Dieburg , Eckernförde , Flensburg , Glückstadt , Haldensleben , Kiel , Rendsburg , Ringleben , Schwerin , Stralsund , Wiek on Rügen and Wolmirstedt .