This article describes the former Swedish tennis player. For the swimmer of the same name, see Björn Borg (swimmer) .

In the course of his relatively short career, Borg won 66 individual titles, including 11 Grand Slam titles. From 1976 to 1980 he won five consecutive Wimbledon titles, and between 1974 and 1981 he secured six titles at the French Open . As part of the team , he brought the Davis Cup to Sweden for the first time in 1975 . He also won the season's final tournament, the Masters, twice .

In 1979 and 1980, Borg finished at the top of the world rankings . He was one of the dominant players of the second half of the 1970s and early 1980s and is counted among the best players in tennis history.

As early as 1972, at the age of 15, Borg caused a sensation when he won his first Davis Cup match for Sweden. In the same year he also won the Wimbledon junior title. 1973 Borg played his first full season on the professional tour and reached the second round at the French Open and the US Open, as well as his first quarter-finals at Wimbledon.

In 1974, at the age of 17 years and 11 months, he won his first professional title at the Italian Open . In the same year six more titles were added, including the title at the French Open , which Borg won as the youngest player to date. He finished the season in third place in the world rankings. In 1975 he continued his rise to the top of the world. Among his five season titles was again the title at the French Open, which he won in the final against Guillermo Vilas . At Wimbledon, Borg reached the quarter-finals again, and even the semi-finals at the US Open. At the end of the season he led Sweden to their first Davis Cup triumph; Borg won both singles in the 3-2 final victory over Czechoslovakia .

In 1976 he won his first title at Wimbledon - in the final against the favored Ilie Năstase . The success of the clay court specialist Borg was considered a medium sensation at the time. In the big clay court tournaments himself, however, he was unsuccessful this year; he failed each time at world number one Jimmy Connors - at the French Open in the quarter-finals and at the US Open in the final. In 1977 Borg defended his Wimbledon title in a five-sentence thriller against Connors and meanwhile took first place in the world rankings. With a total of eleven season titles, he ended the fourth season in a row among the top three players in the world.

In 1978, Borg finally dominated the professional tour. With nine wins of the season he also managed the first double of the French Open and Wimbledon, at the US Open he lost the final against Connors again. In 1979 Borg was able to defend the titles in Paris and London and end a season as number 1 in the world rankings for the first time with ten other titles. He also won the Masters for the first time in his career , which only took place in January of the following year.

In 1980, Borg managed the third double of the French Open and Wimbledon in a row, which is still one of the greatest achievements in tennis history. In the final of the US Open, however, he lost for the third time in a row, this time to the up-and-coming John McEnroe . Thanks to another Masters title and nine more titles, Borg finished the season at the top of the world rankings.

The 1981 season was his last big one. For the third time in his career, Borg made three finals in Grand Slam tournaments. At the French Open he celebrated his fourth title in a row and sixth tournament victory overall (this record was not set by Rafael Nadal until 2011 ), at Wimbledon, however, his record series of five titles in a row ended with a final defeat against John McEnroe. And also in his fourth US Open final he lost to McEnroe. Borg then won his 66th and final title in Geneva in September 1981.

After the season he decided to take a four-month break from the tournament. He only entered the tournament in Monte Carlo (his residence), where he reached the quarter-finals. The officials then advised him that in future he would have to play the qualifying rounds of the respective tournaments if he did not play the required number of tournaments during the season. Borg then ended the 1982 season prematurely. In 1983 he competed again in Monte Carlo and shortly afterwards - at the age of just 26 - announced his resignation.

In the following ten years, Borg made several comeback attempts. He failed in the first round of tournaments in Stuttgart in 1984, in Monte Carlo in 1991, in a total of eight tournaments in 1992 and in another three tournaments in 1993. In Moscow he finally lost the decisive tiebreak against Alexander Volkov in November 1993 , whereupon he finally ended his career. He has been a player on the senior tour for many years.

Björn Borg, along with Anja Pärson and Ingemar Stenmark, is the only athlete to have been honored twice with the renowned Svenska Dagbladet gold medal (1974, 1978).

Björn Borg revolutionized the game of tennis by developing and perfecting a fundamentally new grip and striking technique. While until then the same universal grip ("shake hand grip") was more or less common for forehand and backhand , Borg used a different grip position for the forehand ("Western") than for backhand strikes ("Eastern"). Although he was not the first top player with a two-handed backhand - the somewhat older Jimmy Connors already played the backhand with both hands - his grip position enabled him to hit mainly on the backhand side, which the reaction time of the opponent was enormous shortened. Borg perfected the topspin technique, which Rod Laver had already further developed, and played it extremely precisely and reliably. This enabled him to dictate his games mainly from the baseline. Against his powerful and extremely precise topspin strokes, tennis players with outdated grip and stroke techniques were mostly at a loss.

The disadvantage of the topspin shot, the reduced ball speed, was more than compensated for by the increased precision and the far greater security. Because the "straight" and thus faster and more powerful strokes carry a higher risk of landing either in the net or behind the baseline due to the flatter trajectory.

Borg's dominant position in top tennis was primarily based on this technique. In the meantime, it has become the basis of modern tennis and of course at all levels - from beginners to top players.

However, Borg was also known for being cool ; one never saw his emotions during an encounter. Neither hopeless arrears nor antics of his opponents or wrong decisions by the referees and linesmen disturbed him. This earned him the nickname Ice-Borg in the English and American press . Often he only played his best tennis on the verge of defeat and turned around matches believed to be lost. In his autobiography, after the end of his career, Borg revealed the reason for his apparent apathy: As a junior, he was banned for several months due to a violent tantrum after a blatant disadvantage. Wrong decisions did not leave him indifferent afterwards, but he no longer showed his displeasure. Borg's coolness resulted from his consistent self-discipline.

His image also included his exceptional fitness for the time. He was always well trained and his opponents cannot remember ever seeing him sweat profusely or even with difficulty breathing. Behind this, however, was extremely tough and sophisticated training with his long-time coach Lennart Bergelin or his friend Vitas Gerulaitis , who were top 10 players at the time. Borg brought a new professionalism to the "men's sport" tennis. 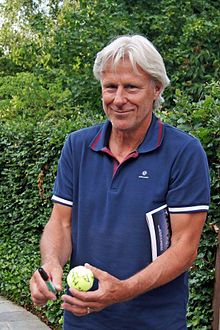 Because of his aura , Björn Borg became a formative role model - especially for young people who are interested in sports and far beyond tennis. Borg sparked a real tennis boom. Many who hadn't known what to do with tennis up until then suddenly became interested in this sport; Countless children began to learn to play tennis just to emulate it. In this respect, it seems entirely justified when the tennis world - based on Beatlemania - spoke of a "Borgmania". Björn Borg deserves the great merit of having turned the niche sport of tennis into a decidedly popular sport.

Its marketing was also groundbreaking. The now global marketing and modeling agency International Management Group (IMG) of the late Mark McCormack grew up with sports personalities like Borg and the golfer Arnold Palmer .

After his professional career, Borg tried his hand at being a businessman. However, several large-scale economic projects did not achieve the desired success. Although his fortune was estimated at about US $ 80 million towards the end of his career, Borg filed for bankruptcy in Sweden in 1996 . He has now overcome this economic low point and is now a successful businessman in Sweden.

Björn Borg has been namesake for a clothing and perfume brand that is particularly successful in Scandinavia for several years. In 2004, customers spent around 70 million euros on Björn Borg products. On December 20, 2004, the brand owner World Brand Marketing (WBM) was listed on the Stockholm Stock Exchange OMX (Neuer Markt).

Borg was revered as a star for his successes , but the taciturn Ingemar Stenmark , who was acting at the same time, was a hero .

Björn Borg was born in Södersjukhuset in the south of Stockholm. He grew up in Södertälje .

His first youth romance was the tennis player Helena Anliot , who later also played the sport professionally. On July 24, 1980, Borg married the Romanian tennis player Mariana Simionescu in Bucharest , and in 1984 they were divorced. In 1985 he met the photo model Jannike Björling, with whom he had his son Robin (* 1985); they separated in 1988. Between 1989 and 1993 he was married to the Italian singer Loredana Bertè . Borg has been married to Patricia Östfeldt since June 8, 2002, with her he has his son Leo (* 2003).