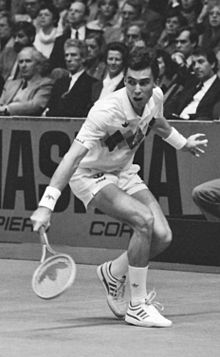 Lendl 1984 in the final of Rotterdam

Lendl, who accepted US citizenship on July 7, 1992, won eight Grand Slam singles titles in his career and reached the previous record of 19 finals in tournaments in this category. With a total of 270 weeks at the top of the world rankings , including four times at the end of the year (1985–1987, 1989), Lendl was one of the most successful tennis players of all time.

In his 17-year career, he won 94 singles titles, including three French Open and US Open and twice the Australian Open , plus six doubles titles. Only a success at Wimbledon , where he reached the final twice, was denied him. In addition, he won the Masters five times and the Davis Cup in 1980 with the Czechoslovak team . In his balance sheet there are 1068 games won against 242 defeats (in Grand Slam tournaments 222: 49).

Since 2012 (with an interruption from 2014-2016) Lendl has been working as the trainer of the British Andy Murray , who achieved his greatest successes under him and in November 2016 was number 1 in the world rankings.

Already in his youth Lendl was an outstanding player, so he won the individual junior title at the French Open and Wimbledon in 1978 and was listed as number 1 in the junior world rankings. In the same year he became a professional, in 1979 he reached his first individual final in the men. In 1980 Lendl won seven tournaments, in three weeks he was able to win three tournaments on different surfaces. In 1981 he won ten tournaments and reached the first Grand Slam final of his career at the French Open, which he lost in five sets against Björn Borg . Lendl was also in the Czechoslovak team, which won the World Team Cup in 1981 and which was runner-up in 1984 and 1985. In 1982 he finished 15 of 23 tournaments to which he competed as the winner, but he lost again a Grand Slam final, this time against Jimmy Connors at the US Open. He had a winning streak of 44 games and also won the season-ending tournament, the WCT Finals, for the first time. There he defeated John McEnroe without losing a set. He met McEnroe again in the final of the Masters Grand Prix and won again without losing a set. During this time the prize money increased due to the competition between two tennis tournaments (Grand Prix and WCT), Lendl became the best-earning player of all time.

In the following season, Lendl remained consistently among the best players in the world. But he had to admit defeat in two other finals at Grand Slam tournaments. In 1983 he won seven tournaments. Finally, in the 1984 season, the first victory at one of the most important tournaments in the world followed. At the French Open in Paris Lendl turned a 2-0 set deficit in the final against John McEnroe and won his first major tournament victory.

The 1985 season was one of the best in Lendl's career. Among his 11 individual titles was his first win at the US Open, where he had previously failed three times in a row in the final. He reached the WCT Finals for the second and final time, beating Tim Mayotte in three sets. In the next two years Lendl should win the US Open, plus two more victories at the French Open and two finals at Wimbledon. So Lendl ended the years 1985-1987 as the best player in the world rankings . From 1985 to 1987 he won the Masters Grand Prix again. After two years with three Grand Slam finals each, Lendl reached the final in the 1988 season only at the US Open, where his streak of 27 wins in a row ended in a tight five-set game against Mats Wilander . In 1989 the first triumph at the Australian Open followed. In Paris he lost 6: 4, 6: 4, 3: 6, 3: 6, 3: 6 in a legendary match in the round of 16 against cramped Michael Chang, who was on the verge of a task . At the tournament in Wimbledon, Lendl did not get past the semi-finals this season, as in the following years of his career.

In 1990 the series of eight finals in a row at the US Open ended, at the Australian Open Lendl won the eighth and last Grand Slam title of his career and at the end of the year he was among the top three players in a season for the tenth time in a row break up. At the Australian Open in 1991 he reached the last Grand Slam final of his career, he lost the match against Boris Becker in four sets. The last three years of his career were marked by persistent back problems and early defeats at important tournaments. Finally, Lendl ended his career in 1994 at the age of 34 and then devoted himself increasingly to golf. On February 28, 2011, he played a friendly with John McEnroe at Madison Square Garden . For the first time since the 1970s, Lendl played again in May 2012 at the Sparta Prague Open tennis tournament in Prague .

In 2001 Ivan Lendl was inducted into the International Tennis Hall of Fame .

Success as a trainer

Lendl comes from a tennis-loving family. His mother, Olga Lendlová, was one of the most successful tennis players in Czechoslovakia and was the country's second best player in her day. His father, Jiří Lendl, was also a good player, who later became chairman of the Czechoslovak Tennis Federation. In 1978 Ivan Lendl became a professional tennis player.

Lendl has lived in the United States since 1981 and moved there permanently in 1984. In 1987 he applied for and got a green card, and in 1992 he became a US citizen . In 1989 he married Samantha Frankel. He now lives in the US state of Connecticut with his wife and five daughters . Lendl plays golf and controls the sporting development of his daughters, especially their golf skills. Two of his daughters, Marika and Isabelle, are members of the University of Florida Women's Golf Team . Caroline is a member of the University of Alabama rowing team . Daughter Nikola enjoys eventing.

He collects works by the artist Alfons Mucha .