The Madison Square Garden , also known as The Garden known and MSG abbreviated, is a multi-purpose arena in the US Manhattan , New York City . The hall has its own television station and calls itself "The World's Most Famous Arena". The event arena is mainly used for sporting events ( boxing , basketball , ice hockey ) and concerts .

The property at 26th Street and Madison Avenue was owned by the Vanderbilt family, who used it as a waiting room for passengers on their railway line, the New York and Harlem Railroad . When the depot was moved to the Grand Central Terminal in 1871 , the old building was rented by PT Barnum . When Barnum's exhibition “The Greatest Show on Earth” turned in a profit, he began looking for a permanent location for his spectacular show.

Barnum opened "The New York Hippodrome" on April 30, 1874, later Madison Square Garden . It was the largest amusement building ever built and had over 10,000 seats. The construction cost was $ 150,000. The lavish productions that were shown in the Hippodrome set the standard for the future, spectacular and first-class performances associated with the name Barnum. In 1875, Patrick S. Gilmore , a well-known bandmaster who composed the song When Johnny Comes Marching Home , rented the building from Barnum and named it "Gilmore's Garden". The landscaper John Thornhall planted ferns and trees and had fountains installed - like in a garden, because the house had no roof. He even made sure that electricity was put on. Various sporting activities took place such as fencing, weight lifting, juggling with clubs and cannonballs, wrestling and cycling, as a drawing shows. An engraving shows the drivers on a wooden track with spectators in an open grandstand, on and outside the track, as well as people sitting at tables and a chapel inside the track. Finally, "Gilmore's Garden" was renamed "Madison Square Garden" by William Henry Vanderbilt after the nearby square or park and reopened on May 31, 1879. Track and bike races were originally intended to take place here. On February 12, 1879, the first artificial ice rink in North America was opened in the Garden. The garden was without a roof, hot in summer and freezing in winter.

William Henry Vanderbilt formed a syndicate with other donors that consisted of JP Morgan , Andrew Carnegie , James Stillman and William Waldorf Astor . The latter had the first garden demolished in July 1889 and commissioned star architect Stanford White to design a new building. The "second" Madison Square Garden cost $ 3 million and opened on June 6, 1890. It was modeled on the Moorish style of Seville Cathedral. At 32 stories in Madison Square Park, it was the second tallest building in the city. The main hall of the gardens was the largest in the world, measuring 200 × 350 feet (61 × 110 m), with permanent seating for 8,000 people and standing room for thousands more. There was a theater with 1,200 seats, a concert hall with seating for 1,500 people, the largest restaurant in town and cabaret on the roof garden. Still, Madison Square Garden II was unsuccessful. The syndicate of investors, men with enormous wealth, no longer wanted to "throw good money after bad" and in 1911 sold the Garden II to a real estate company.

Boxing promoter Tex Rickard proposed to the owner of the garden to have a full season of boxing matches every Friday night, followed by a summer swimming season. He would organize boxing matches in all classes as well as title fights. Rickard told them that he could bring not just some but all of the boxers into the Garden Hall. The owners of Madison Square Garden trusted Rickard's plans and signed a ten-year lease, concessions, and everything else with him on July 20, 1920 for $ 300,000 a year. This was supported by a sub-leasing contract with John Ringling, the Circus Impresario and mainstay of the gardens. Rickard's work began on August 1, although Governor Alfred E. Smith did not appoint the boxing commission and licensing committee until August 12. Rickard's first boxing match, held under the laws of the New York New York State Athletic Commission (NYSAC), would be in Madison Square on September 17, 1920. In addition, Rickard's plan for the garden provided for a renovation of the building with an expansion of the seating capacity to a total of 13,000, as well as a conversion of the huge amphitheater into an indoor swimming pool during the summer months. So he wanted to make the garden profitable when there were no boxing matches. His plans were realized. 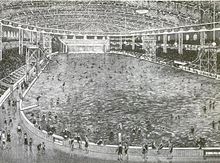 The indoor swimming pool was the highlight in the summer of 1921 and a miracle of modern technology. The pool was tiled in white, 75 m long, 33.5 m wide and contained 1.5 million gallons of water at a depth of 0.90 m to 4.50 m, with a waterfall at the far end of the pool a height of 25 feet (7.6 m). There was recreational swimming, as well as amateur and professional swimming competitions.

In addition to boxing and the swimming pool, Rickard was also successful in using the MSG for a number of other events. The first Democrats' congress took place here in 1924 , as did the 6-day races that peaked under him. Rickards also wanted to involve women in the sport through charity events, especially boxing, and thus improve the image of this sport.

The New York Life Insurance Company, which owned mortgages on the building, canceled them in 1916 and pushed for the end. The second building was the last that was actually in Madison Square . It was demolished in 1926 and in its place the New York Life Building was built based on a design by Cass Gilbert and inaugurated in 1928.

Diana of the Tower

"Diana" goddess of the hunt on the tower of the MSG

The architects McKim, Mead, and White had received the contract to build a new Madison Square Garden. Stanford White had designed a Moorish-style building; the tallest tower was modeled on the bell tower of Seville Cathedral , the Giralda . White commissioned his friend, the sculptor Augustus Saint-Gaudens , with a suitable figure for the spire. They agreed on a " Diana ", Roman goddess of the hunt, with a bow and arrow. The sculpture was 18 feet (5.5 m) tall and weighed 1,800 pounds (816.5 kg). It was meant to be a weather vane and was supposed to turn, but it didn't. In addition, the architect and artist found that it was too big for the tower. In September 1892 this Diana was removed and taken to Chicago, where she adorned the dome of the agricultural building of the 1893 World's Columbian Exposition .

The second Diana, also known as "Diana on the Tower," was scaled to 13 feet (3.96 m) and made in lightweight hammered copper sheet and gilded. Her athletic figure was a perfect addition to a place where sporting events, as well as other types of entertainment, were held. During the "Gilded Age" of New York City, when it was scandalous for a lady to show her ankles in public, this nude Diana was quite shocking and was the talk of the town. With a total tower height of 347 feet (105.8 meters), it became the highest point in New York City, taller than the Statue of Liberty. Diana was the first statue to be electrically lit at night. With its gold-plated, sleek shape, it shone in the sun during the day and could be seen along the Hudson River and in New Jersey .

The location of the successor building moved further north, towards the west side. The groundbreaking for the construction of the MSG III took place on January 9, 1925 on Eighth Avenue (Manhattan) between 49th and 50th Street. It was designed by the theater architect Thomas W. Lamb ; the construction cost was $ 4.75 million. The building was constructed in 249 days by boxing promoter Rickard and "The House did Southwestern built" ( The house that Tex has built called). The arena was 200 × 375 feet (61 × 114 m), with seating in three tiers and a maximum capacity of 18,496 for boxing events.

The current MSG building was erected from 1963 over the tracks of the Pennsylvania Station , whose “ Beaux-Arts ” -style building, designed by the architects McKim, Mead, and White , was demolished in 1964 for this purpose. Today the complex consists of a congress center, cinema, theater and sports field.

In July 2013, the New York City Council, as the owner, voted for a final ten-year extension of the lease with the operators. During this time, Madison Square Garden has to move again in order to enable the modernization of the Pennsylvania Station below the stadium for the period thereafter.

Both the New York Knicks basketball team and the New York Rangers ice hockey team play their home games at the MSG . The MSG offers 19,763 spectators for Knicks games and 18,200 spectators for ice hockey games. In 1971 and 1974 the first two fights between boxing legends Muhammad Ali and Joe Frazier took place there.

In 1891 a six-day race took place in Madison Square Garden for the first time . Initially, these races only featured individual drivers - usually male professional drivers - who drove around a cycling track for twelve hours a day from Monday to Saturday . Because of the Sunday rest, the races were limited to six days. Whoever had completed the most miles in that time was the winner. In the first race in the Garden, this was US American Bill “Plugger” Martin with 1,466.7 miles driven. In the following years, a six-day race for individual rides took place in the Garden every year.

The garden with the cycling track in 1907

The following year, the President of the New York Board of Health , Michael C. Murphy, tried to prevent the race because it was "an animal event that no white man should watch" and in which the athletes are subjected to inhumane efforts be. The doctor who examined the driver Charles Miller, who was born in Germany as Karl Müller, after his victory in the previous year, assured him that he was in good physical condition. However, his lead over the other drivers is said to have been so great that he was able to treat himself to several hours of sleep in between. The 1898 race went as planned, and Miller won again.

Six-day races with individual drivers have proven to be increasingly unattractive for spectators over the years. In order to create publicity, the organizers of the New Yorker 1898 spread in the press that drivers had gone insane because of the inhuman exertion. The audience wanted to get their own picture, so Madison Square Garden was well attended the next day. In the long run, however, there was no way to inspire the audience in the individual competition. The following year, concerns about the solo six-day race were taken seriously, and the authorities decreed that a driver was only allowed to drive twelve hours a day; The solution was teams of two, with the condition that one of the two drivers must always be on the cycling track .

The first six-day race with teams of two was won by Charles Miller, together with Frank Waller , a native of Munich . Since the races with two-man teams were held for the first time in Madison Square Garden , the track cycling discipline two-man team riding has also been called Madison or Americaine since then . 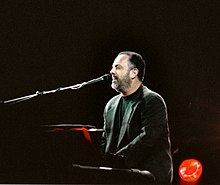 The annual six-day race in the Garden was a popular social event: "[...] where men and women, rich and poor, black and white rubbed elbows, listened to the latest jazz bands and songwriters, and screamed encouragment to their heroes". Between 1899 and 1961, 70 six-day races were held in Madison Square Garden.

Concerts and other events

Many well-known musicians appeared in the MSG; most commonly Billy Joel , who has performed here more than 110 times. In 2010 the German music band Rammstein performed here. At concerts, the garden can accommodate up to 20,000 spectators.

Every February, the MSG hosts the Westminster Kennel Club Dog Show , the oldest dog show in the world. The garden is also rented out for business and private celebrations; In 2004 it hosted the Republican Congress .

Occasionally Madison Square Garden is used as a location for films; In Godzilla , the giant lizard lays its eggs here, which is why the MSG is destroyed by two rockets in the film.