Safin began his tennis career in 1997 and narrowly missed the top of the world rankings at the end of the year in the 2000 season after leading the world rankings for nine weeks during the season . Safin has won 15 singles tournaments in his career, including the 2005 Australian Open and the 2000 US Open . At the end of the 2009 season he ended his career after losing connection to the top of the world due to several injuries.

Marat Safin's mother Rausa Mohamedjhanowna Islanowa was a former top ten player in Russia, his father Mikhail Alexejewitsch Safin (Mubin Aliamtschewitsch) ran a tennis club in Moscow, in which, in addition to Safin, later stars like Anna Kurnikova , Jelena Dementjewa and Anastassija Myskina trained. His younger sister Dinara Safina , also a professional tennis player, was number 1 in the WTA world rankings for 20 weeks from April 2009 . At the age of 14 he moved to the Spanish Valencia , as the training opportunities in Russia were no longer sufficient.

In 1997 he appeared for the first time in the ATP men's tour and lost at the Kremlin Cup in Moscow in the first round against the Dane Kenneth Carlsen . In 1998 he attracted general attention when he defeated Andre Agassi and Gustavo Kuerten in five sets each at the French Open. In 2000 he won his first Grand Slam tournament at the US Open . He defeated the four-time US Open winner Pete Sampras in 3 sets with 6: 4, 6: 3 and 6: 3. Tennis experts saw in Safin a new star in the tennis sky that would dominate the tennis world for the next few years. But a series of poor concentration and unstable games, which were blamed on his unpredictable temper outbursts, refuted this prognosis. In addition, he sustained several injuries that affected his game so much that he was sidelined for most of the 2003 season. 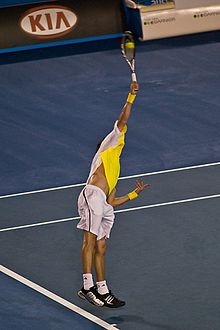 After triumphing at the Australian Open in 2005, Safin attributed his victory and consistent performance to his new coach Peter Lundgren , who was Federer's coach until 2003. The following tournaments were not very successful, followed by many early defeats up to the French Open . In June 2005 he was still in the Wimbledon preparatory tournament in Halle in the final, where he was defeated by Federer.

Safin was popular with both fans and commentators. He was notorious for smashed thugs, and in 2004 he dropped his pants at Roland Garros after beating Félix Mantilla in the second round . His behavior and the support of his predominantly female fans made Safin a player who was able to breathe new life into a sport that had lost its popularity.

In 2002, Marat Safin, along with Yevgeny Kafelnikow , Michail Juschny , Andrei Stoljarow and team captain Shamil Tarpishchev, helped Russia achieve its first Davis Cup victory when they defeated France 3-2 in the final round in Paris.

Although a serious knee injury threw him far back in the rankings (he missed the 2005 US Open and 2006 Australian Open) and undermined Safin's progress, he returned to the tour in 2006 and played the Masters tournaments in Indian Wells, Miami, Monte Carlo, Rome and Hamburg. While his lack of success showed that a full return to his former state would take some time, it did prove that he is still one of the most feared hard court players. In front of the French audience at the Davis Cup final against Richard Gasquet , he showed that he can control his temperament and showed mental strength, brought his basic strokes into the field, placed 33 aces and finally won after 3 hours 45 minutes. On August 17, 2006, Safin temporarily separated from his coach Peter Lundgren after a disappointing year .

At the US Open 2006 Safin played like in the old days, when he beat the fourth seeded David Nalbandian in five sets in the second round match and again showed unusual calm and mental strength. In the fourth round he failed against the former world number two Tommy Haas , also in five sets. Safin's current form improvement continued, first in the 3-2 win against the USA in the Davis Cup and then with a good start to the indoor season at the Thailand Open, where he lost to eventual winner James Blake in the semifinals.

As the grand finale of 2006, Safin competed in the Davis Cup 2006 against Argentina together with Nikolai Dawydenko , Dmitri Tursunow and Michail Juschny . In front of their home crowd, the Russian team won 3-2 and secured their second Davis Cup victory after 2002. 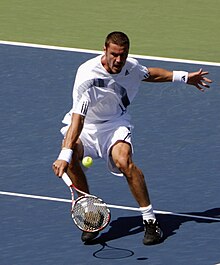 After a relatively good 2006 season, Safin was back in the top 30, as he was temporarily eliminated from important tournaments due to his injuries and his weak performance.

In 2007 he was ranked 24th and was traded as a secret favorite at the 2007 Australian Open . He convinced in his first and second round matches, but then lost in the third round against Andy Roddick, who was third . His improvement in form was only to last for a short time, in Las Vegas he showed mental strength and made it to the semi-finals, where he clearly lost 7: 5 and 6: 1 against the eventual winner Lleyton Hewitt. At the Masters tournaments he was eliminated early. In Monte Carlo he defeated the Belgian Kristof Viegen 6-0 in the first set, but lost the second and third set after a clear lead. Further defeats followed very early in Miami, Indian Wells and Rome.

At the end of the 2009 season after the Masters in Paris , he ended his professional career. In 2016 he was inducted into the International Tennis Hall of Fame .

In the parliamentary elections in Russia in 2011 , Safin was elected to the Duma for United Russia , the party of Vladimir Putin , as a member of the Duma for the constituency of Nizhny Novgorod . In 2017 he gave up his mandate.