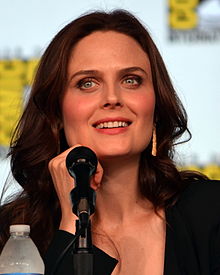 Deschanel is the daughter of the American- French cameraman Caleb Deschanel and the Irish-American actress Mary Jo Deschanel . Her younger sister Zooey is an actress and member of the band She & Him . Deschanel became a vegetarian at 16 , later a vegan , after watching a documentary about the meat and dairy industry at school.

Deschanel studied acting at Boston University . She made her film debut in 1994 with a minor supporting role in the film $ 2 Million Tip with Nicolas Cage and Bridget Fonda . She then made several guest appearances on television series such as Crossing Jordan - Pathologist with Profile and Law & Order: Special Victims Unit . In 2005 she took on the female lead, a forensic anthropologist, in the crime series Bones , which was filmed based on the motifs of US bestselling author Kathy Reichs . She was voiced by Ranja Bonalana . In episode 5x10 ( What's Left of the Christmas Man ), her sister Zooey has a guest appearance and plays her cousin. The series ended in 2017. 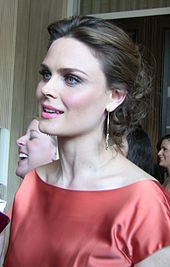