Her game was characterized by powerful and well-placed basic strokes as well as her excellent serve  - with her size of 1.89 m she has perfect leverage. At the tournament in Tokyo in 1999, for example, Davenport managed the feat of not giving up a single point in her own service in her round of 16 match against Anna Smaschnowa. Due to her size, Davenport did not always move optimally and did not always stand very well with the ball, which she tried to improve through weight loss and hard training. Mentally she was also considered to be very resilient.

In 2003 she married the banker and former athlete Jon Leach, the brother and brief coach of tennis professional Rick Leach . The wedding gave a new boost to the career and so Davenport won seven tournaments in 2004 and put up an impressive streak of four titles in five weeks. As a result, she was considered a big favorite for the US Open title . As so often, however, she was stopped in the semifinals by an injury, she had to give way to the eventual tournament winner Svetlana Kuznetsova . Nevertheless, at the end of the year she replaced Amélie Mauresmo as number 1.

At the first Grand Slam tournament of the year, the Australian Open, she reached the final again, but had to admit defeat to Serena Williams in three sets. She won two other titles in Dubai and Amelia Island and was also in the final in Tokyo and Indian Wells . In the latter tournament she achieved a spectacular semi-final victory against Marija Sharapova , which she dealt 6-0 and 6-0. She then lost the final in three sets against Kim Clijsters. At the French Open , she made it to the quarter-finals on the less popular clay court, in which she failed against the eventual finalist Mary Pierce .

At the tournament in Wimbledon Davenport defeated Kim Clijsters, Swetlana Kuznetsova and Amélie Mauresmo, among others. In the final, as so often, she had to admit defeat to Venus Williams (remake of the 2001 final). In a dramatic game she lost to her compatriot 6: 4, 6: 7 and 7: 9. With a duration of two hours and 44 minutes, it was the longest women's final in Wimbledon history. Because of a back injury, Davenport had to cancel his participation in the Fed Cup . After a short break, she wanted to defend her title at the Stanford tournament , but had to break off her second round game against Anna-Lena Grönefeld when the score was 0: 5 because of the back pain that had persisted since Wimbledon.

In an interview she said, “I knew it was going to be a tough day. I did everything I could. The pain comes and goes. I get permission to train, to play, and then it flares up again. ”Davenport said she wanted to get fit before the US Open - even though she had to cancel two tournaments in which she would have played as the defending champion. This meant that she had to surrender the lead in the world rankings to Maria Sharapova on August 22, 2005, which she recaptured a week later by winning a tournament in New Haven. Davenport had to bury his hopes for a win at the US Open in the quarterfinals. Many mistakes brought her opponent Jelena Dementjewa to the semi-finals. After the US Open, she lost the top position again to Sharapova. In Bali she defeated Francesca Schiavone in the final. She won her 50th individual title two weeks later in Filderstadt, where Amélie Mauresmo once again had nothing to counter the strong service from Davenport. After 2001 and 2004, this was her third success at the gates of Stuttgart.

On the way to the season finale, Davenport stopped at the Zurich Open . She had already started there five times and reached the finals five times. She won the tournament three times (1997, 1998 and 2001), only in 2000 (against Hingis) and 2002 (against Schnyder) did she lose out. By winning the last 16 over Daniela Hantuchová , she paved the way for her eighth title win. However, she had to fend off two match points in the 3: 6, 7: 5, 6: 2 success in the second set. In the quarter-finals against Schiavone, Davenport had to go the full distance again (6: 4, 4: 6, 6: 4), but she dominated the semi-final against Anastassija Myskina at will (6: 0, 6: 4). In the final, the 2002 final was reissued; she showed strong nerves in some tight situations and defeated Patty Schnyder 7: 6, 6: 3. 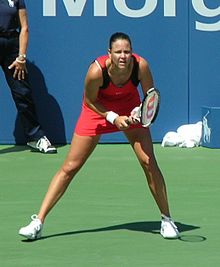 In 2006 Davenport could not achieve the very big successes. At the invitation tournament in Hong Kong she reached the final (defeat against Clijsters) after victories over Nicole Vaidišová and Venus Williams, at the Australian Open, however, she was already defeated in the quarter-finals by later finalist Justine Henin. In Dubai she failed in the semifinals as defending champion to Sharapova. There she celebrated her 700th victory with a 6: 0, 6: 0 over Jelena Lichowzewa . Davenport started the tournament in Indian Wells again with a 6-0, 6-0 against Ashley Harkleroad. In the quarter-finals, weakened by an injury, she failed against her long-term rival Martina Hingis.

Davenport planned no more than 15 tournaments for 2006, which inevitably brought about a slide in the world rankings. As long as she sees herself as a contender for big titles, she will play. The European clay court season 2006, including the French Open, was then completely canceled. Due to a back injury, she was unable to play a tournament from March. She also canceled Wimbledon on June 19, 2006, for which she wanted to prepare optimally. In August, she returned to the tour at the Los Angeles tournament, but was narrowly defeated by the then doubles specialist Samantha Stosur in her opening match . Two weeks later Davenport defeated world number one Mauresmo in the quarterfinals at the tournament in New Haven in two sets and reached the final against Justine Henin, which she had to give up at 0: 6, 0: 1 due to shoulder problems. Despite her injury, she got off to a good start in the US Open and fought her way to the quarterfinals, defending two match points against Katarina Srebotnik in round three and then defeating Patty Schnyder in two close sets. In the round of the top eight she met Henin again, against whom she again lost out.

Davenport was described as being very polite off the tennis court too; she was popular in gaming circles and had a "good relationship" with the press.

On December 13, 2006, Davenport announced that she and her husband were expecting their first child. On June 10, 2007, she gave birth to Jagger Jonathan. With the words “I can't imagine playing tennis again” she announced her retirement from the tennis circus after 13 years.

In July, she revised her decision to end her career. The first stop on her comeback was the New Haven tournament at the end of August, where she played doubles alongside Lisa Raymond . However, the two failed in the first round against the world ranked double Cara Black and Liezel Huber .

She made her comeback in the individual competition in mid-September at the WTA tournament in Bali, which she won straight away. Among other things, she defeated Jelena Janković , number 3 in the world, 6: 4, 2: 6, 6: 2. In the final she defeated Daniela Hantuchová 6: 4, 3: 6, 6: 2. A week later, Davenport reached the semifinals in Beijing, where they narrowly lost to Janković. At the end of the year, she played her third tournament since her comeback. Davenport served like in their best times, even played a service game with four aces in a row against Julija Wakulenko and secured her 53rd WTA title. She had played back to the top of the world.

She started the new season with a tournament victory in Auckland. With her first round victory at the Australian Open on January 14, 2008, she crowned herself the best-earning female athlete in the world with $ 21,897,501 in prize money and surpassed Steffi Graf's 1999 record . In her sixth tournament since her comeback in Memphis, she won her fourth title and also won doubles with Lisa Raymond. In Indian Wells she swept top ten player Marion Bartoli from the field, but had to give up in the quarterfinals against Janković due to an injury. With a fantastic performance, she defeated world number two Ana Ivanović surprisingly smoothly in Miami , but just as unexpectedly failed one lap later to Dinara Safina. At her first clay court tournament since 2005 in Amelia Island , she reached the semi-finals, which she had to cancel due to illness.

After this cancellation in April, she only played two singles tournaments in 2008. At Wimbledon she gave up in round two, at the US Open she lost to Marion Bartoli in the third round. Thanks to her good results at the beginning of the year, Davenport was ranked 35th in the world at the end of the year.

Speculations about a career end gave Davenport in December 2008 initially a rejection and announced their acceptance for the Australian Open . But just a week after the statement, the cancellation followed. Davenport was expecting their second child, daughter Lauren Andrus was born on June 27, 2009.

Davenport eliminated with Bob Bryan in Wimbledon in the second round, but won shortly afterwards on the side of the world number three in doubles, Liezel Huber, the Stanford WTA tournament with 7: 5, 6: 7 8 , [10: 8] against the pairing of Chan Yung-jan / Zheng Jie . It was Davenport's last title win.

Note : These statistics take into account all results individually, as stated on the WTA page. Only Category I WTA tournaments are shown .

On July 12, 2014, Lindsay Davenport was inducted into the International Tennis Hall of Fame .