Suzanne Rachel Flore Lenglen (born May 24, 1899 in Paris , † July 4, 1938 there ) was a French tennis player . It dominated women's tennis in the early and mid-1920s. Her graceful style of play and her extraordinary appearance made her one of the first world stars in sport. Between 1919 and 1926 she won 25 Grand Slam titles .

A balance sheet of their successes

Lenglen won a total of 25 titles in the later Grand Slam tournaments . However, the French championships were not opened to international participants until 1925. By this time Lenglen had already won four wins there.

Lenglen was the first player to succeed in 1920 to win the title in all three competitions (singles, doubles and mixed ) at the International English Tennis Championships in Wimbledon . She was even able to repeat this success twice, in 1922 and 1925.

Lenglen was also successful at the Olympic Games in Antwerp in 1920 , where she won two gold medals (in singles and in mixed ) and one bronze medal (doubles) for her country .

In singles, the Frenchwoman won a total of 81 titles, no less than seven of them without a game loss, plus 73 titles in doubles and eight in mixed.

She was only called "the Divine" by fans and the press and was also ten times hard court world champion (four times in singles and three times in doubles and mixed ), was only 39 years old. She died of leukemia . 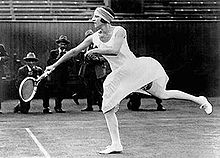 Her appearance, which was scandalous for the time, was also legendary. Lenglen often entered the square with an open fur coat. "The Divine" also completed her games with a daring cleavage , uncovered arms and white stockings without a petticoat. Even so, Lenglen was never evicted. Although she never played an official tournament in the Stade Roland Garros , which was only completed in 1928 , not only the trophy for the winner of the French Open women's singles bears her name today; The second largest stadium in the Roland Garros facility is also named after the Frenchwoman.

Suzanne Lenglen is considered one of the best players of all time.

Suzanne Lenglen was born in Paris as the daughter of Charles and Anaïs Suzanne Lenglen. In her childhood and adolescence, she suffered from chronic asthma and a variety of health problems. The father - a rather wealthy haulier - had decided to strengthen his daughter's ailing health through intense exercise. The opportunity arose on the family's tennis court on their property in Marest-sur-Matz. In 1910 the little eleven-year-old reached for a tennis racket for the first time. Impressed by his daughter's growing enthusiasm and talent, Charles Lenglen set the goals higher and began something like consistent training, one of the exercises being hitting a glove lying on the field.

Just four years after the first attempts, Suzanne was in the final of the French Championships in 1914. The tournament - the forerunner of the later French Open - was only available to members of French tennis clubs at that time and until 1925. The 14-year-old lost to defending champion Marguerite Broquedis in three sets with 7: 5, 4: 6 and 3: 6. But in the same year she won the International Clay Court Championships in Saint-Claude (she turned 15 during the tournament). The outbreak of the First World War stopped the young French woman's hopeful career - for the time being.

In contrast to the French Championships, which did not take place again until 1920, the Open English Championships in Wimbledon were held again in 1919. Lenglen, who played on grass for the first time, reached the final straight away and faced seven-time winner Dorothea Douglass Chambers. Both fought a thrilling duel that went down as one of the most dramatic finals in tennis history. Lenglen just won in three sets 10: 8, 4: 6 and 9: 7 and secured her first Grand Slam title at the age of 21 . But not only the extraordinary quality of the young Frenchwoman's game became the talk of the day. Her clothes also caused a stir; In contrast to her traditionally completely veiled opponents, she left her forearms and calves almost uncovered - a scandal for the time. The British public was not only shocked by the Frenchwoman's revealing demeanor. Rather, you noticed with a murmur that she was refreshing herself with brandy in sips as she changed sides.

At the Olympic Games in Antwerp in 1920 Lenglen dominated the women's individual competition. On her way to the gold medal, she only lost three games - all in the final against the British Dorothy Holman . In addition, she secured another gold medal in mixed doubles with her compatriot Max Decugis and also won bronze in women's doubles.

From 1919 to 1925, Suzanne Lenglen won all Wimbledon titles in singles. Only in 1924 did she have to give up after the fourth round due to asthmatic problems. From 1920 to 1926 she also triumphed at the French championships, which were opened to foreign players in 1925.

Lenglen's only real defeat in a match during this time occurred during an unplanned appearance at the 1921 US Open . Lenglen had decided to use her popularity to raise money for the rebuilding of war-torn French areas. For this she planned to play some exhibition matches in the USA against the Norwegian-born US Open winner Molla Bjurstedt-Mallory . During the long crossing at sea, the French woman suffered from severe seasickness and asthmatic cough. When Lenglen arrived in New York, she was amazed to learn that the organizers of the US Open - without ever having obtained their consent - had announced their participation. Although the French woman was already suffering from increasingly violent coughs at this point, she bowed to the pressure of the enthusiastic and expectant American public. Surprisingly, there was no seed list so that Lenglen met defending champion Bjurstedt-Mallory in the opening game. Lenglen lost the first set 2-6 and was shaken by such severe coughing fits at the beginning of the second half that she had to give up. Her departure became a veritable gauntlet. The disappointed audience mocked the Frenchwoman, and the American press was also full of criticism. A doctor later found that Lenglen had whooping cough. The French woman canceled all exhibition matches. Lenglen, revered in Europe as "The Divine", returned to Europe dejected in the face of these experiences.

After her recovery, the French woman thought about making amends. In the Wimbledon final of the following year, Lenglen met Bjurstedt-Mallory again and knocked them 6: 2, 6: 0 off the pitch in 26 minutes. A few months later both met again at a tournament in Nice . Mallory didn't win a single game.

The last year as an amateur player

In her final year as a player with the amateurs, the French, who was already a living legend, made her biggest appearance on a tennis court. In February 1926 she met the American Helen Wills Moody for the first and only time at the Carlton Club in Cannes , who at the age of 20 was seven years younger than Lenglen. Wills was already a two-time US Open winner and would dominate the late 1920s and early 1930s as Lenglen had done since 1919.

The public's interest in the coming together of the past and future of women's tennis was indescribable and drove admission prices to unprecedented heights. The enthusiasm was so great that even the roofs and windows of the buildings surrounding the tennis court were full of onlookers. The past triumphed once again over the future: Lenglen won 6: 3 and 8: 6, although she was close to a circulatory collapse several times.

A few weeks later, Lenglen appeared to be on course for her seventh title at Wimbledon. But the British Queen, Queen Mary , waited in vain in the Royal Box for the French tennis queen to appear. Lenglen, mistakenly believing her game had been postponed to a later date, felt close to collapse in the face of the unintentional incident, which British monarchists and the tournament management took as an insult to their queen. She withdrew her participation in the tournament and never came back to the "sacred lawn" on Church Road.

Further sporting career as a professional player and last years

Lenglen was the first major female tennis star to switch to the pros. For a series of exhibition fights in the USA against Mary K. Browne, winner of the US Open from 1912 to 1914, the Frenchwoman received the sum of 75,000 US dollars, which was sensational at the time. Her American opponent was 35 years old and a finalist in the French Open, where she lost 6-1 and 6-0 to Lenglen.

For the first time in the history of tennis, a women's match dominated the headlines. When they first met in New York, the Frenchwoman played so brilliantly that the reporter for the New York Times spoke of one of the best games that had ever taken place on an American court. When the series of exhibition fights ended in February 1927, Lenglen had won all 38 games against Browne. The French woman was exhausted and received medical advice to keep away from tennis for a long time in order to recover.

Lenglen decided to withdraw completely from competitive sports and, with the help and financial support of her partner Jean Tillier, founded a tennis school in Paris - in the immediate vicinity of the Roland Garros courts, the venue for the French Open. Soon - in 1936 - the academy was transformed into the training center of the French Tennis Federation. At that time Lenglen also wrote several books about her sport. In Paris, Lenglen was responsible for sportswear for a model house.

At the beginning of July 1938, Paris daily newspapers reported Lenglen's sudden fatigue. A few days later, on July 4, 1938 at 6:30 a.m., she died of complications from pernicious anemia in her home in Paris. Lenglen was buried on July 6, 1938 on the Cimetière parisien de Saint-Ouen near Paris.