Birthplace in Schwarzenberg with a memorial plaque 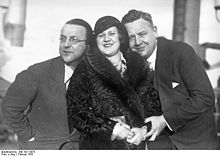 Elisabeth Rethberg , nee Lisabeth Sättler , (born September 22, 1894 in Schwarzenberg / Erzgeb. , † June 6, 1976 in Yorktown Heights , New York ) was a German opera singer ( soprano ). She was considered to be the best “Aida” of her time and in 1929 Arturo Toscanini called her the “greatest living soprano”.

Rethberg was born as the daughter of the Schwarzenberg select school teacher Karl Gustav Sättler from Rittersgrün and his wife Johanna Emanuela geb. Müller from Gröba near Riesa was born. They had initially lived in the house at Schwarzenberger Schloßstraße No. 10, where the Heimatlied poet Johanne Amalie von Elterlein died in 1865 and the children Karl (1881) and Hertha (1883) were born, and then they moved into a building belonging to the former Schwarzenberger Kugelhammers in Obergasse. After Hans (1885) and Käthe (1888), who both later lived in the USA, Elisabeth was born on September 22, 1894 and baptized in the house on October 30 of that year. Respected men appeared as godparents: the factory owners Matthias Kalb from Schwarzenberg and Paul Lein from Pirna , Guido Sternkopf, owner of a cutting mill and an inn in Rittersgrün, and the brothers Woldemar and Richard Schneider, merchant in Schönheide and senior teacher in Raschau .

Elisabeth began playing the piano at the age of five and received irregular lessons from her busy father. After her confirmation in 1909 in the Schwarzenberg St. Georgen Church , she increasingly pursued her musical inclinations. In 1911, accompanied by her sister Käthe on the piano, she performed at a public concert with songs by Franz Liszt , whereupon she was celebrated by the local press. On the advice of her godfather Richard Schneider, she registered at the Royal Conservatory in Dresden at Easter 1912 , where she studied until autumn 1913. A subsequent private study with Otto Watrin, a student of August Iffert , was interrupted at the beginning of the First World War. Elisabeth was now self-taught and received a dramatic training at the Petrenz Opera School in Dresden ; here she was engaged at the court opera in 1915 and took the stage name "Elisabeth Rethberg".

After the death of Elisabeth's mother in 1914, her father, who has since retired, moved in 1915 with her sister Käthe to Franklinstrasse 32 in Dresden to live near his youngest daughter. Elisabeth developed into an artist who mastered opera, oratorio and song well and played more than 100 roles during her time in Dresden, including one of the noble boys in Lohengrin , Agathe, the Figaro Countess, Pamina, Konstanze, Aida , Mimi, Sophie , Eva and Elsa. It appeared increasingly in other large German cities, abroad and in the eastern and western theaters of war. In 1922 she was seen as Countess Almaviva at one of the first opera performances at the Salzburg Festival . In the same year she reached a high point in her career when she was engaged for five years at the Metropolitan Opera in New York . During the summer months she performed for the Ravinia Park Opera Company in Chicago. From 1928 to 1940 she also performed regularly in San Francisco . She traveled to Europe for annual guest performances and sang a. a. In 1928 the title role in the world premiere of Richard Strauss' "Ägyptische Helena" in Dresden. In 1939 she had her last appearance at the Salzburg Festival; she was seen in the Rosenkavalier as Donna Anna and as Field Marshal.

Rethberg married the industrialist Albert Doman in 1920, who had two children from a previous marriage and lived with her in the USA until 1937. Her second marriage in 1957 was the St. Petersburg- born baritone George Cehanovsky (1892–1986) who, like her, was engaged at the Metropolitan Opera. In 1942 she said goodbye to the stage; she died on June 6, 1976 at the age of 81 in Yorktown Heights, New York, of Alzheimer's disease .