Witherspoon lived in Wiesbaden for four years as a toddler ; her father John was stationed there with the US Air Force as a military doctor with the rank of Lieutenant Colonel . After returning to the United States, she grew up in Nashville . Her mother, Mary Elisabeth (nee Reese), nicknamed Betty, is a professor of nursing at Vanderbilt University . Reese Witherspoon has a brother three years her junior named John Draper. Her parents have lived separately since 1996. Witherspoon has stated that she is a direct descendant of John Witherspoon , who was born in Scotland and immigrated to the United States and was one of the signatories of the US Declaration of Independence . Their ancestry has not been confirmed by genealogists, who focus exclusively on the descendants of the signatories of the American Declaration of Independence.

At the age of seven, Witherspoon was hired to work for a florist's commercials. After graduating from Harpeth Hall School, a private girls' high school in Nashville, she began studying English literature at Stanford University , which she abandoned in order to pursue an acting career.

In 1991, at the age of 14, she played her first film role in The Man in the Moon at the side of Jason London , for which she was nominated for the Young Artist Award in the category Best Young Actress Starring in a Motion Picture . In 1996 she played the leading role in the thriller Fear - when love is scary at the side of Mark Wahlberg . In the same year she turned down the lead role in Wes Cravens Scream! which was then cast with Neve Campbell . In 1998 Paul Newman discovered Witherspoon for his thriller In Twilight . She became better known in 1998 alongside Tobey Maguire in the comedy Pleasantville - Too Good to Be True , which was a success with both critics and audiences. In 1999, Witherspoon was nominated for a Golden Globe for the first time for the film Election for best actress in a comedy . In the year it celebrated another success with the drama Cruel Intentions alongside Sarah Michelle Gellar and her future husband Ryan Phillippe .

In 2001 she made her final breakthrough with the lead role of Elle Woods in the comedy Naturally Blond . The film was an international box office hit, and Witherspoon received good reviews and a second Golden Globe nomination. In 2003 she was able to build on this success with the sequel Naturally Blond 2 . In 2002 she starred alongside Patrick Dempsey in the equally successful romantic comedy Sweet Home Alabama . At the same time, she founded her own production company Type A Films , so that she also acted as a producer for the films Naturally Blond 2 and Penelope (2006). 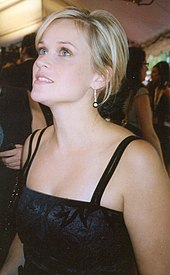 Witherspoon played her most important role to date in James Mangold's drama Walk the Line in 2005 . In the biography about the American country singer Johnny Cash , she played his second wife June Carter Cash and sang four songs for the film herself. She has received critical acclaim for her performance and has received numerous film awards, including the Golden Globe for best leading actress in a comedy / musical and the Oscar for best leading actress. In her following film, As long as you are there , Witherspoon shone again as a comedy actress who, with the help of Mark Ruffalo, tries to find out her true identity.

In the thriller Powerless (2007) Witherspoon was seen at the side of her future partner Jake Gyllenhaal . In the comedy My Sweetheart, Our Family and I (2008), she played alongside Vince Vaughn, among others . Witherspoon is also one of the highest paid actresses in Hollywood. In October 2005, she ranked third on the list of highest salaries behind Julia Roberts (US $ 20 million) and Nicole Kidman (US $ 16 million) with an income of US $ 15 million per film role. In 2007 she secured first place ahead of Angelina Jolie and Cameron Diaz with a fee of 15 to 20 million US dollars . In a Forbes ranking published in July 2008, she was ranked fourth behind Cameron Diaz, Keira Knightley and Jennifer Aniston with an income of $ 25 million (between June 2007 and June 2008) .

In 2010, she stood alongside Paul Rudd , Owen Wilson and Jack Nicholson in the comedy How Do You Know It's Love in Front of the Camera. She played the role of Lisa , a former softball player who has to choose between two men. The film was released in American cinemas in December 2010. Witherspoon received the 2,425th star on the Hollywood Walk of Fame on December 1, 2010 .

In 2015 she received her second Oscar nomination for best actress for the role of Cheryl Strayed in The Big Trip - Wild (2014), in this category she was also nominated for a Golden Globe and the Screen Actors Guild Award .

From 2007 to December 2009 she lived with her colleague Jake Gyllenhaal , whom she met while filming the film Machtlos .

In September 2012, she gave birth to her third child, a son.

Reese Witherspoon has been dubbed most often by Manja Doering . Doering spoke her in The Man in the Moon , Fear , In the Twilight , Pleasantville , Election , Naturally Blonde 1 and 2 , As Long as You're There , Powerless and Water for the Elephants . She is voiced by Ranja Bonalana in many of her recent films (Vanity Fair , Walk the Line and Penelope) . Her other German voices included Marie Bierstedt (Eiskalte Engel) , Dascha Lehmann (American Psycho) and Claudia Lössl (Sweet Home Alabama - love in a roundabout way) . 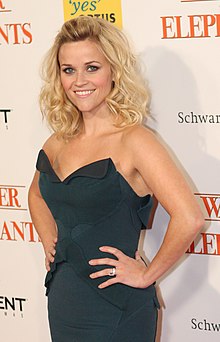