The title of this article is ambiguous. Further meanings are listed under Prion (disambiguation) .

Prions are proteins that can exist in the animal organism in both physiological (normal) and pathogenic (health-damaging) conformations (structures). They do not multiply through division, but through induced changes in neighboring molecules.

The English name prion was proposed in 1982 by Stanley Prusiner , who received the Nobel Prize in 1997 for the discovery of prions . It is a portmanteau derived from the words pr otein and infect ion and refers to the ability of prions to transfer their conformation to other prions. So it is not about living beings, but about organic toxins (poisons) with infectious properties.

The body's own prions are increasingly found in brain tissue, so that pathological changes can have serious consequences for the organism. The pathogenic prions are very likely to be responsible for Creutzfeldt-Jakob disease in humans, BSE (mad cow disease) in cattle, or scrapie in sheep . They are most likely to enter the body through contaminated food (e.g. in BSE , chronic wasting disease or kuru ). Other routes of infection such as smear infection could not yet be ruled out. Pathogenic prions can also arise from the spontaneous refolding of endogenous prions (e.g. familial variant of Creutzfeldt-Jakob disease, familial insomnia ).

Even in today's modern medicine, curative treatment of prion diseases is not possible, so that measures are only possible in the context of palliative medicine . All diseases also have in common that they lead to a spongiform (spongy) disintegration of the brain or the vegetative nervous system and are therefore fundamentally fatal. The pathogenic prevalence of diseases caused by prions is generally considered to be extremely low.

Basically, pathogenic prions must be differentiated from other pathogens such as viruses , bacteria or fungi , as they do not contain any DNA or RNA . Not only are they of great scientific and medical interest, but the "BSE crisis" also had a major impact on areas such as agriculture , consumer protection and politics .

The simplified prion hypothesis and peculiarities of prion diseases

One of the many occurring in the animal body protein is PrP C ( Pr ion P rotein c ellular = cellular prion protein). It is found primarily in the nervous system , especially in the brain . The prions differ more or less slightly between the various animal species and possibly also within one animal species. PrP C occurs mainly on the cell surface and protects the cells from divalent copper ions, H 2 O 2 and free radicals . Furthermore, it is assumed that it is one of the first sensors in the cellular defense against reactive oxygen and free radicals and has an impact on the enzymatic breakdown of free radicals.

Apparatus of this normal protein PrP C into contact with a PrP Sc said protein ( Pr ion P rotein Sc therapy; pathogenic form of the prion protein in the form of first at at scrapie was found diseased animals), PrP takes C in the form of PrP Sc on, “it flips over”, it changes its conformation. A chain reaction develops in which more and more PrP C are converted into PrP Sc . Large amounts of PrP Sc are destructive to the brain because they are insoluble and are deposited in the cells. As a result, these cells die; holes appear in the brain and a spongy structure is created. Hence the name of this disease: spongiform encephalopathy, spongy brain disease. Prion diseases are always fatal.

The initiation of the disease can take place in three ways, which is unique among all diseases:

Familial forms of prion diseases can also be transferred in experiments; for example, PrP Sc , which arises in humans due to genetic disposition, can trigger the disease in mice if it has been injected into the brain beforehand.

Prions are very resistant to common disinfection and sterilization processes , which was one of the reasons for the iCJD cases and the BSE crisis. Today there are strict regulations tailored to the difficult inactivation of prions for the sterilization of material that has come into contact with tissue that may contain prion.

The prion hypothesis is now considered to be relatively secure. However, the fact that another factor plays a role besides the PrP Sc cannot yet be definitively ruled out. After the intensive search for viruses, viroids or nucleic acids was unsuccessful at all, there are hardly any scientists who continue to pursue this path. Outsider opinions occasionally circulate in public, such as the organophosphate theory , according to which BSE is related to insecticides, but for which there is no scientific evidence.

Individual prion diseases were described a long time ago ( scrapie , the prion disease of the sheep, 1759 by Johann George Leopoldt ; CJD 1920 by Hans Gerhard Creutzfeldt ) without knowing anything about the cause of these diseases or being able to classify them into a group. After the transferability of scrapie was proven in 1932 and Kuru was first described in 1957 , the similarity of these diseases was established by William J. Hadlow in the late 1950s and Kuru was also experimentally transferred to monkeys. In 1966, Tikvah Alper and co-workers discovered that the pathogen was too small to be a virus and apparently did not contain any nucleic acid. This led to a "protein only" hypothesis for the pathogen, although it remained unclear how such a protein could multiply. Many therefore assumed that lentiviruses were the most likely cause.

The "prion hypothesis" published in 1982 by Stanley Prusiner , who followed the work of Daniel C. Gajdusek , who had already unconsciously discovered a pathogenic prion, was initially received critically in science, as a nucleic acid-free infectious agent was previously inconceivable. In retrospect, however, this hypothesis turned out to be groundbreaking and in 1997 Prusiner was honored with the Nobel Prize for his work in the field of prion research. In the years after the establishment of this hypothesis, indications for the correctness of this hypothesis could be obtained in numerous experiments, but no definitive proof. The BSE epidemic began in Great Britain in 1986 and the first cases of vCJD were described in 1996.

The proof that recombinant prion protein can cause diseases (which fulfills Koch's postulate ) was achieved in 2010.

Politicians tried to make up for their failures in prevention and consumer protection by, among other things, generous spending on prion research. Numerous working groups were set up, centers built and associations founded. Prion research has been intensified and accelerated.

In 2007, doubts arose as to whether the content of pathogenic prions in a tissue correlates in every case with its infectivity .

New research results from the American researcher Susan Lindquist show that prions play an important role in neurogenesis (the development of new nerve cells in the brain).

Structure of the prion protein 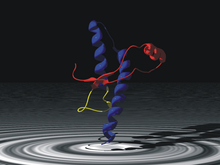 Schematic 3D representation of the structured range of PrP C . The two subdomains of the protein are colored differently; red: leaflet 1, helix 1, leaflet 2; blue: Helix 2 and 3. The basis of the representation is the structure 1QM3 , which was determined by NMR .

The prion protein is a human glycoprotein consisting of 253 amino acids (AA), which is encoded in the prion protein gene (PRNP). The AA homology to other mammals is 85% or more; between cattle and humans there are e.g. B. 13 AS differences. One or more mutations are known that lead to fCJD, GSS or FFI. At codon 129 there is a methionine / valine polymorphism , which is one of the decisive factors for the onset and course of the disease. PrP C contains a large proportion of alpha helices, PrP Sc more beta-sheet structures, but both contain the same primary amino acid sequence .

The exact process of “folding” from PrP C to PrP Sc is still unknown. This changes the properties of the prion protein; the PrP Sc is less water-soluble because the hydrophobic chains do not point to the inside of the protein tertiary structure , as is usual with the α-helix . In addition, PrP Sc is largely resistant to many disinfectants, ionizing and UV radiation and is heat-stable. Moist heat (131 ° C) in autoclaves used for sterilization in medicine only destroys the PrP Sc after two hours, so that medical instruments have to be autoclaved four times in a row; in dry heat, the prion is only inactivated after 60 minutes at 200 ° C difficult to digest due to proteases (proteases can best “cut up” a protein when it is unfolded, but denaturation in the body is less possible due to the changed secondary structure). PrP C is mainly localized at synapses .

According to the latest findings, PrP C play a role in the formation of blood-forming stem cells (see below). Prion protein knockout mice show slower recovery after a stroke, and the mice are also prone to obesity . However, there is evidence of a role as a copper-binding protein at the synapse. According to a publication by US researchers in the journal PNAS , normal prion proteins maintain the regenerative capacity of blood-forming stem cells. In these cells, prions appear in the cell membrane and apparently do not perform any important tasks - at least as long as the body is healthy.

Pathology and symptoms of prion diseases

Prion diseases are primarily characterized by motor disorders such as ataxia and - most noticeably in humans - cognitive problems up to dementia . After an incubation period of years to decades, the diseases are always fatal. The neuropathological examination under the light microscope reveals spongy (spongy) changes in the brain and, depending on the disease, differently pronounced deposits such as amyloids , Kuru plaques and florid plaques.

In Switzerland, the positive laboratory analysis findings to "prion" is for laboratories reporting requirement and that after the Epidemics Act (EpG) in connection with the epidemic Regulation and Annex 3 of the Regulation of EDI on the reporting of observations of communicable diseases of man . This is understood as «positive evidence of PrPSc in clinical material (especially brain)».