This article covers a chemical process. For a heat treatment or coating process in materials technology, see nitriding .

In chemistry, nitration is the introduction of a nitro group (-NO 2 ) into an organic molecule . For historical reasons, nitrates are sometimes referred to as nitro compounds, and glycerol trinitrate as nitroglycerine. However, nitro compounds have a CNO bond, in contrast to nitrates, which have a CON bond. 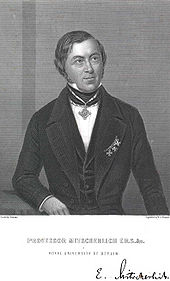 Eilhard Mitscherlich described the first conversion of benzene with fuming nitric acid to nitrobenzene in 1834. The aniline obtained from it by hydrogenation was an important raw material for the pharmaceutical and paint industry. Industrial production of nitrobenzene started as early as 1847, initially in England. In 1863 Julius Wilbrand reported on the nitration of toluene to trinitrotoluene using nitrating acid , a mixture of concentrated nitric and sulfuric acid .

In 1880, Friedrich Konrad Beilstein examined the effect of nitric acid on an aliphatic gasoline fraction and, in addition to oxidation products, also demonstrated the formation of nitro compounds on a small scale. The work on the nitration of aliphatic hydrocarbons was continued in the 1890s by Vladimir Wassiljewitsch Markovnikov and Mikhail Ivanovich Konovalov , but was forgotten until the 1930s.

In the early 1940s , Christoph Grundmann , the discoverer of the Grundmann aldehyde synthesis , succeeded in nitrating higher molecular weight hydrocarbons by nitrating hydrocarbons that were liquid at 160 to 180 ° C using superheated nitric acid vapor. Grundmann also the idea of Drucknitrierung of came cyclohexane by nitrogen dioxide .

The term nitration usually stands synonymously for the nitration of aromatic compounds, which can be characterized as electrophilic aromatic substitution .

Since in the nitrated organic compounds carbon atoms are separated from oxygen atoms by nitrogen atoms, it can happen that the nitrogen atom leaves the bond and the carbon atom reacts violently with the oxygen atom. Therefore some nitrated organic compounds can be used as explosives . Well-known examples are trinitrotoluene (TNT) and picric acid .

Analyzes of the kinetics of the reaction provided a first indication of the presumed mechanism . The following rate equation was found for the reaction:

Here k is a reaction-specific rate constant. This equation makes it clear that, on the one hand, Ar – H (where Ar is any aryl radical) and NO 2 + are involved in the overall reaction rate.

Reaction mechanism for the nitration of benzene

The aromatic ( 1 ) interacts loosely with the nitronium ion, which is referred to as the π complex ( 2a ). This forms the so-called σ-complex , the positive charge of which is delocalized over the ring ( 2b ). The intermediate stages that occur are also known as the Wheland complex . In this process, the aromaticity is canceled. Finally, the sigma complex is deprotonated so that the nitrated aromatic is released ( 3 ).

The technical production of nitromethane takes place through the nitration of methane or through a gas phase nitration of propane , where it is contained in the resulting nitroalkane mixture with about 25%. The nitration takes place in the gas phase either with gaseous nitric acid or nitrogen dioxide at temperatures of around 200 to 400 ° C.

Nitrations can also be carried out with special reagents. Example is the acetyl nitrate , which u. a. CH-acidic compounds such as acetoacetate ester nitrated.