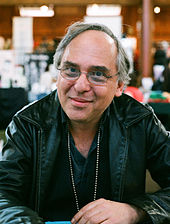 Art Spiegelman (* 15. February 1948 in Stockholm ) is an award-winning American cartoonist and comic - author .

At the age of seven, Art discovered the picture wit of the comic magazine Mad . At the age of twelve he began to be interested in the EC Comics ( Entertaining Comics ) and to trace them. In the course of time he then realized his own ideas, which were soon printed in a school newspaper.

In 1976 he met his future wife, the French architecture student Françoise Mouly, with whom he published the soon-to-be-acclaimed large-format comic avant-garde magazine RAW from 1980 to 1991 . In the magazine, in addition to foreign artists and new American talents such as Charles Burns and Gary Panter, they also published Spiegelman's first major work, Mouse - The Story of a Survivor from Issue Two onwards, his story of his father's memories of the Shoah .

Shortly after the attacks on September 11, 2001 , he quit the famous The New Yorker , for which he had drawn some sensational covers, in protest against the opportunism of the American media for the so-called " War on Terror " of the Bush administration:

“Well, the press is a fearful creature here. It's not that brave. "

“Well, the press is a scary thing here. She is not very brave. "

In 2002, the German weekly newspaper Die Zeit published his ten-part comic series In the Shadow of No Towers ("In the shadow of no towers"). The series describes Spiegelman's processing of September 11th and gives an idea of ​​the trauma that the attack left on Spiegelman. The ten episodes of the series, each consisting of a large-size side and are full of references to comic strips from the early days of the medium, published in the period from 2002 to 2003. In 2004 was published the series as a book.

In June 2006 he dealt with the controversy surrounding the cartoon The Face of Muhammad in a cover story for Harper's Magazine . Art Spiegelman published the comic card series "Garbage Pail Kids" in March 2012 together with John Pound.

Spiegelman has been married to Françoise Mouly, who now works as Art Director at the weekly magazine The New Yorker, since 1977 , and they have children Nadja and Dashiell with her . Today he works as an independent draftsman and author and has lived in SoHo , Manhattan, New York since 1977 .

Lettering of his short story from 1972