Meristem or formation tissue refers to a type of tissue in plants that consists of undifferentiated cells and can be involved in growth through cell division .

The term meristem was first used by Carl Wilhelm von Nägeli (1817-1891) in his book Contributions to Scientific Botany in 1858. It is derived from the ancient Greek words merisein (μερίζειν), which means “to divide” and describes the fundamental empirically perceptible property of the meristeme, and stemma (στέμμα) “binding, bundle”.

Primary meristems are found both in the aboveground part of the plants at the extreme end of the shoot tips (shoot apical meristems) and at the extreme end of the side shoots ( subapical meristems) and in the underground part, at the root tips (root apical meristems ). The cells of the meristems usually have thin cell walls with little cellulose . In contrast to differentiated cell types, they can theoretically divide indefinitely. The growth of plants is generally based on the fact that shoot and root meristems at opposite poles of the plant continuously release cells through cell division to the plant body, which develop into the different organs shoot, root and leaf .

Classification of the meristems

Primary meristems are formed from apical meristems and are responsible for the primary growth of the plant:

The young seedling initially only has a single primary shoot apical meristem, which is found between the two cotyledons in dicotyledonous plants and is created during embryogenesis . This meristem is responsible for the formation of the primary shoot axis through the production of shoot and leaves .

The establishment of further shoot axes takes place through the creation of meristems in the axils of foliage leaves, which are referred to as axillary meristems or lateral meristems. The differently pronounced activity of the axillary meristems is a basis for the diverse growth forms in the plant kingdom. The activity of the axillary meristems is often initially suppressed by the primary shoot apical meristem, so that side shoots develop with a delay. This control by the shoot apical meristem is known as apical dominance . The formation of lateral root meristems does not take place in any anatomically defined area at a certain distance from the primary root meristem. Here is an inner layer of tissue, the pericycle , the origin of these lateral root meristems.

In addition to the secondary meristems in the axils of the leaves and the root tips, the term lateral meristems also refers to the cambium and the phellogen , both cell layers which are active in dividing and which are responsible for the secondary growth of many plants in the outer area of ​​the shoot . 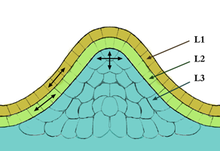 The primary shoot apical meristem of the flowering plants can be divided into different layers and zones:

Another form of classification relates more to the function of the meristem. The actual stem cells are located in the central zone, which divide and release cells for differentiation to the peripheral zone of the meristem. In this peripheral zone, the cells begin to differentiate into the lateral organs such as the leaves. Below the central zone is the rib zone, which mainly contributes to the growth of the shoot.

The sprout apical meristem is theoretically able to continue its division activity almost indefinitely, and this also happens frequently, as for example with trees . However, depending on numerous factors such as external influences, position on the plant or the age of the plant, the shoot meristem terminates just as often by going through various stages of development and finally transforming into a flower meristem that ceases its activity when a flower is produced . The final lateral organs produced by the meristem within this established program are sepals , petals , stamens, and carpels (in that order). Flowers are therefore terminated apical meristems.