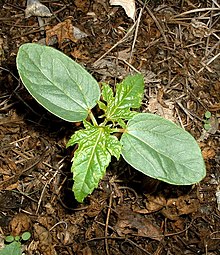 Model of the germination of dicotyledons, Greifswald Botanical Museum

The characteristic that gives it its name is the twofold number of cotyledons, which applies to all representatives with a few exceptions (e.g. some lark spurs with only one cotyledon or degeneria with three to four). The vascular bundles in the shoot axes are designed as Eustele , that is, arranged in a circle. Secondary growth in thickness using the cambium is common.

The roots are mostly long-lived ( allorhizia ) and have an oligarchic vascular bundle. The leaves are varied, mostly they have a distinct petiole and a reticulate vein. They often have stipules , rarely leaf sheaths .

The flowers are usually arranged in five- (four-) whorls, the flower envelope is often differentiated into calyx and crown. Two- or three-digit whorls are rare, as is a helical position. The pollen tetrads are usually formed simultaneously, the pollen grains usually have three furrows (tricolpat). The endosperm is nuclear or cellular, but never typically helobial.

The original and widespread form of life is the tree . Herbaceous forms are considered to be derived.

Chemical characteristics include: frequent occurrence of ellagic acid and ellagitannins , of condensed and hydrolyzable tannins , of essential oils , of triterpenic acids , of polyterpenes (such as rubber ), of alkaloids , triterpene saponins , of calcium oxalate in the form of drusen, and of slime with uronic acid component .

In 1682, John Ray was the first to recognize that not all seed plants have two cotyledons. In 1703 he divided the Bedecktsamer into the two groups Dicotyledones and Monocotyledones. Antoine Laurent de Jussieu took over the structure in 1778 and also used it in his work Genera Plantarum in 1789 . This dichotomy remained until the 1990s when it was recognized that the dicotyledons do not form a natural family group (are not monophyletic ). The basal groups of the flowering plants were separated from the actual "eudicotyledons" and are referred to as single-furrow pollen dicotyledons. The eudicotyledons are monophyletic, while the furrow pollen dicotyledons are still paraphyletic .