The willow family (Salicaceae) are a family in the order of the Malpighia-like (Malpighiales) within the flowering plants (Magnoliopsida).

They are deciduous or evergreen woody plants that grow as trees or shrubs . Some species form clones through root shoots, rhizomes, subsidence or division of the stem axis. The branching is monopodial or sympodial. The upright to hanging stem axes have a bare or downy hairy bark .

In some species there is heterophylly : there are different leaves in the youth and age forms. The mostly alternate and mostly spiral, sometimes two-line, but rarely more or less opposite (for example Salix purpurea ) arranged leaves are usually petiolate. The simple leaf blades have toothed or smooth leaf margins and sometimes glands. Stipules may be present.

All species native to Central Europe and almost all other species of willow family in their original size (Salicaceae s. Str.) Have in common that they are dioecious, separate sexes ( diocesan ), which means that only either female or male flowers are formed on a plant specimen . With the Salicaceae s. st. there are usually many flowers of the same sex grouped together in elongated, racemose or spike-like inflorescences, the so-called catkins , which stand or hang upright. The newly added genera are more often hermaphroditic or, more rarely, monoecious, separate sexes ( monoecious ) and the flowers are not in kitten-shaped inflorescences. If the inflorescences are not catkin-shaped, then they are sometimes bundled or grape-like cymes . There may be inflorescence stems. Flower stalks are present or absent.

The Salicaceae s. st. two- to fourfold (rarely fivefold) capsule fruits that contain four to many seeds, or with the former Flacourtiaceae berries or, more rarely, stone fruits . In the species with capsule fruits, the seeds are spread by the wind and have a basal head of hair.

Branch with leaves of catkin -shaped inflorescences of Chosenia arbutifolia 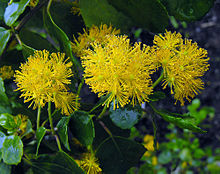 Branch with leaves and inflorescence of Hasseltia floribunda 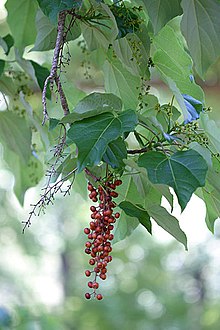 Oncoba spinosa flower with many stamens

Branch with leathery leaves and flowers of Pineda incana 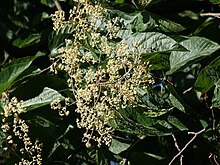 The Salicaceae sl are distributed almost worldwide. They are originally missing in Australia only on the east coast and in New Zealand. Poplar species and willow species occur mainly in the temperate areas of the northern hemisphere in humid locations; they are also found in tundras and in the mountains above the tree line. In North America there are four genera with about 123 species.