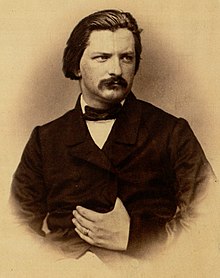 Weber grew up in Bremen , where his father was a high school director.

From 1846 he studied in Bonn medicine and was 1851 to MD PhD . He had a pronounced interest in palaeobotany and published an extensive work on the tertiary flora of the Lower Rhine lignite formation in December 1851, which he and the geographer Philipp Wessel , who died shortly before, had new contributions in December 1855.

After his state examination in Berlin, he went abroad to Paris .

At the end of 1852 he became an assistant doctor at the Surgical Clinic in Bonn with Carl Wilhelm Wutzer , who due to his age and progressive blindness could hardly be a teacher and he continued his self-taught training. He qualified as a professor in surgery in 1853, but was unable to take over the vacant chair in 1855, so he turned to pathological anatomy . He stayed at the Bonn clinic until April 1857. He then became an associate professor for pathology and thus the first specialist in this branch of science. Five years later he was made a full professor of pathological anatomy . In addition, he was director of the surgical department of the evangelical clinic and prosector for the clinics, whereby he is also responsible for the microscopic evaluation of the preparations obtained during the operations.

In 1865 he received the chair of surgery at the University of Heidelberg as the successor to Maximilian von Chelius , where he became director of the surgical clinic.

Weber specialized in pathological anatomy and was a specialist in histology and histogenesis . He was able to prove that fever is a result of blood intoxication. Through his work on tumors he was able to achieve a modification of the Dieffenbach incision for the operation of upper jaw tumors, which is referred to as the Dieffenbach- Weber incision.

At the Surgical University Clinic in Heidelberg he separated the eye clinic from his area of ​​responsibility, handed it over to Hermann Jakob Knapp and initiated the construction of the clinic building in Heidelberg / Bergheim.

During this time he spoke more about the poor hygienic conditions in the hospitals. Diphtheria in particular would significantly influence the operations with the results. This gave rise to his special interest in the treatment of the disease. It is very likely that he was infected during his examinations and fell ill with angina in June 1867, which in the course of the disease indicated diphtheria.

Weber died of diphtheria at the age of 40. He was dissected by his friend Julius Arnold , who, in addition to diphtheria, also found degeneration of the heart, possibly caused by a scarlet fever disease in 1850.

He had been married since 1858 and had one son.