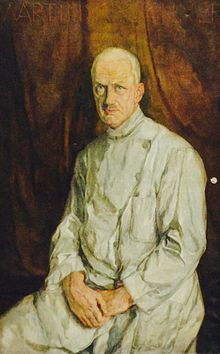 Martin Kirschner (born October 28, 1879 in Breslau , † August 30, 1942 in Heidelberg ) was a German surgeon and university professor , professor in Königsberg, Tübingen and Heidelberg.

Martin Kirschner's father was the politician Martin Kirschner (1842–1912), who came from a family of surgeons and surgeons and was the mayor of the capital Berlin , where Martin lived from 1893, went to school, attended the Luisengymnasium and in 1899 obtained his university entrance qualification. Kirschner's great-great-great-grandmother had a special reputation for her dexterity in pulling teeth.

Kirschner studied medicine (after failing his Abitur once ) from 1899 to 1904 at the Albert Ludwig University of Freiburg , the University of Zurich , the Ludwig Maximilians University in Munich and the Kaiser Wilhelms University of Strasbourg . In Strasbourg, he was in 1904 with a thesis on syringomyelia and tabes dorsalis to Dr. med. PhD. He began his medical work as an assistant to the internist Rudolf von Renvers in the Moabit hospital . In 1906 he accompanied Wilhelm Ernst (Sachsen-Weimar-Eisenach) on a trip to Ceylon and India. After military service in Munich in 1907 as a military doctor with the Royal Bavarian 1st Field Artillery Regiment "Prince Regent Luitpold" and the 1st Heavy Cavalry Regiment, he became Erwin Payr's assistant in 1908 at the Surgical Clinic of the Royal University of Greifswald . With him he moved to the Albertus University in Königsberg in 1910 . With Paul Leopold Friedrich , who took over the Königsberg chair in 1911, Kirschner completed his habilitation in 1911 with a pioneering thesis on free tendon and fascia transplantation. In 1912/13 he led the Red Cross expedition in the Balkans. In Sofia and Adrianople he gained his first experience in war surgery and then worked as a senior physician and adjunct professor in Königsberg. After the beginning of World War I he was consulting surgeon of the III. Royal Bavarian Army Corps . In 1915 he was commissioned to represent his sick boss Friedrich in Königsberg. He has been a professor since 1916 and fundamentally rebuilt the clinic over the next five years. In 1921, 141 beds were available here. In 1916 he married Eva Kapp , a daughter of the general landscape director Wolfgang Kapp .

As the successor to the suddenly deceased Georg Clemens Perthes , Kirschner followed the call of the Eberhard Karls University of Tübingen in 1924 , where he became full professor in 1927 and a new surgical clinic was built according to his specifications and plans. Kirschner's operating theory was built into the foundation stone of the Tübingen clinic.

He turned down the call of the Ruprecht-Karls-Universität Heidelberg in 1932, at that time the “worst of all surgical clinics in Germany”, because he did not receive the promise he had asked for an immediate new clinic to be built. He accepted the second call to Heidelberg with a binding commitment to build a new clinic in 1933 and became professor of surgery there. By 1939, the then ultra-modern clinic in Neuenheimer Feld was built under his leadership , where it is still located today. Kirschner was chairman of the German Surgeon Congress in 1934, at which he was honored in a speech by his friend Ferdinand Sauerbruch . From 1934 he was an advisory surgeon in the Reichswehr and the Wehrmacht , and from 1940 in the western campaign .

Kirschner's passion has been mountaineering since his time in Zurich. Kirschner's life was dominated by logical thinking and factual knowledge. He felt it was his duty to serve the truth of science. At times in the clinic he was adamant and hurtful.

At the age of 62, Kirschner (like Johann von Mikulicz ) died of gastric cancer . On January 1st, 1943, Karl Heinrich Bauer took over the surgical clinic with 440 beds that Kirschner had brought up to date. The son Hartwig Kirschner was a recognized surgeon in Hamburg.

Kirschner was co-editor of various surgical journals as well as the initiator and collaborator of standard surgical works of his time. He founded the most important German trade journal today, Der Chirurg . He particularly enriched anesthesiology , for which he developed high pressure local anesthesia, segmental spinal anesthesia and intravenous tribromoethanol anesthesia. Connected with his name is the invention of the rotating drill wire ( Kirschner wire ) for extension and osteosynthesis in the context of fracture treatment . Further milestones of his surgical work were the first success with Trendelenburg's operation for the treatment of pulmonary embolism (surgical removal of an embolus from the pulmonary artery) on March 18, 1924, the synchronous abdominosacral operation for rectal carcinoma and in 1920 in Koenigsberg the formation of a replacement esophagus through the A tube-shaped stomach that is pulled up to the neck, a procedure that is still used today. In the opinion of the experts, such a juxtaposition of the stomach and upper esophagus was initially considered impossible, because the diet, which was decisively changed by the relocation, made insurmountable difficulties. In addition, as early as 1926, Martin Kirschner established the guidelines for the treatment of peritonitis that are still valid today . His call for emergency medical treatment at the scene of an emergency, put forward in 1938, tested and expanded during the Second World War, revolutionized the rescue system and is still valid today.

He is also known as the founder and editor of the general and special surgical operation theory at Springer Verlag (from 1927). From 1950 it was edited by Rudolf Zenker and then continued by Georg Heberer and Rudolf Pichlmayr . 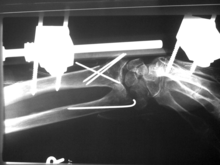 X-ray of a distal forearm fracture, reduced and stabilized with Kirschner wires and an external fixator

Surgery Ordinaries at the Albertus University

President of the German Society for Surgery