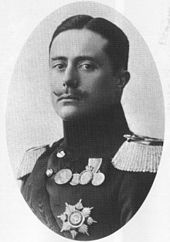 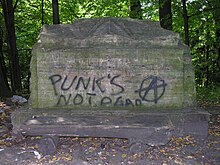 Grave of Wilhelm Ernst in Heinrichau

Wilhelm Ernst was the older of the two sons of Hereditary Grand Duke Karl August von Sachsen Weimar-Eisenach (1844-1894) from his marriage to Pauline (1852-1904), daughter of Prince Hermann von Sachsen-Weimar-Eisenach . He followed his grandfather Carl Alexander as Grand Duke of Saxe-Weimar-Eisenach in 1901, as his father had died in 1894. As heir to the fortune of his grandmother Sophie , Wilhelm Ernst was considered the richest German prince of his time. Initially, from 1881 to 1889, Karl Muthesius, later director of the seminary in Weimar, was hired to instruct the prince. Then he came into the care of the senior teacher Karl Georg Brandis , who then headed the university library in Jena from 1902 to 1926 . From 1886 to 1895, Captain Max von Griesheim was responsible for military education. After completing his military training, Wilhelm Ernst became General of the Infantry in the Prussian Army on September 13, 1911 . He was chief of the infantry regiment "Grand Duke of Saxony" (5th Thuringian) No. 94 and of the Thuringian Hussar Regiment No. 12 and stood à la suite of the 1st Guards Regiment on foot and the 1st  Sea Battalion . In the Saxon Army he held the rank of general of the cavalry and was also chief of the carbine regiment (2nd heavy regiment) .

From 1898 he was a member of the Corps Borussia Bonn .

Wilhelm Ernst let a large part of his significant financial resources flow into the promotion of culture. Although the Grand Duke was described as amusing and "turning the Prussian officer out", he created the New Weimar with it . Hans Olde , Harry Graf Kessler , Henry van de Velde and Adolf Brütt were appointed to Weimar. The Grand Duke supported the University of Jena with the new building of the college building based on designs by the Munich architect Theodor Fischer and had the new Weimar court theater built by the Munich architect Max Littmann , who was then known as the renovator of the theater . The publisher Eugen Diederichs moved to Jena, the writer Johannes Schlaf to Weimar.

Wilhelm Ernst later promoted the conservative Prussian forces more and more, so that Weimar soon became a center of völkisch-nationalistic conceptions of art. The sociologist Max Weber therefore called Wilhelm Ernst “a mockery of this place”.

In the course of the erection of the monument to Carl Alexander - created by the sculptor Adolf Brütt - the old town as a whole was separated from the development of the New Weimar and Art Nouveau by a protective ordinance . The portrait bust of Wilhelm Ernst in marble commissioned by the state was created in 1911 by Brütt's successor, the sculptor Gottlieb Elster .

Abdication and exile in Silesia

One of the last official acts of Grand Duke Wilhelm Ernst at the time of the November Revolution of 1918 was the appointment of Walter Gropius . The soldiers' council under the leadership of the Social Democrat August Baudert forced the Grand Duke to abdicate on November 9, 1918. Baudert described Wilhelm Ernst as the "most hated" prince in Germany. Wilhelm Ernst, however, was given the opportunity to hand over government responsibility to hands that seemed suitable to him. Shortly before that, Weimar citizens had approached the Grand Duke with the request that they do everything possible to prevent the parliamentary system. Shortly before his abdication, Wilhelm Ernst remarked: “I had done everything I could. I still had a lot of good plans. "

Wilhelm Ernst moved to his private property in Schloss Heinrichau in Silesia, where he lived until his death; in the park there is also his grave. After the prince compensation , the entire inventory of Allstedt Palace was moved to Heinrichau.

In the dispute agreement between Wilhelm Ernst and the "Weimar area" of November 1921, it was regulated, among other things, that Dornburg Castle should be given to the Goethe Society as a gift.

Wilhelm Ernst was considered a complicated personality; brutal, withdrawn and quick-tempered. Count Kessler, who Wilhelm Ernst blamed for his failure in the radical conception of art, described him as a "pathological object", Baroness von Spitzemberg as a "completely uneducated and foolish prince".

The prince was particularly unpopular in the Netherlands, where he was temporarily considered the presumptive heir to the throne (see below). Count Dumonceau describes him as "outwardly not particularly attractive, small and rather fat". Miss van de Poll, a lady-in-waiting to Queen Emma , reports: “The Hereditary Grand Duke is a small, ugly and noisy man who made me uncomfortable at dinner by speaking out loud across the table that he had heard that I was there Able to speak German fluently, which he found strange. "

Claim to the Dutch throne

As the grandson of the Dutch princess Sophie von Oranien-Nassau , Wilhelm Ernst stood behind Queen Wilhelmina in the Dutch succession . The Netherlands feared a possible German influence over their country, if not its annexation.

To prevent this, consideration was given to changing the constitution to exclude Wilhelm Ernst from the line of succession. Ultimately, however, a different decision was made. In the event that Queen Wilhelmina died without an heir to the throne, Wilhelm's descendants would have to choose between the Weimar throne and the Dutch throne. With the birth of Princess Juliana (1909-2004), the probability that a member of the Saxon-Weimar-Eisenach family would ever ascend the Dutch throne decreased considerably. Another constitutional amendment in 1922 decreed that the succession to the throne would in future be restricted to descendants of Queen Wilhelmina. Thus, any possibility for the House of Sachsen-Weimar-Eisenach to ascend the Dutch throne one day has finally disappeared.

After there had been speculation about a marriage between Wilhelm Ernst and the imperial daughter Margarethe , his first marriage in Bückeburg was on April 30, 1903, with Caroline (1884–1905), daughter of Prince Heinrich XXII Reuss zu Greiz . The marriage remained childless. His second wife was on January 4, 1910 in Meiningen Feodora (1890–1972), daughter of Prince Friedrich von Sachsen-Meiningen ; with her he had four children: