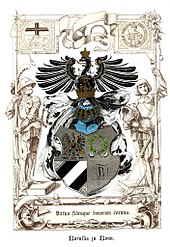 Coat of arms of the Corps Borussia Bonn

Crown Prince Wilhelm as a Bonn Prussian, around 1901 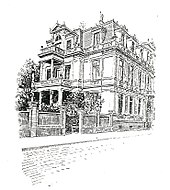 Former house of the Corps in Kaiserstr. 52 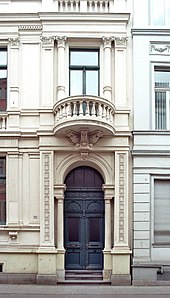 Entrance portal of the former corp house in Kaiserstr. 52

The Corps Borussia Bonn is a corps ( student union ) in the Kösener Senioren-Convents-Verband (KSCV), one of the oldest umbrella organizations of German student associations. The corps is obligatory and colored . Students and former students of the Rheinische Friedrich-Wilhelms-Universität can become members. The corps members are called "Bonn Prussia".

Borussia has the colors "black-white-black" with silver percussion . A white striker is also worn. The Prussian Foxes wear a fox ribbon in "black and white with a narrow black border" with silver percussion. The motto is Virtus fidesque bonorum corona! (German: "Virtue and loyalty are the crown of the good").

The Corps Borussia is a member of the Kösener Seniors Convents Association (KSCV) and is one of the signatories of the Bonn SC comment . Today the Bonn Senior Citizens' Convention consists of the five Kösener Corps Borussia, Guestphalia , Hansea , Rhenania and Saxonia .

With the Corps Saxo-Borussia Heidelberg and the Corps Saxonia Göttingen , the Corps Borussia forms the White Circle in the KSCV due to old cartel relationships .

The Corps Borussia was founded on December 22nd, 1821 by students at the University of Bonn. It has been a member of the Kösener Seniors Convents Association (KSCV) since 1856.

In 1864 and 1883, the Corps provided the local speaker in Kosen . The corps bow bearer Alexander von Claer supported Leonhard Zander in 1881 in his Kösener reform initiative.

At the time of National Socialism , the role of the Prussian elite between obedience and conscience was also reflected in the Corps Borussia. One of the resistance fighters of July 20, 1944 and a member of the Kreisau Circle , Count Peter Yorck von Wartenburg , was a Prussian from Bonn, as was the German ambassador to the USA, Friedrich von Prittwitz and Gaffron , who was the only ambassador to step down from his post after Hitler came to power. Friedrich-Karl von Zitzewitz , who also belonged to the resistance and was still indicted in January 1945 before the People's Court under its chairman Freisler, survived because Berlin was conquered by the Russians before the last hearing. Other members of the corps, such as the banker and treasurer of the Friends of the Reichsführer SS , SS-Brigadführer Kurt Freiherr von Schröder (1889–1966), or the SA group leader August Wilhelm Prince of Prussia (left the corps in June 1934) were active National Socialists .

As early as 1933, under pressure from the National Socialist regime, the KSCV had changed its statutes so that all corps belonging to it were forced to exclude members with Jewish descent or with Jewish wives from the corps association. In the Corps Borussia this affected the comparatively high number of eleven members. The exclusion of these corps brothers was categorically rejected jointly by the active corps and the AH Association in the summer semester of 1934.

Like the vast majority of the other corps - only five Kösener corps rejected the clause from the outset and dissolved within a short time - the Corps Borussia continued to pursue a delaying tactic in the hope of success in the ongoing negotiations of the KSCV about a compromise. Finally, in September 1935, the corps was given a deadline of 15 October, within which the Aryan paragraph was to be implemented. Before the general assembly called for this reason on October 13, 1935 in Berlin, the chairman of the AH Association, Bodo Graf von Alvensleben , urged some of the corps brothers affected to fall victim to the band, which is said to have caused a clear dissatisfaction at the beginning of the meeting. After Count Paul Yorck von Wartenburg protested passionately against the fact that a "voluntary" resignation by some corps brothers had even been considered, declared his resignation from the corps and had left the assembly, the general assembly passed the unanimous resolution to dissolve the AH-Verein, and the active corps followed with an equal resolution. The final reports from the Kosen liquidation office show that the Corps Borussia, with its liquidation resolution, is one of the twelve corps that have not decided to exclude members of Jewish descent or Jewish wives.

The corps was re-established in 1949 and is still largely recruited from members of German aristocratic families.

Wikisource: Share of the Bonner Preußenkneipe  - sources and full texts